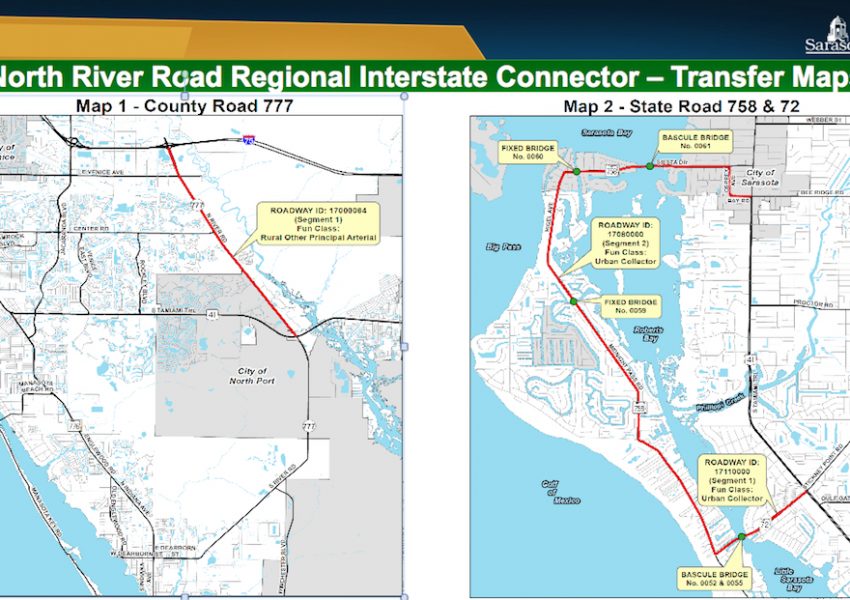 A new timeline has emerged as Sarasota County staff and representatives of the Florida Department of Transportation (FDOT) work to finalize a swap involving River Road and roads on Siesta Key.

On Feb. 5, County Engineer Spencer Anderson notified Assistant County Administrator Mark Cunningham via email that the final draft of a Road Transfer Agreement (RTA) could be completed in April, for County Commission review. Staff received a copy of FDOT’s draft revisions for the agreement on Feb. 1, Anderson added. Those were under staff review, he wrote, “and will be processed for Board consideration.”

Among its facets, that Road Transfer Agreement is expected to define terms for FDOT to make improvements to the 90-degree curve on State Road 758 at the Higel Avenue/Siesta Drive intersection on Siesta Key, Anderson pointed out. Last year, during a presentation about tentative terms of the road swap, Anderson explained to the County Commission that staff was hopeful that FDOT would consent to adjusting that sharp curve. Numerous serious accidents have taken place at the site over the years, as a neighborhood organization on north Siesta Key — Make Siesta Drive Safer — has illustrated after reviewing public records.

In exchange for the state taking over River Road, the county will assume authority over Stickney Point Road and State Road 758 west of U.S. 41, except for the two drawbridges. The affected segments of State Road 758 are part of Siesta Drive, part of South Osprey Avenue, Bay Road, Higel Avenue and the part of Midnight Pass Road north of the Stickney Point Road intersection on Siesta Key.

For decades, county leaders were able to achieve only limited progress in their efforts to improve River Road, which is the primary hurricane evacuation route for South County and part of Charlotte County. Construction of thousands of new homes in the coming years in Venice and North Port — plus construction of a new Spring Training facility in the West Villages for the Atlanta Braves — underscored the urgency for county leaders, they said, to find a way to gain state support for the major projects needed on River Road.

In September 2017, then-County Administrator Tom Harmer announced that discussions about a potential road swap had begun. If River Road were under control of the state, he explained, FDOT representatives said they would be able to speed up the timetable for the improvements.

In January, County Administrator Jonathan Lewis explained that FDOT project adjustments involving River Road — which were announced in December 2018 — had necessitated revisions of details that already had been worked out for the road swap. County staff originally had hoped to complete the swap before the end of 2018, but those changes delayed the process, Lewis said.

In his email, Anderson noted FDOT’s decision to accelerate funding for the construction of the improvements to River Road — including its widening — from West Villages Parkway to Interstate 75 to 2021, instead of 2024.

As of Feb. 4, Anderson continued, FDOT had indicated that it would provide an initial draft of the RTA to the county no later than Feb. 28. If that is received as expected, Anderson continued, staff will review the proposed agreement with the Office of the County Attorney, “negotiate any necessary changes with FDOT and process a final RTA for Board consideration in April 2019.”