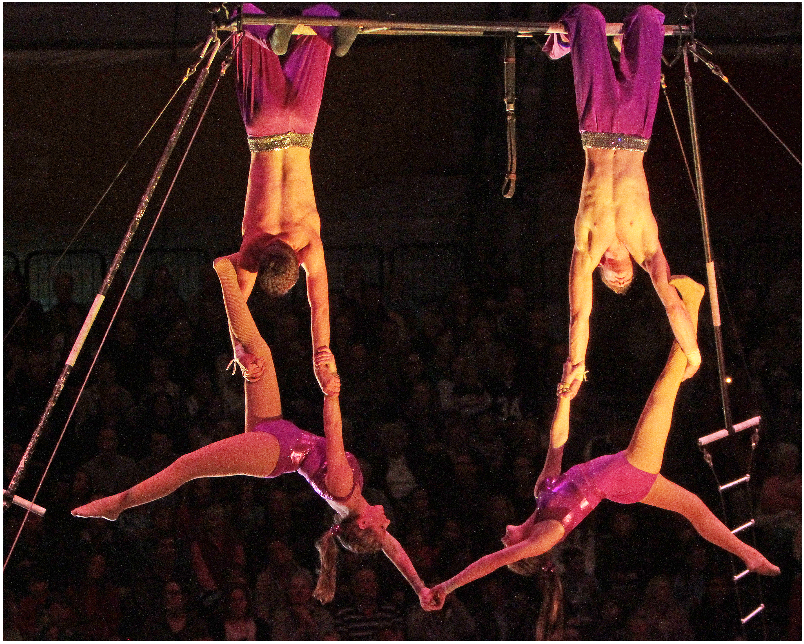 The Greatest ‘Little Show’ On Earth!
By Diana Colson

In April, Sarasota’s own SAILOR CIRCUS presented its 64th annual Spring Show, and it was truly spectacular! All of the performers attend schools in either Sarasota or Manatee Counties, and have devoted weeks and sometimes years of after-school hours to practice.  Under the Big Top, these young enthusiasts throw their hearts into the ring, much to the delight of an adoring audience.

The April performance was dazzling! Four high school students flew breathtakingly through the air on the flying trapeze while younger kids skittered about on globes.  There was a variety of aerialists, acrobats, wire-walkers and comedy routines.  There were impressive hand-balancing acts, dramatic performances on teeter-boards, lyrical acts on silks, and intricate choreography performed on unicycles. There were acts using hula hoops, juggling, Spanish web, and so much more! It was an astonishing exhibition of talent and verve with approximately 100 children performing.

SAILOR CIRCUS has for 64 years been one of Sarasota’s most unique offerings. Until 2004 it operated as a subsidiary of the Sarasota County School Board. In 2004, it fell under the operations of the Police Athletic League of Sarasota County, Inc.  Then, in 2011, it became a program of the not-for-profit organization known as Circus Sarasota. Today, such international circus performing artists as Nik Wallenda, Encho, Trio Moscow, and the Platchov Duo deliver workshops and hands-on training in various circus disciplines to Sailor Circus youth.

So—how does a kid get involved?

I called Susan Loeffler, the Sailor Circus Program Director, and asked her that question. “We usually get students through word-of-mouth. Students mainly get interested in Sailor Circus by coming to one of our performances. Many have friends who are performing. Once interested, they can phone for information.”

To study circus during the summer, students ages 6 to 15 can attend Circus Summer Camp. All training takes place at the Sailor Circus arena at 2075 Bahia Vista St.  Five sessions are offered, which vary in length from a 3-day mini-camp to a 10-day session. Information on this extraordinary summer camp can be found at CircusSarasota.org or by calling (941) 335-9335.

When it comes to enrolling in the regular school-year program, registration begins the week before school starts.  Once a student is registered, he or she goes through an orientation before deciding on the circus art they find most intriguing. Kids are taught by retired circus professionals as well as Sailor Circus alums. Glamorous Susan Loeffler is herself an alumna, as is Sarasota’s own Dolly Jacobs.

There are two different training sessions during the regular school year: one in the fall (September through December) and one in the spring (January through April.)  Children enrolled in the fall session train for the Holiday Show, which has six performances. Children enrolled in the second session train for the Spring Show, which has nine performances.  Many children become so enthusiastic about working under the Big Top on Bahia Vista that they sign up to perform in both shows.

At first, younger students attend training sessions only twice a week. As show time grows closer, however, they sometimes rehearse as many as five times a week. It’s a serious commitment, with young people practicing ten to twenty hours a week, depending on age level.

It’s also a commitment for parents. In addition to getting children to training and rehearsals, parents are required to volunteer 25 hours a session.  This might mean making popcorn at performance time, or sewing costumes in advance of the show. Sailor Circus has a large base of volunteers. There are three ladies in the costume department who deserve special accolades for creating new costumes and refurbishing the old. Their heroic work is supplemented by the occasional purchase of brand new costumes ordered through a catalog.

Sailor Circus has an amazing history.  It was founded in 1949 as part of the Sarasota High School gymnastics program. In 1952, Warner Bros. made a 30-minute short-subject movie shown in theaters nationwide that featured our own Sailor Circus. In 1973, it traveled for six weeks to Fairbanks, Alaska. In 1976 it not only appeared on the “Today Show” with Barbara Walters, it also performed in the Macy’s Thanksgiving Day Parade in NYC. In 1985 it spent 43 days performing near Fufuoka, Japan. In 1988 it traveled to Lima, Peru, for a five-week tour.

By the 1990’s the world changed and the chance to go on the road diminished. Today Sailor Circus is a non-profit organization which provides students in 4th grade through 12th training in circus performance. It is housed in a fabulous arena, a one-of-a-kind structure located in central Sarasota at 2075 Bahia Vista Street, 34239. Today this 4-ring youth circus is known worldwide as “The Greatest ‘Little’ Show on Earth