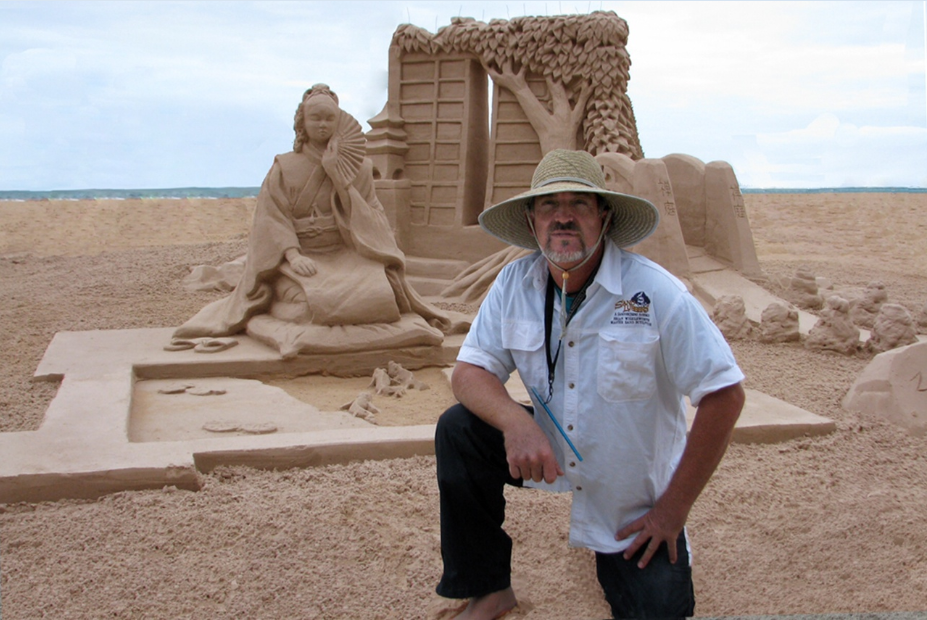 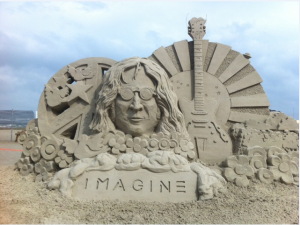 Yup—I spelled that one right. Not only is Brian a Master Level sand sculptor, he is the designer and creator of the Siesta Key Crystal Classic Master Sand Sculpting Competition. Founded in 2010, Brian works in partnership with the Siesta Key Chamber of Commerce, The Greater Sarasota Chamber of Commerce, Sarasota County Parks and Recreation, Mote Marine Laboratory, and the Sarasota Convention and Visitors Bureau. Now in its 4th year, the event has proved to be a resounding success.  The Competition is a favorite with professional sand sculptors from all over the world because of the crisp beauty of Siesta’s pure white sand.

Brian Wigelsworth is also the Sand Coordinator for the Crystal Classic. His main responsibility is to see that the best Master sculptors are invited, to oversee their transportation arrangements, and to insure that they have what they need to create their works of art.  Brian also designs the plot layout for the event and decides on the centerpiece sculpture upon which all entrants will work together. He also sets up the news desk, organizes the Photo Op sand sculptures, and sees to a myriad of other pesky details that make the event run like clockwork.

Brian was a Military Brat.  His father was a Missile Commander in the Air Force who was involved in the Titan Missile Program.  As happens in the military, the family moved around a lot, living mostly on coastal bases. Brian grew up playing on one beach or another, never dreaming that in his late forties he would discover a whole industry of master sand sculptors who actually made their living “playing in the sand.” 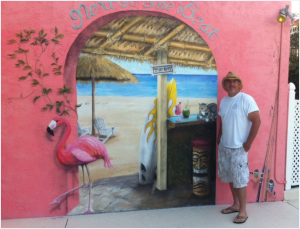 He is certainly no stranger to the arts. For many years he was a commercial illustrator in Minneapolis, and has worked in a variety of mediums, including stained glass, wood and tiki pole carving, large scale murals, and airbrush art.

One day Brian and his wife left Minneapolis and moved to Sarasota. “Trudy is my total inspiration. We’ve been together for over 30 years!”  He became involved in a lot of things, from restaurant management to home remodeling. More importantly, he began to participate at Siesta Key’s local amateur sand sculpting competition held every spring.  Before long, he was winning top honors as an amateur. A passerby saw his work on Siesta Key and asked if he would like to do sand sculptures for beer displays inside a group of nearby Publix and Walmart stores. 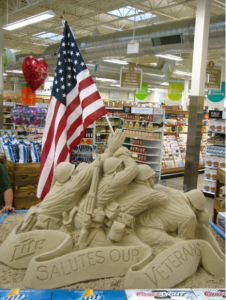 Brian enthusiastically agreed, located a sand quarry out at Lakewood Ranch, and proceeded to begin creating 40 sand sculptures on site at stores all around the Bay Area from Tampa to Fort Myers. It was a big job, and he soon found he had to enlist helpers.  Sand was wheeled in by the wheelbarrow, delivered to a store early in the morning, and Brian got to work, taking up to two days to finish a single piece.  Soon, he had exceeded the qualifications necessary to compete in Sand Sculpting at the Master Level.

He was recognized for exceptional work and invited to a master event.  He competed in the Fort Myers Beach American Championships, where he found himself in a totally different class of competition. “These artists were amazing!  I was a beginner all over again.”

As he worked the Fort Myers Beach sand, he came to realize that the sands of Siesta Key had attributes that were truly unique.  You see, a beach like Siesta is rare anywhere the world.  It has minimal shells because of multiple submerged sand bars that filter the sand to the beach. (Most other beaches of the world are covered with coarse sand and a multitude of shells—characteristics that weaken sand sculptures and eventually cause the larger ones to topple over.) Siesta Key’s fine sand, however, is perfect for building sand sculptures.

From the onset, Brian’s plans for the Crystal Classic were grandiose. He felt the event should be one that gives back to the beach.  He chose Mote Marine’s Sea Turtle Projects as the beneficiary of the competition. Mote not only donated their volunteer force, they brought their non-profit status which helped to make the event run smoothly.  Seeing the potential, other organizations enthusiastically jumped in. The group joined forces as Founding Partners, and in no time at all, the Crystal Classic became a local Siesta Key tradition and a draw for tourists. Today, the four day event attracts more than 70,000 attendees.

Brian brought in his sister, Linda Craig, into the project.  As the daughter of an Air Force “Lifer” and the mother of a deployed soldier, Linda runs Manasota Operation Troop Support (MOTS).  She was put in charge of the $5 Photo Op sculptures.  Here visitors find sculptures with a holiday theme. Families can be photographed alongside these sculptures and use those pictures in Christmas cards and photo albums. All proceeds, of course, go to MOTS.

Today Brian is often called upon to create sculptures for special events such as weddings, engagements, parties, fairs, festivals, corporate events, and trade shows. “A lot of times these events happen at a resort. I build the sculptures right on the spot.”

I loved the tale Brian told about building a special sand sculpture for a man who was ready to “pop the question.” (One of many engagement sculptures he has made for the Marco Island Marriott.)  Brian worked in secret all day on the piece. Finally—just as the sun was setting—the couple walked down the beach and came upon the sand sculpture. It took the young lady totally by surprise.  The composition consisted of rose petals, candles, and hands holding a ring box. Inside that box was a real diamond engagement ring.