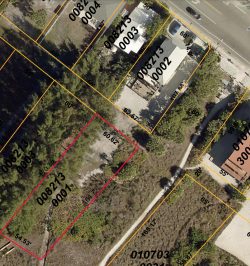 As sand has continued to accrete on Siesta Key’s beach, more and more property that once was completely or partly underwater has become increasingly attractive to developers.

Still, within the past four years, the Sarasota County Commission has remained stalwart in denying petitions for Coastal Setback Variances to allow new homes to be built seaward of the county’s Gulf Beach Setback Line (GBSL) — the figurative line in the sand.

As Weiqi Lin, a member of the county’s Environmental Permitting staff, explained to the commissioners during a hearing earlier this year on just such a petition: The GBSL was established in 1978 “to protect the public interests and your investment.”

Nonetheless, within recent weeks, yet another Coastal Setback Variance petition has been filed, this one involving plans for a three-story, single-family home and pool on property that lies west of the house located at 654 Beach Road. The construction would be on land that is completely seaward of the GBSL. The applicant, according to documents county staff received on May 18, is Saba Sands II LLC, whose manager is attorney William A. Saba of Sarasota.

Saba Sands II also wants to use Beach Access 10, which is adjacent to the land, as access to the house, according to the materials submitted to the county.

Attorney Robert Lincoln of Sarasota, who is serving as the agent for Saba Sands II, says in the application that a denial of the variance would be an unjust act.

In the introduction to an environmental study of the property provided to county staff, the Steinbaum and Associates ecological consulting firm in Sarasota wrote

that, as indicated by Lincoln, the Saba Sands II parcel “is the only privately owned property (from the County Beach to property north of the Terraces) that is both west of Tenacity [Lane] and not owned by the same entity as the landward lot (along Beach Road). As further indicated by Mr. Lincoln, such unique aspects are reasons that a denial of the right to build on the subject lot would in turn deny the applicant all property rights.”

The application itself states, “The requested variance is the minimum variance necessary to permit reasonable use of the property.”

Opposition to the plans already has begun mounting among Siesta Key residents, led primarily by Sherrill Mills, who has lived for 45 years at 560 Beach Road. She owns the parcel seaward of her house, which is adjacent to the site where Saba Sands II proposes the new structure.

Asked about the status of the application, county spokesman Jason Bartolone said in an email, “It is in the completeness review stage and therefore there is no date set for a public hearing at this time.”

The proposed three-story house would have a footprint of 1,590 square feet, the application says, while the walkways and driveway would cover an additional 1,274 square feet.

The application explains that the subject property “has been extended by accretion since it was platted and now has a total area of [more than 37,000 square feet], or .85 acres.”

Moreover, the application says that all of the proposed development would “lie behind the line of construction established by the Tiffany Sands condominium [complex],” approximately 175 feet to the north.

It adds, “The Subject Property has been in separate ownership from any other property, developed or not, since prior to the County’s adoption of the GBSL ordinance … Given the unique circumstances, and [Saba Sands II’s] lack of alternatives for developing the Subject Parcel or using its development rights on adjacent property,” the application says, “denying the variance request would be [particularly] unjust and unreasonable.”

Sherrill Mills, who has lived for 45 years at 560 Beach Road — just northeast of the Saba Sands II property — has been leading the opposition to the development plans. She explains in an essay she has distributed to the Siesta Key Association (SKA), friends and neighborhood groups, “Many lots along Beach [Road] are double lots like mine. I own the lot my house sits on as well as the seaward lot.”

Her neighbor to the south, she points out, “whose house abuts Access 10, does not own the lot seaward of his house.” Instead, she notes, that is the land owned by Saba Sands II.

“IF SABA SANDS IS GRANTED THESE VARIANCES THE PRECEDENT ESTABLISHED BY THAT ACTION WILL OPEN WIDE AN ENTIRELY NEW ROW OF DEVELOPMENT ON SIESTA BEACH SEAWARD OF THE GULF BEACH SETBACK LINE AND SEAWARD OF ALL EXISTING BUILDINGS!!!” she adds.

She already has “been made aware of other beach lot owners who would rush in to develop their seaward lots,” she continues.

“The detriment to the environment and the beach would be irreversible,” she writes, “if the [county] commissioners accede to this plan [proposed by Saba Sands II].” She urges people to call and send letters to the commissioners to let them know “that you are WATCHING and that you CARE, (her emphasis again).”