Michael Shay doesn’t need to rely on reports from high-priced consultants or pore over arcane papers on coastal erosion to understand the important role the shoals and resulting sandbar off Big Pass play in protecting Siesta Key’s shoreline. He can simply look out the window of his home at Siesta Town House and see those benefits firsthand.

“On a nasty day you can look out beyond the sand out there and see the white caps kicking up and moving toward shore,” he explained on a recent warm, clear fall morning. “But when they reach the sand beyond that post,’ he continued, pointing to a wooden pass marker, “…well, there are no more white caps. They’re absorbed by the sand.”

And that’s no small thing for homeowners like Shay, tasked with the shared responsibility and expense of maintaining and protecting a property line defined by the temperamental Gulf of Mexico.

The Siesta Town House complex has perhaps 125 yards of seawall buttressed by large boulders facing the Gulf. “I don’t know what it would cost to replace that wall,” he said. “But I’d guess it could be a million dollars or more.”

Looking to the east, little more than the length of a football field separates the Gulf of Mexico from Ocean Boulevard where it passes in front of Siesta Town House. An aerial view from Google Earth taken in February of last year shows the sandbar and shoals off the property extending two-to-three times that distance out into the gulf. And it confirms Shay’s observation about how far from shore the surf breaks in the area, beyond the sandbar and the replenishing shoals to the west that sustain it (see picture accompanying this story).

Losing that sand to Lido Beach re-nourishment efforts worries homeowners like Shay. But it’s not just those living in the immediate vicinity that benefit from the offshore sand. Peeling back the buffering layer of protection it provides could expose the already vulnerable stretch of heavily traveled Ocean Boulevard to an even greater risk of flooding or wash out from any storm surge accompanying even a modest hurricane. The elevation of the roadbed as it passes Gleason Avenue is a mere 4 feet above sea level.

Just to the north, Higel Avenue traverses the narrowest section of the northern half of the Key. Here, it is just 220 yards from the Gulf-of-Mexico to bay waters near Coconut Bayou. The shoals and sandbar off Big Pass extend north adjacent to this portion of the Key too.

Again, with even a modest storm surge from a relatively minor storm, it’s not hard to imagine this choke point being inundated like Ocean Boulevard to the south, cutting off access to the Siesta Drive Bridge.

And what about a major storm delivering a stronger surge? It’s conceivable under such a scenario that the south bridge could be cut off as well. The Key is only a half mile across near the Excelsior Condominium, just north of Stickney Point…a hop-skip and a jump…as the F1 Tornado that traversed the property in early 2015 demonstrated.

In such a worst-case event, a majority of the Key’s population could be cutoff from the mainland altogether. Even assuming most residents would have evacuated prior to landfall, it could take months before those evacuees would be able to return to their homes.

Arguments like these may be dismissed by supporters of the Lido dredging project on the other side of the bay; many assume the motivation for Siesta residents opposed to the dredging plan is primarily to protect economic interests aligned with the island’s foremost engine of tourism, its #1 rated beach.

But a simple look at a map, or in the case of Michael Shay, a look out the window provides a powerful argument to the contrary, especially when accompanied by a reflection on this year’s Hurricane season and its impact on Houston, Florida and Puerto Rico,.

That’s not to minimize the aesthetic and economic importance of protecting what brings so many to our corner of the world: its world famous sand.

Boat Park for visitors and locals 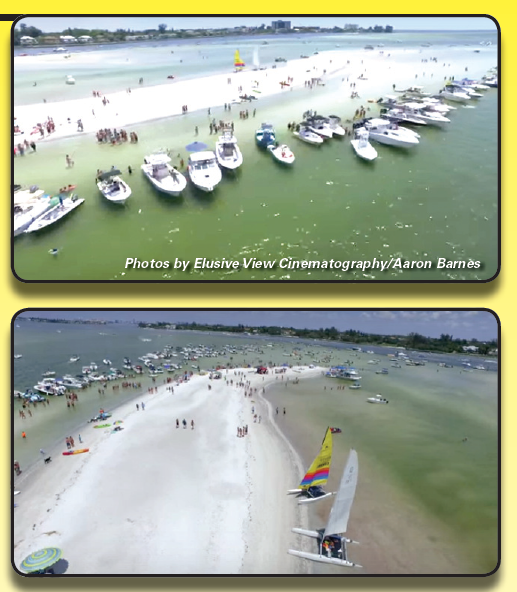 The sandbar at Big Pass has become a draw in its own right in recent years. Mason Tush, co-owner of CB’s Saltwater Outfitters, does a brisk business renting boats and jet skis to visitors. Anchoring off a sandbar is one of the experiences many tourists seek out.

“We usually have at least a few boats out there a day” he said in a recent interview. “It’s a lifestyle thing…hang out, drink beer, swim around, it’s something people look for when they come down here.”

Suzanne Sanzare agrees. She and her husband Jeff and their two teenage boys have taken their Robalo outboard on trips from their home near Ft. Lauderdale to ports of call as far away as the Exumas in the lower Bahamas. They’ve trailered their boat to Sarasota several times too, where they enjoy checking out the various beaches and sandbars near Big Pass.

“It’s just a real easy way to relax on a sunny afternoon,” she said in a brief interview last Sunday afternoon. “You can meet friends, people bring their dogs, just relax, play music…and to not have to worry about getting caught somewhere in bad weather far from shore, it’s a real plus.”

It seems word has spread about the Margaritaville vibe the spot offers.

Grammy nominated country music star Thomas Rhett and his wife were spotted there back in July. They even posted a video of the sunset they took in on Rhett’s Facebook page.

While it may not rival Siesta Beach in terms of popularity, it is definitely trending… among locals and visitors alike…another natural, water based attraction, full of local color, in perfect harmony with the lifestyle experience that comes so naturally in these parts.

The current plans to dredge Big Pass will undoubtedly destroy this natural treasure.