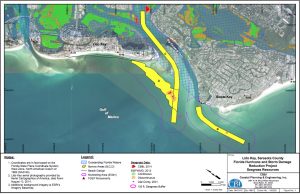 Late on Jan. 13, the Siesta Key Association (SKA) formally filed its petition with the Florida Department of Environmental Protection (FDEP), seeking an administrative hearing on the department’s Dec. 22, 2016 Notice of Intent to issue a permit for the dredging of Big Sarasota Pass to renourish South Lido Key Beach.

Three Siesta Key residents have joined the SKA in that petition, which says the pass “and the ebb shoals at the entrance of the Pass are part of a complex system that allows the transfer and sharing of sand from Lido Key onto the beaches of Siesta Key. The large-scale dredging of sand from [the system] as contemplated in the [FDEP] Permit will negatively impact the natural drift of sand onto the Siesta Key beaches, impact the navigation of Big Sarasota Pass, diminish storm protection for those living on Siesta Key and along Big Pass, and impact anyone who uses the shoals of Big Pass for swimming, boating, and fishing.”

The SKA has retained Hopping, Green & Sams of Tallahassee to represent it. The same law firm was successful in representing Siesta residents in 1994 when they fought a City of Venice proposal to dredge Big Pass for a beach renourishment project.

The evening before that petition was filed, the SKA directors announced during their monthly meeting that they had established the Siesta Key Environmental Defense Fund (SKEFD) as a means of raising tax-deductible contributions for their legal challenge of the proposed $19-million City of Sarasota/U.S. Army Corps of Engineers (USACE) project.

“The exciting thing about SKEDF,” SKA Vice President Catherine Luckner pointed out, “is that, once the Big Pass battle is won, SKEDF will forever exist to fight for the protection and preservation of Siesta Key’s environment.”

Luckner also reported during the meeting that the nonprofit “has certainly been willing to share [expert testimony]” with another Siesta nonprofit opposing the dredging of the pass: Save Our Siesta Sand 2 (SOSS2). She indicated that the two groups could collaborate on such action “to save on some expenses.”

SOSS2 Chair Peter van Roekens, she noted, served as an SKA director for many years.

Furthermore, Robert Luckner — Catherine Luckner’s husband and a member of the SKA Environmental Committee — took the opportunity of the Jan. 12 meeting to draw attention to policies of both the City and County of Sarasota that the SKA feels can be used as the basis for legitimate challenges to the Lido Renourishment Project.

With its Jan. 13 filing, the SKA joined SOSS2 and the Florida Wildlife Federation in seeking administrative hearings on FDEP’s Notice of Intent.

Along with Patton — who lives on Sandy Hook Road — the residents who have joined the SKA’s challenge are William Bortz, who lives on Rockwell Lane on Siesta Key; and Michael S. Holderness, who owns property at 99 Beach Road.

The Florida Wildlife Federation contends in its challenge that the proposed issuance of a 15-year permit for the project would be a violation of the federal Clean Water Act and that the application for the dredging does not comply with water quality standards the U.S. Environmental Protection Agency has approved for the State of Florida.

The SOSS2 petition argues, “The dredging of Big Sarasota Pass has been studied extensively,” and the only entities that agree that removing the volume of sand proposed will not result in irreparable damage are the City of Sarasota and the USACE.

In response to a SNL question, FDEP spokeswoman Dee Ann Miller explained, “Petitions filed with the department are first reviewed for sufficiency. If deemed sufficient, the petition is forwarded to the Division of Administrative Hearings (DOAH) for a judge to be assigned. The assigned judge then sets a hearing date based on availability of the parties and his schedule.”

Asked whether all the petitions would be consolidated for a hearing, Miller added, “[T]hat is something that varies from case to case and is a decision made at the discretion of the judge based on filings by the parties in the case and the unique characteristics and facts of each case.”

During the Jan. 12 SKA meeting, Robert Luckner discussed Environmental Policy 4.6.1 in the county’s Comprehensive Plan, which prohibits dredging in the Gulf of Mexico in areas under county control, “except to maintain previously dredged functional navigation channels and drainage canals.”

He showed the audience a map depicting the locations proposed for removal of sand from Big Pass. Area C, he noted, is a brand new channel the federal agency proposes to dredge to a depth of 10 feet, “right through the shoal where people park boats [near the north end of Siesta Key].”

County staff told SKA Director Dan Lundy that all of the borrow areas are in the city limits, Luckner continued. Referencing another slide, Luckner pointed out, “It doesn’t look to me like any of [Borrow Area] B is in the city limits.”

Nonetheless, he said, it appeared that city and USACE staff had tried to make it appear as though that is within city territory. “There are other ways to get them to tell the truth,” he said, “and sometimes lawyers are involved in this.”

SKA Director Dan Lundy added that if Borrow Area B is indeed within the county’s territory, the SKA could file suit against the county, the city and FDEP over the potential for a violation of the county’s Comprehensive Plan.

Yet another focus of the SKA’s research, Luckner continued, has been the city’s Comprehensive Plan policy 3.16, which prohibits the construction of groins except in the event of an emergency. The planning for the Lido project — with two groins — has been going on for years, Luckner said, “and the city has never declared an emergency.”