Best of the Beach Club: 70 years and counting 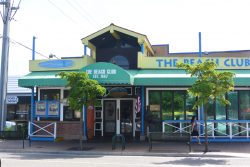 The slick, stylish nightclub marking its 70th anniversary this month (celebrated 9/2 featuring the Instigators) certainly belies the humble beginnings and questionable past of its seven decade history.

Since 1947, the Beach Club has been many things to many people. There’s not much on record of the Beach Club’s earliest years. It’s said that it began as a slightly-disrespectable, peanut-shells-on-the-floor hangout with mismatched tables and chairs, a long bar, miscellaneous motel ash trays, and a makeshift stage that could be moved or even removed to accommodate a larger-than-normal crowd of thirsty beachgoers, fishermen, and regulars.

As Siesta Key grew, the “BC” (as it was known) grew with it, changing through the decades to the flashy neon point you now see. By the 1960s and 70s, the Beach Club had cleaned up its act a bit, but was still gritty enough to feel just a little dangerous. Today’s newcomer would never suspect that in days gone by, bands performed in the unconditioned heat and smoky haze with darts flying past them to seek bull’s-eyes on the boards on either side of the stage, while a resident rat ran back and forth like a carnival shooting game target on a beam over the band members’ heads. (EUW, what?! Shhhhh…)

The 1980s brought a burgeoning Key population. Tomcat Blake, who moved down from St. Louis and lived right around the corner from the club, wandered in one night to hear locals play impromptu, unrehearsed, random tunes. “Someday I’m going to play on that stage,” he remembers thinking. And he did, becoming one of the truest blues players in Florida, touring Europe with the infamous Rock Bottom and the Cutaways before settling in France; his old time blues are a huge hit with French musicians and music lovers. Fellow ex-pat Mike Shannon, aka Dan Electro, tore up the BC with his band, The Silvertones, before settling in Barcelona, Spain, where he too has blues enthusiasts flocking to his shows.

John Prestia relocated here from New York and “really dug” the beach bar vibe. He played the BC as a solo act, in the duo Chuck and John (with Chuck Caudill), and with his band, Pirate. Now approaching his second decade based in Nashville working for Tim McGraw and Faith Hill, John’s favorite memory of the Beach Club is the night his band was wailing inside while hurricane sidewinds wailed outside. When the power went out, John grabbed his acoustic guitar and strolled among the dimly-candlelit tables, playing and singing, dodging raindrops that leaked through the dilapidated roof.

From 1990 – 2000 the Beach Club, under its manager James Bianci, really took off. Cleaned up a bit but still boasting the old ambiance of its original little fireplace and stage, it was bursting at the seams most nights, showcasing top local bands and singles (Shark/606, Twinkle, the DTs, Stryker, Eclipse featuring Lynell, Marc Mosby and the Instigators, Paul Galestro and The Blynders, Mindy Simmons, the Hurricanes, Callie Chappell, Randy Marsh and R.P.M.) as well as occasional surprise national bands like Bad Company, who showed up with James’ blessing to try out material they’d be performing soon on tour. Area natives now known worldwide (Neil Larson, Richy Kicklighter, Willie Royal, Gregg Allman) hit the BC to perform, often unannounced, creating a hot spot that drew not only from the tri-county mainland but well beyond.

No reminiscence of Beach Club history would be complete without mention of (trumpet fanfare) The Halloween Costume Contests. The diverse Key population was reflected in contestants’ costumes, ranging from extravagantly expensive and professionally made Marie Antoinettes, Chers, naughty librarians, and clumsy mermaids to homemade, sometimes hard to identify originals, including one winner no one will ever forget:
He stepped up on stage wearing a full-body grey trash bag he’d cut leg holes and arm holes in and overstuffed full of wadded newspaper. Face covered in grey makeup, hair hidden in a grey rubber swim cap, on top of which sat an upright little child’s plastic chair secured by a bungee cord under his chin.

The puzzled crowd threw out a few random guesses but quickly gave up. The contestant approached the mike, arms held out in a “what else?” gesture, and told the crowd he was “used gum stuck under a chair.”

Following a three-count of stunned silence, the room absolutely erupted, laughing judges jumping to their feet and wildly whooping and cheering. The disappointed contestants in the expensive elaborate outfits were not amused, but everyone else was. ( Best. Costume. EVER.)

And the Beach Club beat goes on, changing with the times. Instead of word-of-mouth you can nowadays find out what’s going on there by checking the website.