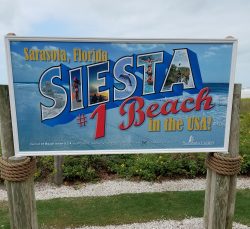 Given continuing frustrations of residents and visitors trying to find parking spaces at Siesta Public Beach, the Sarasota County Commission directed staff to work on proposals, including charging a fee, whose revenue could be used to provide more mass transit options.

County Administrator Tom Harmer said staff would look at how other beach communities handle parking demand, and then staff will propose some recommendations regarding how the Sarasota County commissioners might proceed in addressing the situation on Siesta.

“Paying is a very touchy issue,” Chair Paul Caragiulo pointed out, “but it is all in the approach.” If people understand how the money is used, they are more likely to accept a charge for parking, he added. “I think it’s a conversation we need to have.”

In fact, Caragiulo continued, whenever he talks with people about the situation at Siesta Public Beach, they generally end up asking him why the county does not charge visitors.

Commissioner Charles Hines suggested that residents would be allowed to purchase stickers that would allow them to park at the beach without any charge.

Commissioner Alan Maio raised the topic of the demand for parking on Siesta as he gave his board report during the July 11 regular meeting of the commission, held in Venice. Members of the public have accused the board of having “done nothing to fix the [situation] on Siesta,” he said. However, just within the past two years, the county added 143 spaces to the lot at Siesta Public Beach and 34 at Turtle Beach Park.

“We now are moving forward as time and permits allow” on creating an extra 140 to 150 spaces in a new lot on property the county’s Utilities Department owns on South Midnight Pass Road, he continued. When Sheriff Tom Knight ceases using a training facility on that parcel early this fall, Maio added, work can begin in earnest on a design for that space — as the board has discussed during recent budget workshops. (The parking lot also would encompass a turnaround area for the Siesta Key Breeze open-air trolley, as envisioned by commissioners and Siesta leaders.)

As for the latter, he noted, “Its worst month [May] — which exceeds everybody’s expectation — [saw] 600 [riders] a day. If one considers the average vehicle on the Key has at least two passengers, he added, that meant 9,000 fewer vehicles on the island’s roads.

Then Commissioner Hines told his colleagues that he drove his daughter and some of her friends to Siesta Public Beach on July Fourth. “I took [them] up there at 10 [a.m.], and the parking lot was closed,” he said. (Sgt. Jason Mruczek of the Sheriff’s Office told Siesta Key Association members on July 6 that the lot was full at 8:15 a.m. that day.)

With Siesta Public Beach having been named No. 1 in the United States again this year by Stephen Leatherman — Dr. Beach — the expectation is that the beach will continue to draw large numbers of visitors, Hines added. “We have to figure out a way to … make it painful to drive onto the Key, make it convenient and free to park your car someplace else and get on a trolley or public transit, and expand that service …”

Adding parking spaces on Siesta, Hines continued, is “never going to be enough, unless you want multiple parking garages all over the place, which no one on Siesta wants. Parking’s free. That’s another whole issue,” he added, drawing chuckles from some of his colleagues.

The county needs a long-time funding source for the trolley, Hines pointed out. Yet, people have been reluctant to talk about the county’s charging for parking at the beach.

“The trolley was a magnificent idea those folks [on Siesta] thought up,” Maio added. If the county could create parking options off the island and extend the trolley’s route to pick up those drivers and passengers, he said, that would be a solution. “I agree with all of that,” Chair Caragiulo replied.

The key for visitors who are used to the freedom personal vehicles provide them, Commissioner Michael Moran pointed out, is making certain they can get back to those vehicles quickly if they do use a mass transit system to reach the beach. In response to questions about the County Commission discussion, Harold Ashby, president of the Siesta Key Association (SKA), wrote in an email that he was unable to comment on behalf of the nonprofit, because the directors have not discussed the topic since he joined the board last year. “In due course,” he added, “SKA will address the topic and make its position known.”

Mark Smith, chair of the Siesta Key Chamber of Commerce, declined to comment when SNL spoke with him about the commission discussion.

In early February 2014, the issue of paid parking at the beach arose at an SKA meeting: A woman in the audience asked then-County Commissioner Nora Patterson why the county continued to let everyone park at the beach for free. “I’m not the proper spokesman,” Patterson replied. “I was on the other side of this issue.”

In 2008, Patterson was part of a 3-2 board majority that did approve fees for parking at county beaches. Subsequently, Shannon Staub, then the chair, changed her mind about the plan, and the commission scrapped the idea.

On July 11, Commission Chair Caragiulo told his colleagues, “I know it’s a dangerous conversation to have about people paying.” However, he added, he believes that if the county started out with just a small area where a fee was charged, over time, people would realize that paid parking is the only solution to the traffic congestion.