The ever changing Village 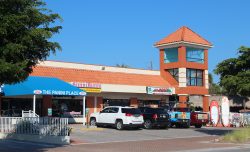 If all goes as planned, a new upscale steak and seafood restaurant will be open no later than early January 2018 in Siesta Village, Island business owner Chris Brown stated in a recent telephone interview.

“We think there’s a void” among Key dining establishments that that type of business will fill, he said.

Although Brown had narrowed down options for the company that will operate the restaurant, he declined to offer any details until after a deal had been sealed.

The location will be the site of the former Blue Que Island Grill: 149 Avenida Messina. That restaurant was just down the street from The Cottage and The Hub Baja Grill, both of which Brown also owns.

The Beach Club was Brown’s first venture into business in Siesta Village. A few years ago, he also bought the Siesta Market property and worked with the family behind Morton’s Gourmet Market in Southside Village to transform the grocery store and deli in the Village into Morton’s Siesta Market on Canal Road.

Siesta architect Mark Smith — who worked with Brown on the design of the new restaurant — stated back in May that the transformation of the Blue Que building would be an extensive one, as the remodeling would have to comply with Federal Emergency Management Agency (FEMA) flood elevation standards.

Through his CJB Property Development company, Brown bought the property in June 2008, paying $1.3 million for it.

Long-time Key residents will recall that for a number of years, the property housed Maximo, which featured cuisine with a South African influence.

This is not Chris Brown’s first attempt to create an upscale dining establishment with a focus on steaks.

In October 2013, the Sarasota City Commission nixed a proposed New Orleans-style redesign Brown sought for the historic Kress Building Brown had bought at 1400 Main St in downtown Sarasota. (The previous tenant was Patrick’s restaurant, which was forced out by the former property owner as part of that owner’s attempt to construct a high-rise condominium on the site.)

After Brown bought the Kress Building, he made the first application ever to the city’s Neighborhood and Development Services Department for “encroachment” of the right of way. Brown’s proposal was to “wrap” the Five Points structure with “galleries.” They would provide shade for the sidewalks and room for up to 78 café tables on a second-floor covered porch overlooking Main Street.

The new restaurant has not been the only project keeping Brown busy. On Nov. 7, he and business partner Mike Granthon — who manages The Hub, The Cottage and The Beach Club — became the new owners of the Key Corners Center 7. That complex, at the southwest intersection of Ocean Boulevard and Avenida Messina, is right across from The Hub and The Cottage.

The seller was Deborah J. Houghton, whose family had owned the property since 1986, Sarasota County Property Appraiser’s Office records show.

The acquisition will help considerably with the valet parking for his restaurants, Brown explained. Altogether, he will have about 150 spaces his valet service can use, he said; because the shops and the restaurant Another Broken Egg in Key Corners are closed at night, valets can double- and triple-park vehicles in the spaces at the plaza, Brown pointed out. “It’s really going to help the congestion. … We’re trying to get the parking as organized as possible.”

Brown also noted that, of course, the valet parking is complimentary. “I’m trying to solve issues,” he added.

Brown’s first order of business was cleaning up the plaza so it would look its best.

One tenant in Key Corners moved out about 10 days before Chris Brown closed on the plaza: Napoli’s, a long-time Village dining establishment known for its pizza and other Italian entrees.

Napoli’s long stood where Gidget’s Coastal Provisions is located in Siesta Village, next to SKOB.

On May 18, Timothy J. Jones of Sarasota, the sublessor of Key Corners Center, filed a complaint against Izzo, saying Izzo was $138,865.59 in arrears on rent “and other financial obligations … not inclusive of late fees, which is a default under the Sublease.”

A settlement agreement between Izzo and Jones, dated Oct. 2, said the case would be dismissed with prejudice — meaning it could be refilled if the parties did not fulfill the terms. Izzo and Jones were to handle their individual attorneys’ fees and costs, it added.

An order signed by Judge Frederick P. Mercurio on Oct. 4, affirming the settlement, indicated that back rent Izzo had paid over the past months would be returned to him. The amount noted in the order was $73,656.89.

Jones’ lien on the property dated to June 2013, when Izzo rented the space in Key Corners, the complaint pointed out.

A copy of the lease said the base rent was $6,500 per month, beginning in September 2013. (Jones waived the rent for July and August of that year, the lease said.)

Another new restaurant is planned on Ocean Boulevard in the Village.

On May 1, Jim Syprett and Jay Lancer bought the former Jo-To Japanese Restaurant property at 5218 Ocean Blvd. for $1,350,000, according to the records of the Sarasota County Property Appraiser.

At the time, Syprett stated he was not certain he and Lancer would seek a new restaurant tenant, but he pointed out that because of the Siesta Key Overlay District’s zoning regulations, that would be “the most beneficial use of the property.”

In early November, Syprett reported that negotiations were well underway with a restaurateur. He declined to offer any clues about those discussions, saying only, “I think the tenant will be somebody everyone will be happy to welcome [to the Village].”

He also could not provide an exact timeline for the conclusion of the negotiations, he said, but he indicated that it could come shortly after the deadline for Siesta Sand’s December issue.

While tenant talks have continued, work also has been underway to open up the front of the building’s first floor, Syprett noted; the goal is to create a patio-like atmosphere. That open area will extend about 12 feet from the corner on the south side of the structure, he added, stopping just before a side door by the driveway.

Sliding glass doors will be installed around the open area, Syprett continued, to provide protection from the weather, as needed.

It will be fun for diners to have a view of the activity in the Village and to be able to speak to passersby they know, he added.

“I think it will look much better than it’s looked for a long time,” he said of the building. “I think it’ll be much more inviting.”

According to Sarasota County permitting records, Syprett and Lancer also have invested in new plumbing and electrical equipment and a new air conditioning system, along with the new façade, at an estimated cost of $150,000. William T Enterprises, which does business as Pittman Construction of Sarasota, is the building contractor for the project, the county records note.

The permit was issued on Oct. 4, the county document shows, with an expiration date of April 2, 2018.

The recently completed façade for the iconic Lobster Pot, located in the heart of the Village, was completely unplanned but necessary after a truck plowed into the patio in front of the restaurant back on July 4, 2017.

Co-owner, Glen Medeiros recounts the harrowing experience and counts his blessings.  His son and partner in the business, Tony, had given him the day off for the July Fourth holiday. “Normally, I work on Tuesdays,” he noted, “and I sit at that table where that truck went through,” placing orders. “So I am blessed,” he said. “I am blessed.”

The crash occurred around 9:45 a.m., based on reports. The driver apparently had a medical problem. The truck was headed north on Ocean Boulevard, reports said, when it veered into the Lobster Pot.

Not only was he spared injury, he pointed out, but so were bystanders. Normally, Medeiros said, at that time of morning, 20 to 25 people are lined up in front of the restaurant as they wait in line to buy treats from the adjacent Meaney’s Mini Donuts. “Luckily, they were on the opposite side,” in front of Morton’s Siesta Market, he noted.

Even though he was supposed to be taking off July 4, Medeiros continued, he had decided to come in anyway and help out his son. “It was a pretty scary situation,” he added of the truck’s crashing into the long-time Siesta Village dining establishment.

The restaurant, noted winner of "Taste of Sarasota," brings the New England tradition of excellence to Sarasota with live lobsters harvested from Bar Harbor and Boothbay, Maine along with many New England style dishes.