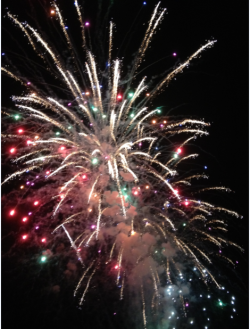 Kevin Cooper, Executive Director of the Siesta Key Chamber of Commerce, acknowledges that preparation work for this year’s fireworks 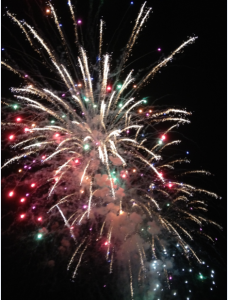 , is in full swing right now. "You'd be surprised that for a 25 to 30 minute fireworks display, we begin active work and planning three to four months in advance," Cooper commented.  “There are many permitting and payment issues and deadlines.”

“Hosting the fireworks on Siesta Key began in the early 1990s as a way to celebrate the troops coming home from the first Gulf War. The event became such a big hit, the Chamber decided to make it an annual tradition,” he said.

Expenses for the event go up every year. The $35,000 needed for the event is raised through business and residential donations, as well as a few fund raising events. The VIP party, hosted on the day of the fireworks, covers nearly 90% of the cost.

Cooper said, “Many of our sponsors contribute every year.  Businesses in the South village and here in the north village as well as condominium developments along Midnight Pass purchase VIP packages to help ensure the tradition continues.  It really is the collective effort of many sponsors that leads to the success of this event.”

“There is a misconception that the government funds fireworks or tax dollars are used.

Not a single tax dollar, or any government funding is used to help pay for this event.

The Chamber is happy to be at the helm and the logistics effort of Siesta Key’s fireworks,” Cooper said.

The new unique efforts of fundraising began after the 2010 fireworks fell well short of their fundraising goal. Since it is a break even event, the chamber began to brainstorm ways they could continue the tradition. Thus the VIP Party was born. They also have hosted a few 5K runs.

The creative thinking has continued, because the cost of the event continues to climb.

This year’s fundraising events include the second annual Poker Tournament hosted by the Sarasota Kennel Club in the" One Eyed Jack's" poker room.  Another fundraiser is the, "Start the Fireworks" raffle.  Individual tickets are sold, and the holder of the winning ticket receives a VIP Package and gets to go out on the beach and push the "TNT" plunger to start the 4th of July fireworks display. This is the third year of the "Start the Fireworks" raffle.  “Should more funding come in then is needed for a particular year’s display, those funds are set aside for future years should they be needed,” Cooper said.

The fireworks are launched directly from the beach, just north of the Siesta Key volleyball courts. Viewing is good from anywhere south and along Crescent Beach (south of Siesta Public Beach), out on the Gulf, or from the Intracoastal Waterway.  The best view, however, is always from a blanket or beach chair directly on the soft powdery sands of Siesta Key Beach.

Cooper asserts, “This patriotic event is specifically designed for the enjoyment of the community.”  An estimated 20,000 to 30,000 will enjoy the Siesta Key fireworks over beautiful beach and sparkling waters of the Gulf of Mexico, which starts about 9:15 p.m.