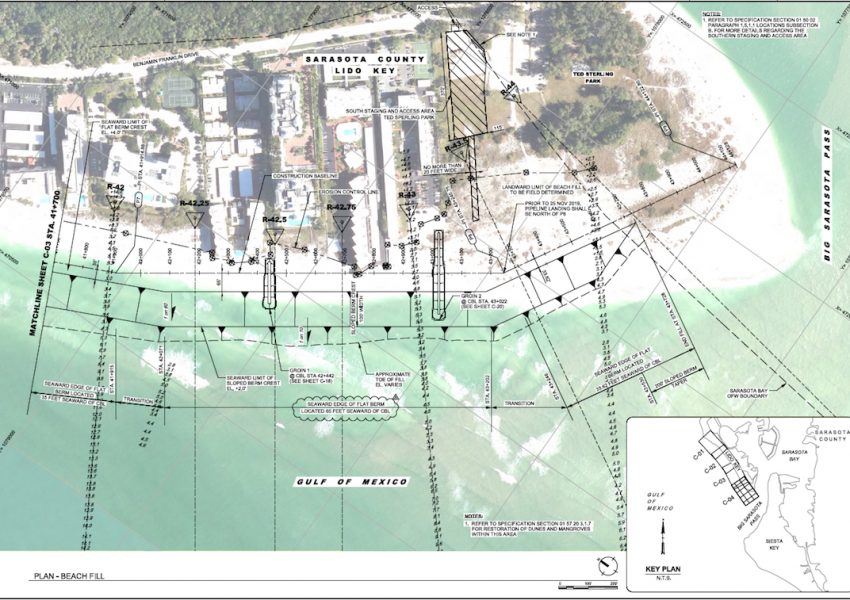 With the removal of sand underway in Big Sarasota Pass to renourish Lido Key Beach, leaders of the Siesta Key Association (SKA) have expressed concerns to both state and Sarasota County environmental officials about several issues, including a lack of transparency on the state’s part.

At the same time, leaders of the nonprofit Save Our Siesta Sand 2 (SOSS2) have been working on options since a federal judge refused their request for a Temporary Restraining Order (TRO) to prevent the dredging, which began on Saturday, July 18.

Siesta Key architect Mark Smith, who took over late last year as chair of SOSS2, told the SNL that the organization’s goal at this point is to wrap up its lawsuit against the U.S. Army Corps of Engineers (USACE), which it filed in the U.S. District Court in the Middle District of Florida in January 2019.

Although Chief Judge Steven Merryday denied the TRO motion, Smith pointed out, the case was still pending as of mid-August. If Merryday would issue a final ruling, Smith added, then SOSS2 leaders at least would have the option of filing an appeal with the U.S. 11th Circuit Court of Appeals, in Atlanta.

The goal, Smith pointed out of SOSS2’s latest efforts, is to try to prevent any subsequent dredging of Big Pass, as the permit the Florida Department of Environmental Protection (FDEP) issued to the USACE and its co-applicant, the City of Sarasota, in June 2018 is valid for 15 years.

The USACE has said that more sand will need to be placed on Lido approximately every five years.

On the morning of Aug. 6, SKA Director Robert Luckner emailed Gregory Garis, administrator of FDEP’s Beaches, Inlets, and Ports Program, to point out that it had been a week since the nonprofit had contacted Garis to request a link to the FDEP webpages where reports on turbidity would be posted for the Lido Key Hurricane and Storm Damage Reduction Project.

“These weekly reports are required per specific condition 32 [of the FDEP permit],” Luckner added. “SKA understands there have now been two violations that required project shutdown [of the dredge] in the past three weeks.”

Finally, on Aug. 6, Garis responded: “I have staff working to get them uploaded. I apologize for the delay.”

Then Garis added, “To clarify, turbidity exceedances are not permit violations. It is the [Department’s] understanding the contractor has followed permit requirements once notified of an exceedance.”

The contractor for the Lido initiative is Cottrell Contracting Corp. of Chesapeake, Va.

A section of the revised FDEP permit, issued on April 10, says, “If monitoring reveals turbidity levels at the compliance sites are greater [than the maximum limits], construction activities shall cease immediately [emphasis in the document] and not resume until corrective measures have been taken and turbidity has returned to acceptable levels.”

That section notes that Big Pass has been designated Outstanding Florida Waters, as shown on USACE documents related to the Lido project.

Further, the permit section says, “Any project-associated turbidity source other than dredging or fill placement for beach nourishment (e.g., scow or pipeline leakage) shall be monitored as close to the source as possible.” Again, it continues, if the turbidity level exceeds the maximum limits allowed in Outstanding Florida Waters, “the construction activities related to the exceedance shall cease immediately and not resume until corrective measures have been taken and turbidity has returned to acceptable levels [emphasis once more in the permit]. … The Permittee shall notify the Department’s [Joint Coastal Permits] Compliance Officer … of such an event within 24 hours of the time the Permittee first becomes aware of the discharge.”

SKA President Catherine Luckner pointed out that the permit makes it clear that monitoring reports must be submitted to the Compliance Officer. “Failure to [do so] in a timely manner constitutes grounds for revocation of the permit,” the permit states.

That article also notes that too much turbidity negatively affects life forms in the lower levels of a waterway, as they need light to survive.

On the afternoon of Aug. 6, Robert Luckner provided the SNL copies of two emails he finally had found, through an FDEP records search. Sent from USACE personnel, they noted that the first turbidity exceedance incident occurred just after 1 p.m. on July 20, “at the beach fill sampling site.” By 2:07 p.m. that day, the email said, the turbidity had subsided “and was within acceptable level.”

Another USACE email, sent on July 22 to the FDEP compliance officer, reported a second incident, on July 21. Again, the location was the beach fill site.

Through July 31, five exceedance incidents had been reported.

Yet another concern the SKA has raised is whether the USACE’s contractor has complied with the template for placement of sand on South Lido.

On July 20, Robert Luckner sent Garis of FDEP a series of aerial photos of the Lido shoreline, provided by SKA member Michael Holderness, who employed a drone to obtain the images.

“Could you please have someone look at this and determine whether the nourishment sand is outside the approved beach template plate 7 attached,” Robert Luckner wrote Garis.

Although the FDEP permit allows for up to 1.3 million cubic yards of sand to be removed from Big Pass, the USACE solicitation for the Lido project calls for only 710,000 cubic yards to be placed on the beach.

In a July 28 email to the Luckners, Garis wrote, “Based on available information, it appears work is being conducted in compliance with the permit and surveys will be conducted to ensure this.”

No further information was available from FDEP prior to publication of this issue of Siesta Sand.