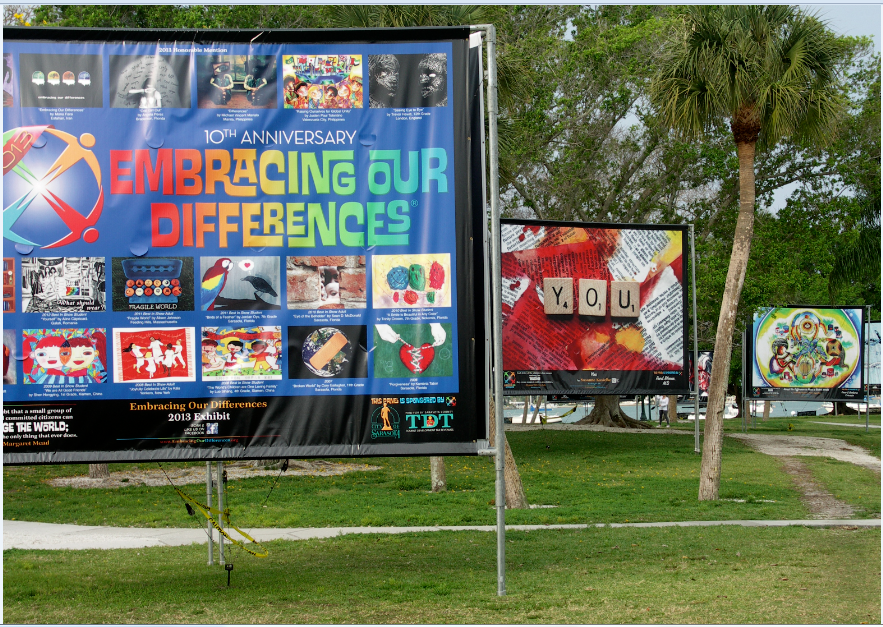 There is one big outdoor art exhibit on display at Sarasota’s Island Park, on the Bayfront off Ringling Boulevard Downtown.

Embracing Our Differences is celebrating its 10th anniversary. The exhibit features 39 billboard-size artworks and statements “created by 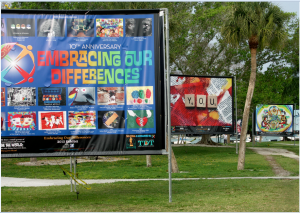 artists, writers, and students from around the world reflecting their interpretation of the message, ‘enriching lives through diversity,’” according to Michael Shelton, executive director of the group.

The event, is also being exhibited in Bradenton and North Port, received more than 4,000 pictures and words from people in 52 countries, including Kenya, Malaysia, Israel, Iran, the Philippines, Singapore, the United States, and the United Kingdom. Students from 128 elementary, junior, and high schools comprised 60 percent of the individuals submitting art and quotes.

Call Embracing Our Differences a big deal, both in size and scope.

Another big outdoor event/business/social scene has been proposed for Downtown.

The bar would be located in the parking lot at 1680 Fruitville Road. He paid $400,000 and reportedly is considering spending $350,000 for the HuBPuB’s creation.

Biter proposes having the outdoor establish front Second Street. It would have interior walls with flatscreen TVs and large heavily landscaped open spaces. He has been reported as saying he wants a place where people can sip an adult beverage and talk.

Sarasota has long had a lively discussion regarding outdoor dining establishments Downtown. The issue of live entertainment outside has surfaced, been buried, and resurfaced often in the past few decades.

Biter hopes to have the HuBPuB up and running by fall if the din on conversation on its proposal weighs in its favor.

May 14 is Election Day for Sarasota City. The city’s two at-large seats will be on the ballot, meaning that all electors may cast ballots for two of the three candidates.

On the ballot is incumbent Mayor Suzanne Atwell, Susan Chapman, and Richard Dorfman.

It is a run-off election for the trio. Run-off elections historically have spectacularly low voter turnouts, so this will definitely be an election where your vote will count.

It’s a little early to start worrying about hurricane season, but it’s a good time to begin getting in the habit of keeping track of what’s beyond our shores in the Caribbean and Atlantic.

If you see batteries on sale, pick up a few. Same with tuna, or Spam, or your favorite canned stuff.

Go all Scout and be prepared.