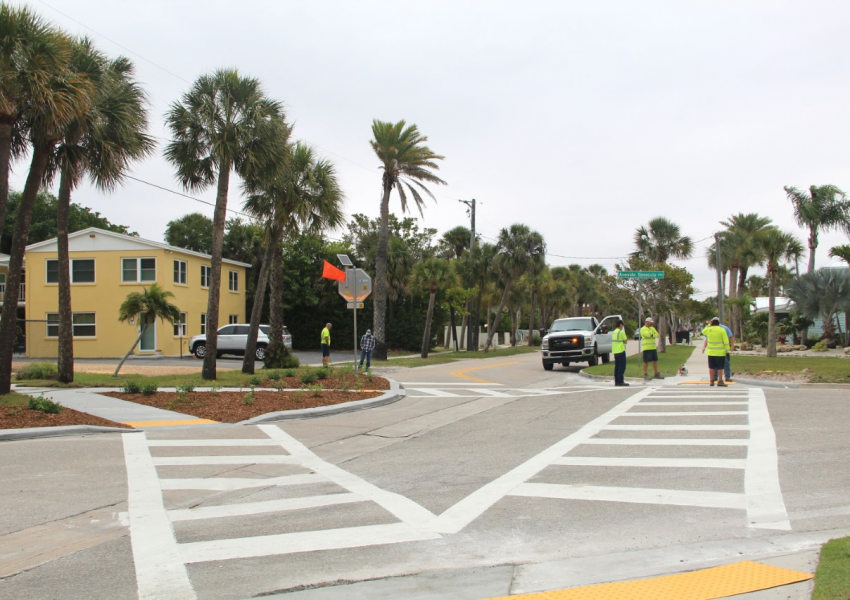 A Sarasota County Public Works Department crew was at work on Siesta Key in early April, creating a traffic structure called a “chicane” at the intersection of Avenida Messina and Avenida Veneccia.

“A chicane is a series of alternating curves or lane shifts that are located in a position to force a motorist to steer back and forth out of a straight travel path,” the Federal Highway Administration (FHA) explains. “The curvilinear path is intended to reduce the speed at which a motorist is comfortable traveling through the feature. The lower speed could in turn result in a traffic volume reduction,” the FHA adds.

Sarasota County staff has three primary goals for its Siesta Key initiative, Assistant County Engineer Larry Mau explained in a telephone interview with The SNL. The first, he said, is to prevent drag racing. The second is to discourage people from driving straight down Avenida Messina to Beach Access 2, where illegal parking has been a long-time focus of complaints.

The third goal, Mau continued, is safety improvements, as a three-way stop sign will be installed at the intersection of Avenida Messina and Avenida Veneccia.

“The county is very aware of the problem with driving abuse and parking abuse in the area,” Mau pointed out. The chicane is one option for mitigating those problems, he said. “We’re very hopeful that it improves the situation.”

He called the initiative a “fairly economical” means of dealing with the issues. During the interview, he added that he did not have the cost estimate available but would provide it at a later date.

One facet of the project was the installation of an area of new landscaping, Mau said. That is “just to kind of dress it up,” he noted.

Planning for the project began months ago, Mau continued. The Public Works Department staff originally planned to start construction in May or June, after the height of tourist season, he explained. “With the coronavirus closing the beach,” he said, “we felt it was a great time to get in here,” as traffic should not be a concern.

Sarasota County Administrator Jonathan Lewis announced on March 19 that the county would close all its public beaches and beach accesses as of 6 a.m. on March 21, in an effort to prevent large gatherings of people on the shoreline, which could lead to more spread of COVID-19.

Manatee County leaders already had decided to take the same step, Lewis pointed out, which was one consideration in the Sarasota County action. Additionally, Lewis noted that local government leaders had heard indications that groups of spring break students who had been forced away from closed Florida’s East Coast beaches would be headed to the west coast.

“We started [the project] yesterday,” Mau said on April 7. “It’ll be finished by the end of the week.”

The crew generally will comprise about four people, he added.

For the past couple of years, residents routinely have complained during meetings of the Siesta Key Association (SKA) that drag racing had become a problem on Avenida Messina, which runs west to Beach Access 2 from Ocean Boulevard in Siesta Village.

Increasingly over the past couple of years, residents and property owners have cited frustrations over illegal parking at Access 2, in spite of signage forbidding vehicles in that area. Private parcels seaward of North Beach Road are adjacent to that access, which also has caused confusion, residents and law enforcement officers have pointed out.

Siesta resident Mike Cosentino, who owns the property at 10 Beach Road, immediately adjacent to Access 2, has allowed personal vehicles on his land. However, owners of property south of him have declined to do so. Last year, county staff installed bollards to try to prevent public parking on the beach at Access 2 and on the private parcels.

In an April 5, 2019 memo, Col. Kurt Hoffman, chief deputy and general counsel of the Sarasota County Sheriff’s Office, wrote Major Paul Richard, commander of the Law Enforcement Division, noting that Hoffman had met the previous day with county personnel, including County Engineer Spencer Anderson and Assistant County Attorney David Pearce, “regarding the issues related to Avenida Messina and Beach Road on Siesta Key.”
After they reviewed “several surveys, property appraiser mapping, [county regulations], relevant signage and all pertinent enforcement history by our personnel,” Hoffman continued, Anderson agreed that “parking by Mr. Cosentino [in a specific area] between the bollards [at Access 2] and Mr. Cosentino’s eastern property boundary will be allowed by Sarasota County.”

Public perception of the chicane

During the telephone interview with the SNL, Assistant County Engineer Mau also said that the Public Works Department took the unusual initiative of having two county staff members talk to the property owners in the area of the chicane before the project began, given the “high sensitivity” of issues.

Normally, he said, with this type of road work, staff would not make such an effort.

Asked about the response from those staff contacted, Mau replied, “Most of it was positive. People see the need and the benefit.”

Additionally, he noted, as staff members worked on-site last week to lay out the plans, “We had a lot of positive comments from people walking by.”

One person who has objected to the chicane is property owner Michael Holderness, who has called, instead, for the installation of a gate at the intersection of Avenida Messina and Avenida Veneccia.

Referring to that request, Mau told the SNL, “That is not legally permissible.”

Public access to a paved and open public road must be maintained at all times, Mau stressed. The gate is not an option, he added, as long as Avenida Messina remains a public road. “We have to allow people on it.”