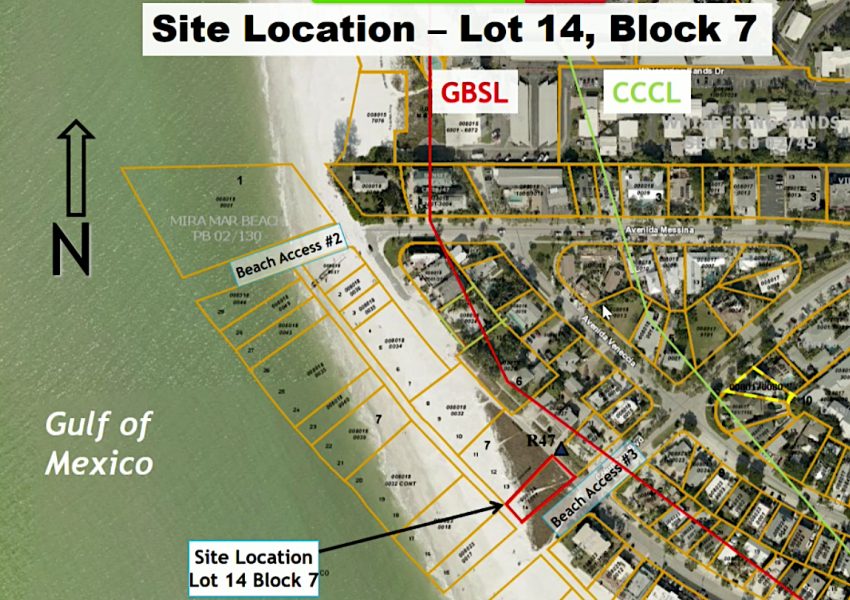 Citing the dynamic shoreline and the impact the proposal would have on the dune system, the Sarasota County Commission unanimously denied a request by Siesta Key property owner Michael Holderness to construct a two-story-over-parking, single-family home entirely seaward of North Beach Road.

The structure would have stood north of Beach Access 3.

Commissioner Nancy Detert was absent from the January 13th public hearing because of ill health.

As a county memo provided to the commissioners in advance of the session explained, “A study of aerial photos taken between 1948 and 2020 shows that a portion of the parcel [where the construction was proposed] was intermittently submerged throughout this time as a recently as 2013 … Though the proposed development is located approximately 190 feet landward of the MHWL [Mean High Water Line] according to information from a survey performed by Red Stake Surveyors on October 25, 2019,” the memo continued, “the low relative elevations present on Siesta Key, as well as the dynamic nature of erosion and accretion along the shoreline, put [the parcel] at increased risk of flooding as a result of tropical storms, hurricanes, and winter cold fronts.”

As county Environmental Specialist Staci Tippins noted during the board’s Jan. 13 regular meeting, the plans called for the structure to stand a maximum of 189.61 feet seaward of the Gulf Beach Setback Line (GBSL). County staff has explained that the GBSL is the figurative “line in the sand” to protect the coastal dune systems and habitat which, in turn, protect landward structures from storm surge and other flooding events.

The January 13th staff memo also pointed out that the site of the proposed home is part of a 0.4-mile stretch of beach that Florida Department of Environmental Protection (FDEP) designated as critically eroded in July 2020. The memo added that that “is the only area with this designation on the north end of Siesta Key.”

However, Weiqi Lin of Port and Coastal Consultants in Sarasota, who was representing Holderness, emphasized that the GBSL had not been updated since it was established in 1979. Further, he said, “The beach in this area has been dramatically increased over the past two decades.”

The MHWL had moved 105 feet more seaward between the time of the October 2019 survey, Lin said, and another survey conducted in September 2020.

Further, a building the County Commission approved in 1999, which stands at 104-106 Beach Road, would be 5 feet further seaward than the Holderness house, Lin added.

Moreover, Michael Barfield, a paralegal with Denovo Law Services LLC in Sarasota, joined Lin in emphasizing the mitigation Holderness planned in response to the impact the construction would have on 3,043 square feet of dune habitat. The ration of the mitigation area to the existing dune habitat expanse, Lin said, would be 1.13 to 1.

In her report, Tippins of Environmental Permitting noted, “About 70% of the parcel is covered with dune habitat …”

After purchasing the property in 2016, Barfield told the commissioners, Holderness planted extensive dune vegetation on the site. The aerial photos Tippins presented to them, he added, showed “this dune covering coming back and the accretion of sand …”

Barfield also stressed that Holderness’ construction plans represented the “minimum use of the property,” in compliance with the county’s Coastal Setback Code. “There’s not portion of the property that … can be developed that is landward of the Gulf Beach Setback Line …”

Additionally, Barfield said, Holderness proposed creating a conservation area over the parcel he owns seaward of the construction site, so it never could be developed.

Along with the house, which would have a footprint of 2,519 square feet, Tippins noted, a pool would comprise 252 square feet, while a pool deck would encompass 212 square feet.

“It is the smallest footprint to make a developable, allowable use of the property,” Barfield said.

Finally, Barfield pointed out that no portion of the site was inundated by the tropical storms Tippins cited in showing the board members photos of flooding in the area of North Beach Road and Columbus Boulevard. Such flooding, Barfield noted, “happens all over the county … We’re talking about whether there’s permanent erosion,” he continued, and, in the case of Holderness’ property, the shoreline has stabilized.

Nonetheless, in making the motion to deny the Coastal Setback Variance, Commissioner Ron Cutsinger said, “I think this is clearly in an area of dynamic erosion …”
Commissioner Michael Moran, who seconded the motion, noted that Barfield had talked about the county staff analysis, included in the board packet, comparing the proposal to county criteria for the approval of Coastal Setback Variances. While Barfield had indicated that the packet tables showed the plans were in compliance with those criteria, Moran continued, “There’s lots of facts demonstrating consistency … right next to facts demonstrating inconsistency.” He viewed the proposal as being inconsistent with the relevant county policies and regulations, Moran added.

Commissioner Christian Ziegler noted that, in regard to CSV requests, “Normally, I give a lot of leeway to the applicant.” However, he said, in this case, he, like Cutsinger, had to focus on the nature of the shoreline. “You think you’ve got a good spot now,” Ziegler said, but that could change in years to come.