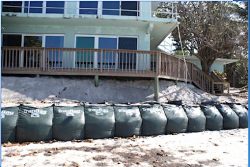 First, they made it clear to staff that they want the process to be easier for the public. Then the Sarasota County commissioners continued until April 10 a public hearing on an amendment to the county’s Coastal Setback Code regarding the handling of emergency measures property owners may take to protect homes in the face of severe erosion produced by storms.

The most common initiative, based on comments during a Jan. 30 hearing, has been the installation of sandbags.

Referring to residents who have pleaded with the board for help, Commissioner Alan Maio said, “These people are under stress. I feel like we’re adding some additional stress.”

Maio was talking about the county staff recommendation for two annual renewals of any Class I Emergency Variance that has been granted, which would make emergency measures valid for three years. After the three years ended, the person who received the variance could seek a new one, if necessary, the proposed amendment said.

The commissioners asked for the rewriting of the recommended language so the Coastal Setback Code would allow staff to grant three-year variances at the outset, with staff allowed to visit each site at least once a year to determine whether any problems have resulted from the emergency measure. The board members also asked for a single payment upfront for the three-year period. Staff had proposed charging people $50 for each additional one-year renewal of the variance.

The current fee for a one-year variance is $365.

Harry Artz, one of five Manasota Key residents who addressed the board during the Jan. 30 public hearing, urged the commissioners, “Make the process simple; extend [the variance period] as long as the [sandbags] can live.”

Speaking on behalf of the Manasota Key Association, President Michael Clark told the board, “These large sandbags … have already proved to be very effective in protecting several homes from Hurricane Irma … Conditions can change fast on a barrier island.”

Yet, given the language of the current ordinance, Commissioner Charles Hines pointed out, residents are having to endure a process of putting in sandbags and then removing them and then asking to put them in again, while paying costs ranging up to tens of thousands of dollars for each permitting cycle. “That isn’t working. … We’ve got to compromise somewhere. We can’t let houses fall into the water.”

During the Jan. 30 public hearing, Rachel Herman, manager of the county’s Environmental Protection Division, explained that “acute erosion” occurred in some areas of the county during the 2016 and 2017 hurricane seasons. As a result, members of the public had requested changes to the county’s Coastal Setback Code to extend the duration of Class I Emergency Variances.

As she explained the facets of the recommended amendment, she pointed out that the proposed, streamlined three-year process would result in potential savings of $630 to someone seeking a variance.

The amendment to the Coastal Setback Code would be applicable to Siesta and Casey keys as well as Manasota Key, Herman told the board.

“I thought this commission, and I believe it was unanimous, said we did not want the one-year renewals at another expense, but a three-year renewal,” Commissioner Alan Maio responded. “Why are we moving in this direction?”

Herman replied that staff suggested the one-year renewals because “you’ve got shoreline changes in a dynamic coastal system …” Staff members feel they should undertake an evaluation each year to ensure sandbags that have been put in place are still appropriate,” she added, noting, “The public interest is of paramount concern,” as the sandbags could impede lateral pedestrian access on the beach, for example, or hinder movements of nesting sea turtles.

Further, Herman explained, sandbags “can have [the] effect of reflecting wave energy on adjacent properties, and they may have deleterious impacts to those neighbors.”

Staff also felt the annual inspections were advisable, Herman continued, because it would be easier to remove emergency measures after one year than after three years.

“I understand your rationale for making people come back every year and pay another fee,” Maio said but then asked, “There is no way to accommodate the requests that we are getting, as commissioners, for … permits to [be valid for] three years?”

Would it be possible for staff to rewrite the language of the proposed amendment to allow the revoking of the emergency measure after a shorter period if the sandbags or other action were causing a problem?, Maio continued.

Emails he has received from the public, he said, have indicated costs “approaching $20,000 just to get the process started and the first [staff] approval [of a Class I Emergency Variance].” The correspondence, he explained, has discussed the necessity of hiring structural engineers and having surveys completed, along with paying for sandbags.

Herman emphasized that, under the proposed amendment, people would be able to seek extensions of the initial one-year variance by sending an email to staff, and they also would be able to pay the renewal fee online. “We turn [requests] around in 24 hours,” she added. “It was our impression that that was not onerous,” she noted, and the amendment would allow staff to undertake those inspections to ensure protection of the public interest.

“I believe if you authorize an approval [of an emergency variance] for a period of time,” Herman replied, and something happens “to put a neighboring property at jeopardy,” it would be “very difficult” for the staff to make someone remove emergency measures after a year has passed.

“If a three-year permit is granted and circumstances change,” County Attorney Stephen DeMarsh said, and then staff “determines a termination necessary, that will be a more difficult legal position for the county to be in than if it’s a question of extension.” Still, he added, “it’s entirely up to the commission.”

“I probably think … you could wordsmith this,” Chair Nancy Detert replied.