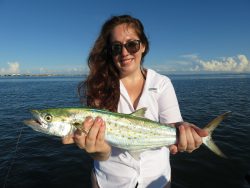 October is a fabulous month to be fishing on Siesta Key!  Shorter, cooler days result in water temperatures dropping into the low 70s, bait will be thick in the bays and out on the beach, and that will attract the gamefish.  Many species are going to be caught using a variety of angling tactics.  Redfish will still be schooled up on the flats in the north bay, snook will be in the bays, speckled trout, pompano, and Spanish mackerel will be feeding on the deep grass flats, and the beach should be outstanding for king and Spanish mackerel, false albacore, cobia, sharks, and even a stray tarpon.

Anglers with small boats can catch large fish this month.  The techniques and methods are really pretty simple.  Mornings that dawn with easterly winds will find the inshore Gulf of Mexico flat and calm.  Pods of baitfish will be seen on the surface, along with schools of feeding fish.  Threadfin herring caught on Sabiki rigs and free lined out behind the boat will catch just about everything.  Use a  4/0 hook on a 24” piece of 80 lb leader and drift the bait on the outer edges of the bait pods.  If cutoffs from kings or sharks become a problem, use a short piece of wire.  Shrimp and smaller baitfish work well on the Spanish mackerel and albies, use a 2/0 long shank hook on 40 ln leader.

There is no greater sport than sight fishing “breaking” fish.  Actively working gamefish will hit spoons, Rapala X-Raps, jigs, and flies.  Silver and white are good colors to start out with.  Often times, small baits will be needed, especially for the false albacore, they can be quite fussy.   Patient anglers will score more often than those driving aggressively into the fish.  Getting in the area and just sitting patiently while waiting for an opportunity will produce more fish than “running and gunning”.  If the fish are not showing well or if there is a chop on the surface, trolling Rapalas and Clark spoons on planers can be deadly.  The inshore artificial reefs are fish magnets and success is practically guaranteed for trollers in October.

Casting jigs while drifting over deep grass flats will produce a lot of fish in October.  Speckled trout, pompano, bluefish, mackerel, jacks, and ladyfish will hit a gold Cotee grub on a ¼ ounce jig head.  Rootbeer and olive are also productive colors.  Spoons, plugs, and flies will also work well, as will live or artificial shrimp under a noisy cork.  These same lures fished in Big Pass and New Pass will result in plenty of hook-ups as the fish migrate from the Gulf into Sarasota Bay.  Fish right on the bottom for pompano and just under the surface for blues and macks.

Redfish will still be schooled up, but their numbers will be diminishing.  The shallow flats in the north bay near Long Bar and Buttonwood Harbor are great spots to try.  The docks and oyster bars off of Siesta Key will also produce redfish, along with snook, snapper, flounder, and drum.  A live shrimp is a a great bait for fishing docks, scented soft plastics such as Trigger-X baits are very effective working bars and points.  A high, outgoing tide is best.
Snook will be back in the bays and feeding aggressively on the flats, bars, and mangrove shorelines.  Shallow diving plugs such as an (08) olive X-Rap are very effective and allow anglers to cover water quickly.  Creek mouths, points, bars, and docks that have current are likely ambush spots.  Bridges will produce a lot of snook for nocturnal anglers.