Sometimes rules need to be broken for the greater good. That is the view Bay Tree Club residents have taken in regard to a situation they believe literally involves life and death. And they are not going to give up until they have tried every means of getting the rules changed, or at least bent. 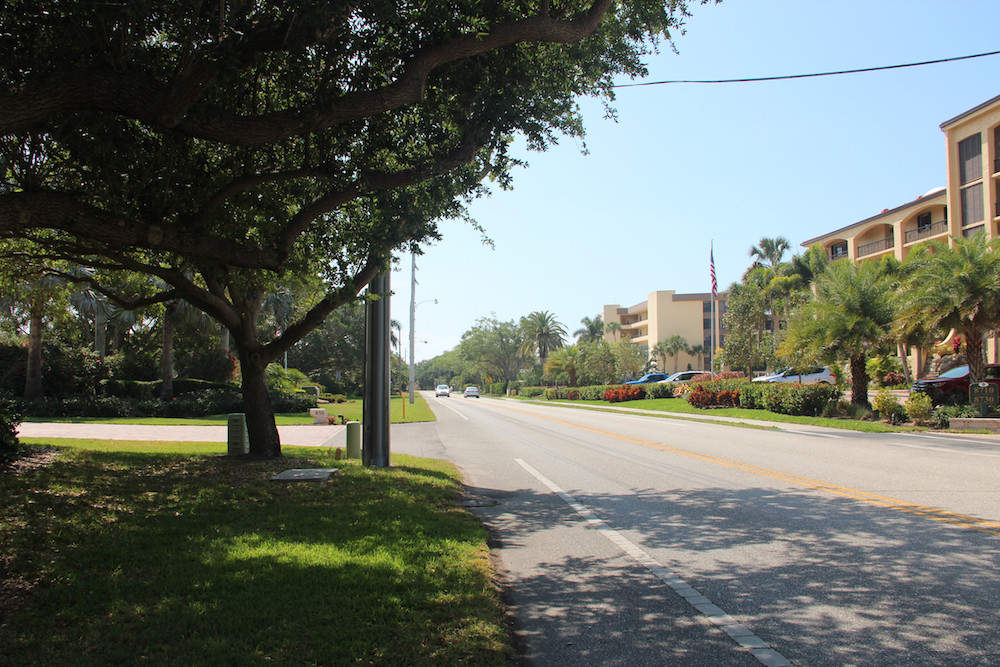 It all started in December 2015, Libby Sloan explained on April 9, as she and Margi Ryder met with a reporter. They live in the part of Bay Tree Club that stands next to Little Sarasota Bay, at 8625 S. Midnight Pass Road. The structure is just north of the Turtle Bay and Tortuga Club condominiums.

Yet, no crosswalk exists between the Bay Tree Club buildings on the bay side and those on the Gulf side. With a higher traffic volume came increasing stress for people who routinely crossed South Midnight Pass Road.

Additionally, at that time, Sarasota County Area Transit (SCAT) had a bus stop adjacent to the Bay Tree Club driveway on the east side of the road, Sloan pointed out. “People would cross the street to wait for the bus.”

Therefore, Sloan continued, “We decided … it would be a great idea to have a crosswalk right here.”

They did not want anything fancy, Sloan and Ryder emphasized. All they had in mind was paint on Midnight Pass Road to indicate that a formal crossing existed there.

The initial response, Sloan said, was that a crosswalk could not be provided in the requested location because sidewalks were not on both sides of Midnight Pass Road, just on the west side. “That seems to be the ‘Golden Rule,’” Sloan added of the sidewalk criterion.

The decision spurred Sloan to dive into research mode. Using Google Maps to take a close look at other stretches of Midnight Pass Road, she discovered that the crosswalk at the Sea Winds condominium complex, located at 6703 Midnight Pass Road, does not connect to a sidewalk on both sides. On the east side of the road, she pointed out, “They just have a piece of cement that was put in by the county.”

County staff members did not budge, Sloan said, when she pointed out that situation. They then told her too many driveways were in close proximity to the Bay Tree Club site, “and it was a risk [to put in a crosswalk].”

Bay Tree Club has many older residents and a number of handicapped residents, the women pointed out.

One man in his 50s who suffered a stroke takes about 10 minutes to get across the road. “He goes to the pool every day” on the Gulf side of the complex, Ryder explained. “The residents are very good about helping him,” she noted. 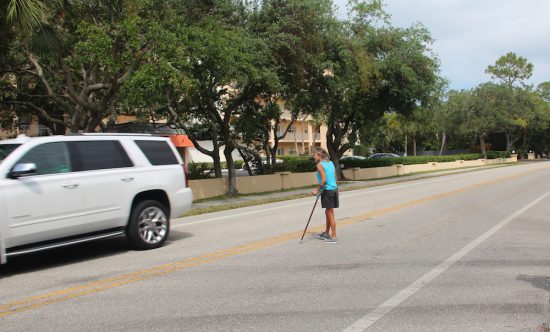 On April 9, Betsy Lynch, who has lived in Bay Tree Club almost two decades, volunteered to demonstrate how difficult it can be for someone to get across the road in the face of oncoming traffic. Lynch uses a type of cane, so she has to take her time.

Within moments after Lynch began her trek, an SUV approached from the north, and Lynch kept her eyes on it. As she was at the midpoint of the road, it flew past her without slowing.

“Are you serious?!” Ryder exclaimed. “He was far enough back that he could easily have seen you,” she called to Lynch.

Yet, another reason county staff gave them for not being able to install the crosswalk, Sloan said in an email, was that it “would give a false sense of security to the pedestrians. (This one is our favorite of all the ‘reasons’ we have been given.)”

In an April 13, 2017 email to Sloan, Robert Fakhri, manager of the county’s Traffic Engineering and Operations Division, summed up the situation from the county’s perspective: “[S]taff made site visits and concluded that the location you requested was not a feasible location. The conclusion was based on the following: There is no sidewalk on the west side of Midnight Pass Rd. for the sidewalk to connect to, there are three driveways in the vicinity of the crosswalk resulting in too many conflicting movements [and] the crosswalk location in close proximity to the bus stops and the curvature of the road will pose sight distance problems.”

“We just get the impression that down here, we don’t generate tourist revenue like the north end [of Siesta Key], “that we’re kind of second-class citizens” Sloan said.

Recently, the women contacted Gene Kusekoski, who was named president of the Siesta Key Association (SKA) in early March.

He came to the Bay Tree Club to get a firsthand look at the situation, they said.

As a result, Kusekoski brought up the issue during the April 5 SKA meeting. “You wouldn’t think it would be hard [to get a crosswalk painted on the road],” he said. Nonetheless, he continued, the residents are “facing all sorts of regulations.”

Kusekoski indicated he hopes the SKA will be able to help them.

“This is a safety issue,” Ryder stressed. A crosswalk, she added, is “not a nuisance.”

Siesta Key News Round Up