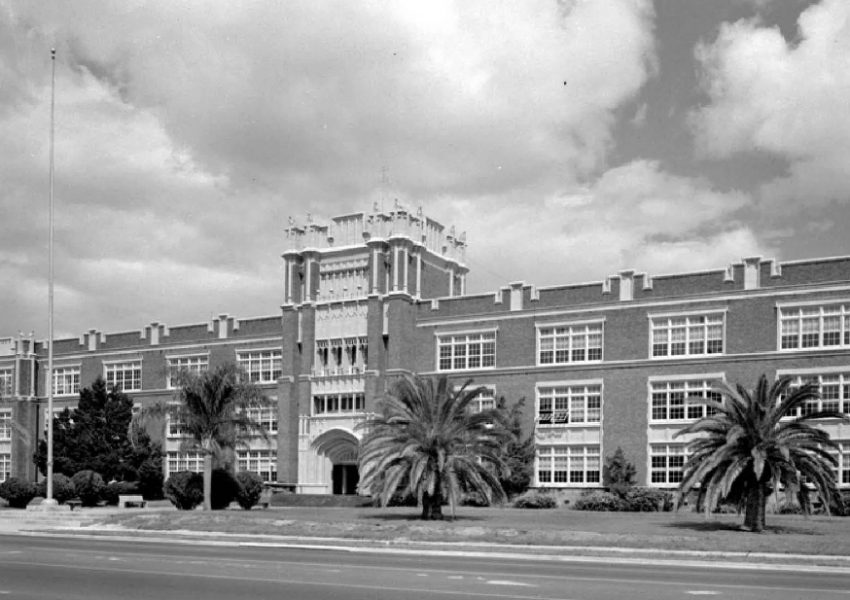 When was the last time you were in school?

That many years ago? Wow! Well, now there are many reasons to act like Marty McFly in Back to the Future and visit an old high school. Specifically, the old Sarasota High School building on Tamiami Trail just south of downtown. Architecturally speaking it is a gem, it is the high school that everyone should have in their memory. The school was built in 1926 and was actively used until 1996 when the students were shifted to a larger set of buildings: the main one designed by Paul Rudolph. The city, once the school was no longer being utilized, could have declared the property as “surplus” and sold it off to a developer who would have put in a strip mall. The city commission just could not see tearing down such an iconic building, so just let it sit there until some forward-thinking citizens could come along with a grand plan. A number of Sarasotians who loved contemporary art got together and pitched their idea of a museum to the city. Then a strong, retired New Yorker, Wendy Surkis, spearheaded the fundraising effort until enough money was available to convert the old school shell into a new and vibrant museum space. Along the way, The Ringling College of Art and Design got on board to turn the empty space into an operating entity – The Sarasota Art Museum, dedicated to contemporary art.

So, while the beautiful façade is one reason to look at the outside of the building, the reasons to enter are many. A current exhibit, appropriately, is on architecture – that of Carl Abbott. This exhibit shows not only a dozen examples of Mr. Abbott’s site-specific projects but also focuses on his own work space, the Bayou Studio, a lovely spot on Whittaker Bayou which he acquired and then renovated, opening it up to nature.

When a new building is constructed there is usually, tucked away in some corner, a small plaque inscribed with the name of the architect or design firm responsible for the look of the building. It’s sort of a mini-credit like those that flash by in a tiny blur after a film is shown. In buildings that were paid for by charitable contributions there is a large bronze list of donors in the lobby – pay to play. But what of those workers that actually made the building a living, breathing entity. They are here, in an exhibit commemorating those workers. Not just a list of names but a photo portrait of each by Sarasota’s portrait specialist, Barbara Banks, herself a graduate of Sarasota High School.

Melding? Interpolation? Subsummation? Transmogrification? How to describe the art of Janania Tschäpe? All of those words apply. Her current exhibit, Between the Sky and the Water, at the Sarasota Art Museum cross a range of media—painting, drawing, installation, sculpture, photography, video, and performance. Don’t just look at her painting as you pass by, stop and let yourself enter them. You can find exhibition hours and safety protocols at Sarasotaartmuseum.org.

No, these are not the suggested winning lottery numbers from a fortune cookie found in the back of the kitchen junk drawer, but they do tangentially relate to winning. On January 20th, the 18th annual outdoor exhibit of those giant Embracing Our Differences billboards will be back in Bayfront Park. This year, 15,912 entries of original quotes and illustrations came in from 128 different countries. Fifty billboards will be showing off the winners – the fifty best illustrations and fifty best quotes. But even the submissions that were not selected came from winners. The fact that those 15,812 entrants took the time to think about how diversity affects all of us in a positive way makes them better, more rounded students – which makes them all winners. Yes, most of these entries are from elementary and high school students from all over the world, all thinking those good thoughts that can make all lives better. And, because this competition is headquartered here in Sarasota, many of the entries are from the local area. In fact, Emily N. a 7th grader at Sarasota Middle School won the Best-in-Show student award.

Spoiler Alert: the following are some of the quotes that will be up on the billboards this year – Stop pointing a finger and start lending a hand; Social equality cannot be achieved if the folks making the decisions all look alike; and A country will realize its potential only when it recognizes its people.

If you’re tired of sitting home, day after day, a nice brisk (or leisurely) walk through this park on Sarasota Bay is just the thing. These billboards will put a spring in your step, a smile on your face, and a thought or two in your head. And, having the exhibition in the middle of Sarasota’s winter means less humidity and more lovely breezes. The exhibit runs from January 20 – April 1, with more information at embracingourdifferences.org

With all the holiday spirit, rushing here and there, as well as hither and yon, you might have forgotten the treat of watching the Sarasota Ballet’s performances in their Digital 3 presentation of some of the best ballets that they’ve done in the past. Regret not, as it has been postponed until January 1-5. Get more information at Sarasotaballet.org.

Yes, start the year off with a flute of champagne – and drink enough to put 2020 far behind. Then, at the end of the month enjoy listening to one of the world’s top contemporary flute players – a flute of a different color. Claire Chase will be presenting a world of new flute music in the New Music New College series. Ms. Chase was named a McArthur Fellow in 2012 and was awarded the Avery Fisher Prize in 2017 – so you know she’s got the chops to put on a great performance.

In 1936 Edgard Varèse composed Density 21.5, which made quite an impact in the world of flute players and flute devotees – a truly haunting melody. Ms. Chase is now working on a 23-year project commissioning a new body of flute compositions to be completed by 2036, the centenary of Varèse’s work. Some of these new pieces, by Suzanne Farrin, Du Yun, Mario Diaz de Leon, Felipe Lara, and others, will be on the program. The date and time (8PM on January 30th) for this concert seems firm, as does an artist conversation (free) on the 28th and a half-hour pre-concert conversation on the night of the performance – so check newmusicnewcollege.org for the specific venues as we get closer to the end of the month.