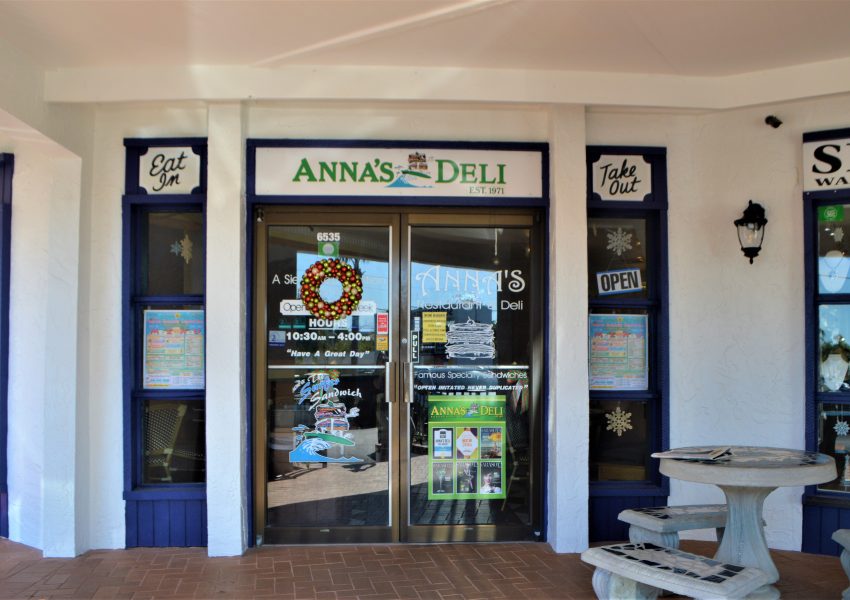 Almost anyone who has ever visited Siesta Key has either been to or has at least heard of Anna’s Deli.

A Siesta Key staple, Anna’s was originally started by Anna James in 1971 and has become the oldest eatery on Siesta Key. Since then hundreds of thousands of tourists, snowbirds and locals have passed through Anna’s Deli’s doors for one of their award-winning sandwiches. But a few months ago, a Food Network star was vacationing on Siesta Key, and happened to walk unrecognized through Anna’s South Siesta doors.

Ashley Paynter, daughter of Anna’s Deli owner Dave Havill, was working that day in their Anna’s University location, but soon learned that Katie Lee had posted a picture of the Anna’s famous Surfer Sandwich she had ordered on her personal Instagram page—which currently has almost 600,000 followers.

“A customer of mine came in, showed me the picture and asked, “Do you know who she is?” Paynter said. “Of course I did, but I thought that was just the end of it.”

It wasn’t. In addition to Lee’s co-hosting duties on the Food Network show “The Kitchen,” she is one of the chefs who regularly makes suggestions for another show on the channel, called “The Best Thing I Ever Ate.” Two weeks after she visited Anna’s Deli, the Food Network called Paynter to tell her that the restaurant and the Surfer Sandwich had been nominated for an appearance on that show.

“When they called, I thought it was a joke at first,” Paynter said. “They told me they would be here in July to film. When they came, we were open at the time and they were here all day..”

According to the Food Network website, “The Best Thing I Ever Ate” is the “ultimate guide to the country’s most amazing meals, eats and treats as told by the pros who spend their lives obsessing over food, from a barbecue sandwich worth driving over 1,500 miles for to cannoli so good that it completely healed a bad breakup.”

No doubt, Katie Lee felt the Surfer Sandwich fit into that prestigious category. Anna’s will be featured in “The Stacked Episode” of the show, which will be aired January 13, 2020.

This is not the first time both Paynter and Anna’s have been featured on a television show. In 2012, just after the family closed the Siesta Village store and opened one up in University Park, which Paynter’s brother Eric Havill manages, WFTS, the ABC affiliate in Tampa arrived to interview her. And then a week before the Food Network came in to film, John Roberts, from WFLA-TV in Tampa visited the deli to talk to Paynter about that.

But before the regional and national recognition, Anna’s Deli enjoyed its own sort of local fame, courtesy of not only their delicious sandwiches, but also their customer service. Paynter said that is a result of the dedicated longtime staff hired by her father and his wife Denise, who co-own Anna’s.

“Most of the customers who come here are on a first-name basis with our staff, and that says a lot about us,” she said. “We have some of the best people working for us, and they’re so great that our family can go away for the weekend and we know that they have everything taken care of.”

Paynter said that her father’s mission for Anna’s is: To provide 100 percent great sandwiches 100 percent of the time. No doubt, that’s the kind of approach to his business that led to a television star becoming so enamored with his signature sandwich that she wanted to feature it on a show.

Paynter said that though both the family and staff are excited about the January airing of “The Best Thing I Ever Ate,” the bottom line is that everyone takes pride in their work. It’s certainly not a bad thing to be recognized for it, though.

“It was really flattering that Katie Lee did this—I watch her show all the time,” she said. “But I tell my staff, you never know who you’re going to meet, so try to always make the day a little better, because you also don’t know what people are going through.”

Anna’s Deli is located at the Southbridge Mall, 6535 Midnight Pass Road, on South Siesta Key. It’s open every day of the week, except for Thanksgiving and Christmas, from 10:30 a.m. to 4 p.m. For more information, visit the website at www.annasdelis.com. Place a to-go order by calling 941-349-4888. For updates about the air date for the television show where Anna’s will be featured, keep an eye on the Facebook page: https://www.facebook.com/AnnasDeli941/.