You saw what in the bay? 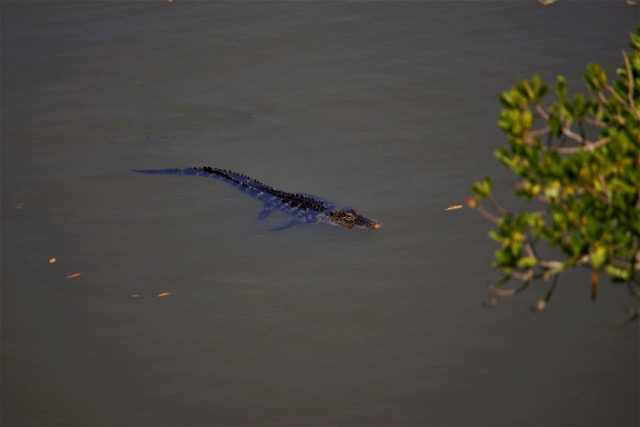 On July 27, a south Siesta resident sparked a lot of attention after he began distributing a photo he took in Little Sarasota Bay.

A resident of the Island Reef condominium complex on South Midnight Pass Road, Rick Wulterkens said he was watching a group of manatees when he spotted an alligator heading toward land.

The mangroves visible in the photo are on the Island Reef property, a neighbor, Libby Sloan stated. “Apparently gators can tolerate brackish water but this is very unusual!” Sloan wrote. “He/She looks to be about 6 feet long.”

Sloan added, “We are warning those who get in the Bay to clean their boats!”

According to the Florida Fish and Wildlife Conservation Commission (FWC), “Courtship [for alligators] begins in early April, and mating occurs in May or June.” FWC adds this caution: Females build a mound nest of soil, vegetation, or debris and deposit an average of 32 to 46 eggs in late June or early July. Incubation requires approximately 63-68 days, and hatching occurs from mid-August through early September.”

Of course, we are not sure whether the gator in Little Sarasota Bay might still have been looking for love. Regardless, residents are keeping a keen watch when they are near the water, just in case the critter is lingering in the area.