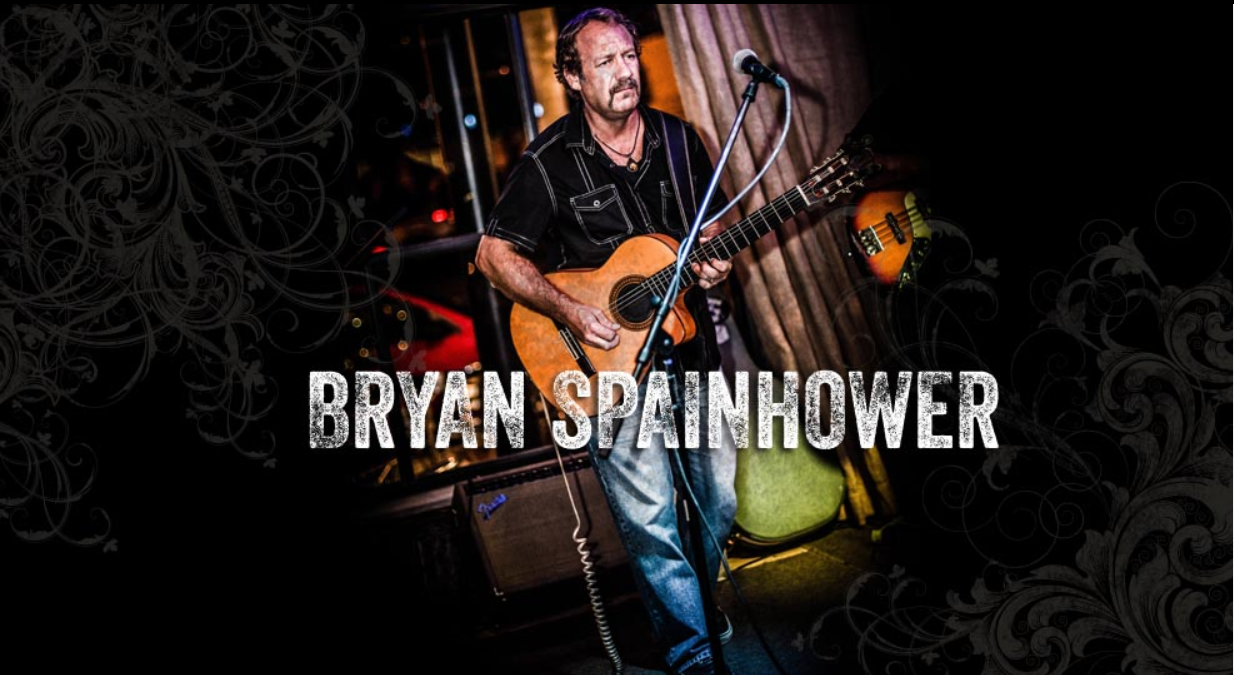 An interview with Bryan Spainhower
by Mike Sales

A few years ago, I’d acquired a Fender Stratocaster in a trade for sound gear and didn’t know what I had, so I took it for an examination and appraisal to the Sarasota Guitar Company (where else) where I met Bryan, who wasted no time, taking it apart and getting down to the truth of the matter…he told me I’d gotten a fair deal.

After the store closed its doors, I began to see Bryan playing his guitar around town and with his skill and unique style, it didn’t take long before I began to hear his name from the other musicians in town.

He took a break from his lunchtime gig at The Hub, to give an interview…

Bryan: I moved here from Austin Texas, about 3 years ago.

WPT: How long were you in Austin?

WPT: How long have you been playing guitar?

Bryan: About 30 years…since I was a teenager.

WPT: Did you play a lot in Austin?

WPT: I’ve heard that scene is pretty break-neck, as far as the pay being low and having to play several times a day to make a living; is that what you experienced?

WPT: Was that your primary job there?

Bryan: No, it was always a secondary job, but I was always in a band as a lead guitar player.

WPT: How did you transition to being a full-time musician?

Bryan: When I moved here, 3 years ago in May, I was managing the Sarasota Guitar Company and playing gigs, until they closed the business and I got enough gigs to play fulltime.

WPT: I’ve seen you at several gigs, like “The Hub”, playing solo; do you play with a band as well?

Bryan: Yes, I have a percussion player, his name is “Max Kelly” and we play several gigs a month. I also have a 3-piece band that is evolving.

WPT: So everything you play is instrumental?

WPT: What can people expect to hear, when they come to see you?

WPT: Who are your influences?

Bryan: When I was 17, I went to go see “Al Di Meola”, “John McLaughlin” and “Paco De Lucia”, with “Steve Morse”, of the “Dixie Dregs”, opening up solo/acoustic, and that kind of just changed everything for me from that moment, because I went from really getting into rock & roll to more jazz fusion and of course there was “Paco De Lucia”, who is one of the world’s greatest “Flamenco” players.

I listened to a lot of “Al Di Meola” who was a very huge influence, because he crossed over with jazz, fusion, rock, latin and all of that stuff. When he made the electric guitar scream, it was just amazing, but hearing those guys play acoustically was just incredible.

WPT: How did you develop your style?

Bryan: It always seemed unreachable for me to play that kind of stuff, but I formed a guitar trio band, in Austin, with a couple of Flamenco guitar players about a year before I moved here. When I did get here, having never played solo before, but wanting to, I just jumped in and started getting gigs, so I really developed what I’m doing now, here.

WPT: How often do you practice?

Bryan: Between learning new material, exploring new styles and honing technique; I practice about an hour per day. I like to listen to people like “Pat Metheny” and how they approach cover songs and make them their own…I try to do the same, so its unique.

WPT: What’s your favorite part about being a fulltime musician?

Bryan: Seeing people smile when I play and the exchange of energy with the audience.

WPT: Do you write songs?

Bryan: Yes, I play them at my gigs, as well.

WPT: Do you have any CDs?

Bryan: Yes, I have one CD out and am preparing to record another within 6 months.

WPT: What are your career goals?

Bryan: I’d like to continue doing this for the rest of my life. I don’t see myself ever retiring. I’d like to book more private events and work my way up to higher fees. I’d also love to eventually get national and perhaps international recognition, as most of us would, but I find I’m more motivated to do that now, than ever before, because the more I play, the closer I get to having that level of skill.

WPT: You’re one of the players that other players mention when talking about skill level and the sound you create; who do you like to go see when you’re not playing?

Bryan: Well first, let me say its good to hear that…I’m grateful to them for the kind words. As far as players, well you can’t deny, “Russell Donellon” as being one of the most creative and innovative guitar players I’ve ever seen…”Kevin Allen”, “John McLaughlin” and “Thorson Moore” of “Kettle of Fish” are amazing and (“Nic Kraster” &) “Lotus Fire” are a great world music band and good friends.

Bryan: Universal love…a goal of mine is to be a better person…and hugs; with every CD I sell, you get a free hug, but I always let them know it’s optional, so as to avoid coming off creepy.