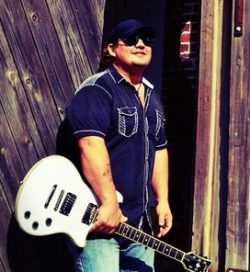 A few months ago, while setting up to play a party in one of the private rooms at the Polo Grill, I heard a band on the other side of the wall playing country music for a wedding in the banquet hall. The music sounded so good and the songs were so well chosen that it made setting up a breeze.

It turned out to be The Hatley Band performing during the cocktail hour in the foyer.

It also turns out that the songs sound even better coming from the cd I was given after this interview…but I’m getting ahead of myself.

Hatley: I started playing guitar when I was 17 and pursued singing after that…experimenting with different styles until I settled on country…it was a perfect fit for my voice.

WPT: When did you start playing live?

Hatley: I started playing out in my 20’s and played more in my 30’s, just on the weekends because I was working full time too.

WPT: What were some of genres you played early on?

Hatley: I tried popular music of the time…Pearl Jam…different genres of pop.

WPT: How did you make the transition into being a fulltime musician?

Hatley: I sold a pizzeria I owned and operated in Michigan…sold everything else I owned as well, packed what was left, moved to Key West and lived out of my van until I got enough gigs to support me.

Hatley: It was either there or Nashville…I’d never been to Key West, but figured it would be easier to get gigs there as a solo guitar/vocalist.

WPT: How long did it take to get your first gig in Key West?

Hatley: The very first day I was there; I went into a restaurant called Mangrove Mama’s and asked the owner about playing music. He asked what I played and said he didn’t like country music…I told him I wasn’t leaving until I got a gig and after a few hours he sat down to talk with me and we hit it off. He invited me to come back the following Sunday and play for free and by the end of it he gave me a gig playing Sundays and I played there every week for the next couple of years…he’s one of my best friends now.

WPT: How long did it take to fill up the schedule?

Hatley: It took 3 or 4 months of visiting places everyday…Key West is very competitive with lots of musicians who want to live that lifestyle, but the cost of living is high and its very transient, so the club owners want to see you around for awhile, but I hustled and hung in there until spots opened up and I got the gigs.

WPT: How did you wind up in the Siesta Key area?

Hatley: …by way of Nashville…I was playing at a Key West venue that was open to the street and a guy who owns a chain of restaurants in Florida came by, liked what he heard, and invested money for me to go to Nashville and record with Grammy Award winning producer; Mark Lambert.

After that, I moved back down here because I wanted to keep the band working. Key West is mostly singles and duos, so I looked at the map, checked out the East Coast and West Coast and found the West Coast to be a little more laid back with more work for a band.

Siesta Key is kind of the midway point. I play up in Tampa and I hit Key West every other month.

WPT: Do you write songs?

Hatley: Yes, there are 4 originals on my current cd.

WPT: What are your plans for your career?

At this level, there are plenty of gigs, but I’m always hustling to keep the band booked. The next level is when people start to call me about bookings and from there I’d like to play the larger gigs at festivals and open for major label acts, but ultimately I’d like to score a hit, either as a songwriter or as a recording artist with one of my songs.

WPT: These days, what makes up the Hatley Band?

Hatley: It’s most always a 4-piece band, but sometimes I have a duo or trio.

WPT: When do you play on Siesta Key?

Hatley: We play at the Siesta Key Oyster Bar 7-11pm, every other Sunday.

WPT: What can people expect when they come to hear you play?

Hatley: Fun and interaction with the crowd…it’s not about coming to see a band and just watching a show, its about the audience being a part of it…singing along, dancing, coming up on stage and even playing an instrument with us…hanging with the band and being a part of the show.

You can hear the Hatley Band, watch videos and check the schedule at hatleyband.com

Mike Sales is a local singer/songwriter log onto mikesalessings.com for more info.