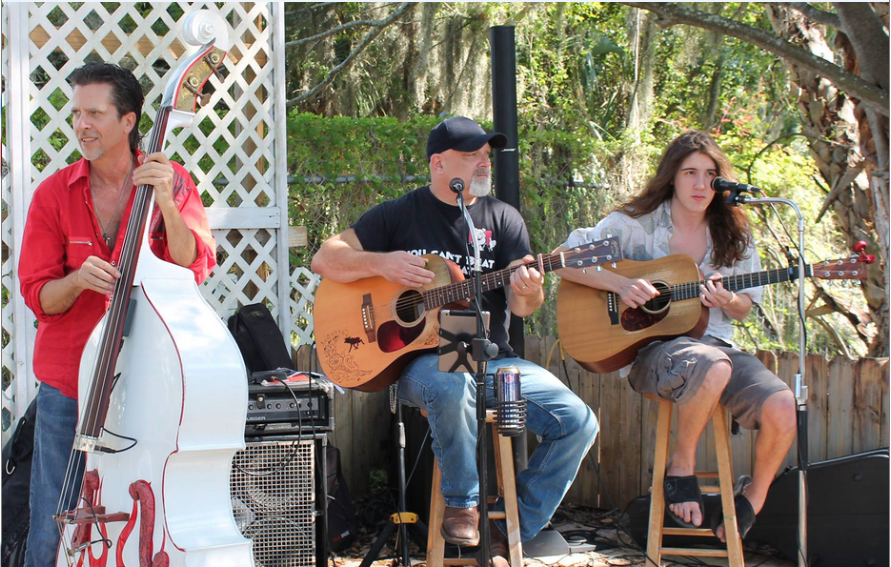 An interview with John Whiteleather

John Whiteleather was one of the first and most hospitable musicians I met when I first came to town. A true professional and polished talent, with a resume that reads like you’d expect from someone who was born to play music…it’s a way of life.

John: A little place outside of Pittsburg, Pennsylvania called Rochester PA in the heart of Beaver County.

John: When I was 12 years old, after watching his brother rehearse in their basement, my buddy urged me to get a bass…so after finding out what a bass was and asking my dad; he bought me a bass and paid for lessons.

WPT: When did you start playing out?

John: My bass teacher who was ready to leave is Big Band, recruited me to take his place.” He got me connected with them and put a bunch of charts in front of me, which I couldn’t read, but I learned the basic riffs and fell in with them just fine.

John: The big band led to a little rock band; one of the members would pick me up each week and drive out to another member’s house out in the boonies, where we’d play 70’s rock and it wasn’t long until I fell in with different bands, playing with a lot of older people…30-75 years old. We played country clubs, weddings, and bars.

One of my gigs was in the house band at a place called “The Serendipity Lounge” where the owners, a father & son, each did their own tribute show. The son did an Elvis show and then the father would come out and do a Tom Jones show, so I of course had to learn all of the songs for both and then the drummer, guitar player and I would finish the night out with 50’s songs.

I also played Coen's Happy Days Lounge where the bandleader was an old guy with long black hair and a mustache who used to work on the railroad with my father. He’d sit on his chair and swear as he shouted out the chords; “play a (#$@&%) G!…play D (#$@&%)!!…That’s how I learned to play 50’s rock & roll (laughs).

WPT: So you basically started making money as a musician right from the start?

John: Yes, we were doing gigs for $40 per night and that was back in 1973-74. My dad kind of groomed me into doing this by taking me to see Jazz bands, big bands and rock bands. He took me to New York City to see Greenwich Village and allowed me to grow my hair long, during a time when all of the other kids had crew cuts. I got picked on for that, but I wanted to be a hippie and even though he came from a different generation my dad stood behind me, and that continued into music. Both of my parents supported me and drove me to lessons, rehearsals and gigs at weddings, restaurants and bars.

WPT: So you were playing places you weren’t even old enough to get into?

John: Yes, and it was a tremendous opportunity to play with really good and seasoned older professional musicians at such an early age, which I did all the way through high school.

WPT: What did you do after High School?

John: I moved to Los Angeles at the age of 17, to study the bass guitar at the Musician’s Institute of Technology, which was renowned for drawing some of the best studio musicians in the world to teach. While there, I studied Jazz and learned a lot more about music in general and picked up the guitar, which led me to what they used to label as, “oldies, old country, roots music or even blues, but is now its own genre called Americana music and what I still play today.

John: Back then, all of the great blues musicians were still alive, so I could go out to clubs where people like Albert King, Albert Collins and a host of other greats who might be traveling through Los Angeles, would just show up and sit in. It was very inspiring. I played in a few rock bands for several years until I bought a stand-up bass and got into Rockabilly. I played in Europe a few times and then put my own band together and moved to Sweden where I recorded about 6 cds with small record labels.

WPT: What kind of success did you have with that?

John: The labels had good distribution and the labels in different countries swapped their artists so that opened up opportunities to tour as far as Germany, Holland, Switzerland, France, Sweden, and Norway.

WPT: How did they swap artists?

John: This was before the internet. All of the independent labels would create mail-order catalogues of their artist rosters and send them to customers. The labels from different countries gained access to each others customer base by shipping their catalogues to each other and making all of the regional music available internationally. We as artists benefitted from the expanded fan base and it was a bit easier for me as an American.

WPT: How was it being an American in countries where they didn’t speak English?

John: The Rockabilly fans in Europe we’re hardcore and many places had people who spoke English, but it really didn’t matter.

WPT: How long did you tour with the band?

John: Though members would come and go, I managed to keep making records and tour for about 15 years until I got burned out on sitting in a Chevy van all of the time and went solo. I got a summer gig on a peel & eat shrimp cruise for the owners who are like family. I played for them until they sold the boat. I still go back every summer but I’m based out of here now.

WPT: How did you wind up playing on Siesta Key?

John: I’d vacationed here from Sweden and loved the beautiful weather. When I came back to the States, I moved here then shortly after, met Mary Beth, and we formed Swamp Donkie, with her on fiddle. We played in Bradenton and hung out on the Key. One day, while speaking with Gabe at SKOB he suggested we play at open mic night for then managers Jason and Amy NaDell, who’d be there. We did and the audience got into it, singing along…within a month we had a regular gig, which I still play today.

WPT: What can people expect to hear you play?

John: Zack is a young man with a very old soul and a mature voice. His specialty is Gordon Lightfoot and a lot of 60’s popular music, while my genre is more like Springsteen and Mellencamp and then we throw in some Eagles and Johnny Cash…basically what I call Americana Music. Gary Cliff, formerly of the Boneshakers, also plays with us.

WPT: Do you play originals at your shows?

John: Yes. I try to write simple catchy songs and people are getting familiar with them and singing along.

WPT: What’s your favorite part about being a professional musician?

John: I enjoy meeting people from all over the country, getting to know them and what they do. It makes me appreciate living here and having the opportunity to make their vacation that much more enjoyable.

WPT: When do you play at SKOB?

John: Every Friday 2-6pm and there’s a date scheduled for Dec 13th 7-11pm that will feature Steve Apostoli on percussion.

You can see and hear John on his YouTube channel: John Whiteleather TV