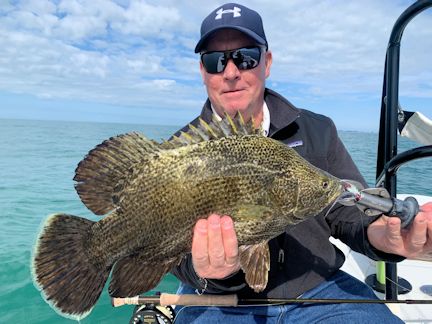 Anglers fishing with me, out of CB’s Saltwater Outfitters on Siesta Key, had good action with trout in Sarasota Bay and Gasparilla Sound on DOA Lures recently. My brother, Kirk Grassett, from Middletown, DE, fished several days with me during the past week. We fished Sarasota Bay one day and caught and released numerous trout to 3-lbs or more on CAL jigs with a variety of plastic tails. We also fished Gasparilla Sound and had good action there with quality trout on flies and CAL jigs with a variety of plastic tails We hunted tripletail another day and Kirk caught and released his personal best tripletail on a fly!

Shallow water fishing for reds and large trout is a good option now. With winter conditions we have very clear water, which usually requires long casts to avoid spooking fish. Depending on tide, sometimes afternoons will fish better than mornings in shallow water due to warmer water. Fishing deep grass flats of Sarasota Bay is also a good choice for action with a variety of species including trout, blues and Spanish mackerel. Fish the coastal gulf for tripletail when conditions are good. Our natural resources are under constant pressure from red tides fueled by industrial, agricultural and residential runoff, freezes, increasing fishing pressure and habitat loss and degradation, please limit your kill, don’t kill your limit!

Capt. Rick Grassett with a Gasparilla Sound trout caught and released on a CAL jig with a grub, recently.