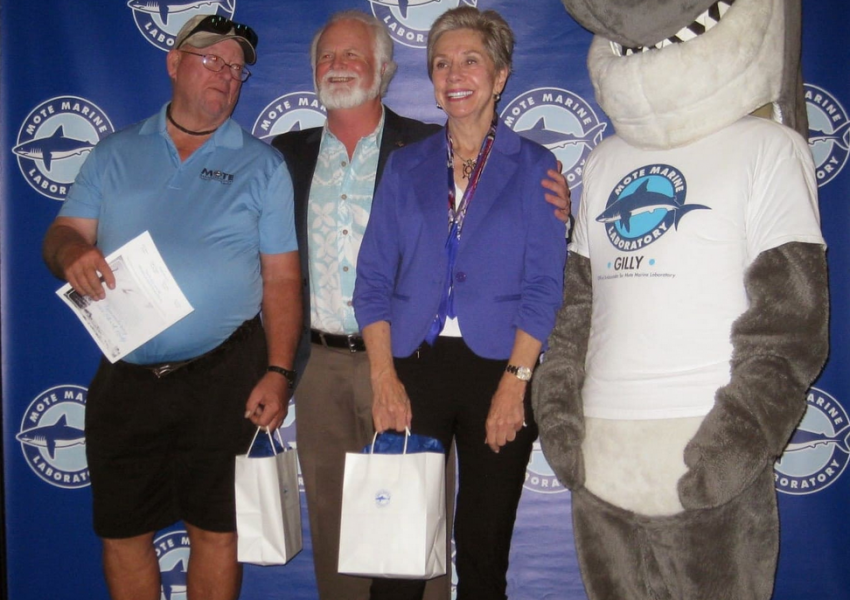 Anita Kincade has been named Volunteer Emeritus for Mote Marine Lab after 27 years volunteering for the Sea Turtle Program. She was recognized in 2005 for 15 years, in 2010 for 20 years, and in 2015 for 25 years of dedicated volunteer service. On each occasion, she was presented with a gorgeous crystal award, treasures she keeps in her home to remind her of remarkable experiences.

Originally from Western NY State, Anita and her late husband moved to the Landings in 1990 where she connected immediately with Mote, a much smaller organization at the time. The Sea Turtle mating season extends from May 1st to November 1st, and volunteers sign up to work at least one morning a week. Volunteers are thoroughly trained before they start and are retrained once a year ever after that.

After training, Anita would get up before dawn one morning a week and be at the beach at first light when one can see tracks and nests of the turtles and observe any other turtle activity.  Volunteers were tracking primarily loggerheads, but there were also greens and an occasional Kemp’s Ridley.

When female sea turtles are ready to lay eggs, they usually return to the same beach where they were born–the only time they ever return to land. These enormous creatures lumber ashore during the night, laying approximately 1 to 8 nests per season, each nest holding approximately 100 eggs. Some percentage of crawls are “false crawls”, where turtles wander back and forth, but nothing happens. Volunteer are trained to recognize these “false crawls” as they must also be reported.

Mote’s Sea Turtle program extends over 25-30 miles of beach, from Casperson Beach all the way to Longboat. Each volunteer is given a specific zone of beach to walk, and each zone is about ½ mile in length.

Anita served as a “non-permitted” volunteer, which means she was assigned to call Mote not later than 7:30 in the morning to report any activity on the beach. No beach will be raked until after calls are received and nests have been marked and staked. During her recorded call, Anita gave the exact location of the nest. To do this, she reported the address of nearby buildings taken from photographs shot from the beach. Following these 7:30 am phone reports, sites must be located, verified, and staked by permitted professionals from Mote.

In their search for sand that is soft enough to dig their pits, sea turtles sometimes go through the sea oats, under picnic tables or under benches. When suitable sand is found, they dig down about a foot before laying their eggs. Afterwards, they cover eggs up with their flippers, and pat the nest down to camouflage it.

At the edge of the water, volunteers look for signs of a crawl. Flipper marks vary with the turtle. If there is no sign of a tail drag, it is probably a loggerhead.  If a tail drag is sited, it probably was a green. It is interesting to learn that that the sex of the baby turtle emerging from the egg has been determined by temperature of the sand.  (Sands on Siesta are cooler than most beaches because of the high degree of crystal.)

Anita says, “For many years these sea turtles were gravely threatened. But for the last several years, their numbers are much better. Protection seems to be working!”

Once the first nests are laid, volunteers watch for hatchings, new crawls, new nests, and false crawls. They also check older nests. After a storm, a nest might be washed-over or even washed-out, meaning the nest is completely gone. 12 to 48 hours before each nest is to open, it drops about 8”. That telltale drop is reported to Mote.

According to Anita, “Each stake has a nest ID, which has a ton of information on it. The date, the address, the name of the permitted person who has verified the nest, the zone number, etc.  There is also a record of whether an animal has damaged the nest, and whether the nest has dropped. If it hasn’t hatched 4 days after a drop, a professional goes out to check the nest.”

Average incubation time is 50 days, although 41-82 days have been recorded. When hatching takes place, disorientation can happen. Babies go the wrong way, towards homes and sea oats instead of the water. Says Anita, “After hatching, you follow the little tracks. You start looking. If you find one that’s lost, you put the turtle in a bucket with wet sand, place a towel over it and take it to Mote or send for someone to retrieve it. The babies must make it on their own. If disorientated, they might be exhausted, or might have been attacked by fire ants. Mote will release them when they are well.”

Only about 1 in a thousand hatchlings make it. At 100 eggs per nest, that means only one out of every 10 nests survives.

Volunteers carry with them their cell phone, flags, a bucket for wayward babies, pen, notebook, address sheets with photographs of buildings, and brochures for inquisitive beach walkers.  Says Anita, “We wear our official volunteer t-shirts. People are amazingly interested and protective of nests and want to know this and that and more. We always spend time with them talking and explaining.  We carry information cards to give them. We also carry trash bags to pick up mylar balloons and other stuff along the way.”

Volunteers do not go out on the beach during lightning. If a storm is brewing, they are to wait before going out.  If it is only raining, they go out anyway. Should a volunteer be ill or out of town, they find their own replacement, drawing from a list of substitutes. Some regulars are available to substitute on alternate days.

Anita Kincade loves the organization! “I can’t say enough good things about Mote Marine Lab and director Michael Cosby. They are all very young in spirit. Everybody is excited. Mote is good to their volunteers, and their volunteers reflect that. There is a lot of caring for marine life and for the environment. Soon the City Island compound will become an international research facility and the aquarium will be reborn on the mainland.”

Mote’s volunteer corps Is over 1,000 strong and offers great opportunities! Applications may be found at:  www.mote.org/support/volunteer