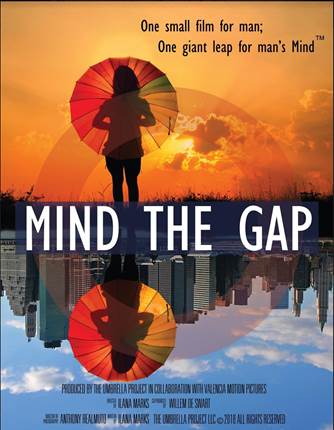 The journey of Ilana Marks is remarkable. Born in South Africa, she trained as a stage actress in London, and became a writer, an international lecturer, and a TV and radio host.  She has written, produced, and directed theatrical productions, and has lived in Sarasota for over ten years.

During this time, she has been hard at work creating a feature film.  Titled Mind the Gap, it is a psychological comedy exploring the nature of reality versus perception. The worldwide premiere screening will take place at 7:00 pm on March 21, 2019, at Sarasota’s Parkway 8 Theater, and the event promises to be exciting!

The concept for the film came to Ilana in a dream. Back in Boston, her early morning radio show often dealt with dreams, and she was especially aware of the creative power of the dream world.

Says Ilana: “Dreams are a source of inspiration for me.  I get incredible information that is almost other-worldly. A lot of inventors say they got their inventions from the dream state. Ancient Greeks had dream temples. This kind of information is available to all of us. Books, music, and art find their inspiration in dreams.”

The screenplay took her years to complete. She first wrote it as a stage play, because that was the field in which she had trained.  However, because the story appeared in a dream, Ilana had difficulty putting the concepts into words, so she set it aside for a while. Finally, after a few years, the way to express the film’s revelatory ending came to her after a week of silence at a silent retreat.

A synopsis of the tale goes like this: Adi, a 38-year-old off-Broadway actress, is on the verge of success when her playboy husband walks out on her. As a single mother with little income or support, her relationship with her young daughter becomes strained and her life begins to unravel.

While working in London, Adi has a mind-bending experience which sparks off her journey into the gap. She begins to peel away the façade of personal dramas, finding answers and reclaiming her life as she moves into a new reality. The audience follows her down the rabbit hole, encountering hilarious characters along the way. The tale is a mix of psychology, quantum physics, and spirituality. It is a story of profound self-transformation with a heavy splash of humor.

Ilana explains: “The title is an indication of the layered nature of the film. In the subways of London, there are signs reading MIND THE GAP, meaning to be aware of the space between train and platform.  Space brings clarity: the space between words, the pauses in music, the empty spaces in painting – all are essential to creative expression. These silences are necessary for things to make sense. On yet another level, the gap has meaning in the world of physics.”

In Boston Ilana interviewed dozens of authors, musicians, celebrities, politicians, and has moderated debates at a national level. Her previous talk shows on radio and television dealt with issues like domestic violence, alcoholism, politics, and the like.  Although she amassed a big following in the Boston area, in Sarasota she has concentrated only on writing and creating Mind The Gap.  She fearlessly jumped into the world of filmmaking, working with wonderful talented people along the way.

“Every step of this film has been stimulating. The film’s message is such a valuable gift to me, that it’s a gift I want to share with the world. We’re an indie film, but if dialogue is interesting and it’s a good story, you don’t need millions of dollars to tell a great story. It is simple but very very profound.”

Ilana not only wrote Mind The Gap, she also directed it and founded The Umbrella Project LLC which is producing the feature. It is a good-sized production for an Independent film.  They filmed in London, NYC, and Orlando. Says Ilana, “Pretty much everybody who worked on the film wanted to be part of the project. They felt inspired. It was amazing to find people who were as excited by it as I was.”

The film will be unveiled at its Sarasota premiere on Thursday, March 21 at 7 pm, at the Parkway 8 Cinema. Ilana Marks and several cast & crew will be present for the screening, which will be followed by a live Q & A. It will be an unforgettable evening!

Tickets and information can be found at: www.MindTheGapFilm.com and on Facebook & Instagram. Tickets will only be available online until the cinema sells out.