Up and Down the Trail 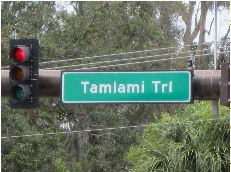 On April 17, a new public art piece was installed at the roundabout at Orange Avenue and Main Street in downtown Sarasota. The 20-foot tall sculpture is the first public roundabout sculpture in the city.

The sculpture, entitled “Embracing Our Differences,” fulfills a public art requirement for the recently completed Aloft hotel and One Palm condominium developments. The developer, One Palm LLC, partnered with Embracing Our Differences, a Sarasota-based nonprofit organization, to select an art design and artist. Accepted by the City Commission as a donation, the sculpture will be on public display 24/7 in the center of the roundabout, according to a press release from the city of Sarasota.

The city has already approved a second sculpture for the planned roundabout at U.S. 41 and Gulfstream.

“Embracing Our Differences” was created by artist S. Blessing Hancock. It is a colorful abstraction of an infinity loop intended to emphasize unity in the community while celebrating differences, diversity and inclusion.

A lot of folks are moving here. A U.S. Census Bureau study released at the end of March revealed the Sarasota metropolitan area is the 11th-fastest growing metro area in the country, with Sarasota and Manatee counties adding more than 20,000 people between mid-2014 and 2015.

From mid-2014 to mid-2015, the population in the two-county metropolitan area increased by 20,123, to an estimated 768,831. The percentage rate of growth — 2.7 percent — was the fourth-fastest in the state, and the 11th-fastest in the country, according to the data released.

The Sarasota area also earned a new distinction: travel magazine, Conde Nast Traveler has ranked Sarasota as number 14 on its list of “Best Food Cities” in the nation.

SRQ is one of only two cities that made the list in Florida. The second was Palm Beach, ranked number 15. The ranking is based on an annual survey from Traveler readers.

The city of Sarasota earned a $500,000 historic preservation state grant for planned improvements to the Municipal Auditorium, which was built in 1938 and is considered by many to be a community treasure.

The $500,000 grant was awarded by the Department of State, Division of Historical Resources for a Special Category Historical Preservation Grant, according to a city press release. The grant requires a $279,000 match by the city, so the total project cost will be $779,000. The grant will cover the following costs: restoration of 18 windows, new exterior metal doors, rehabilitation of the existing restrooms, reconstructing four flat roofs, repairing existing water damage and waterproofing the glass block.

“With over 1,720 Historic Places listed in the Florida National Register and 50 applications being submitted for this cycle of funding alone, this award is significant in that the Municipal Auditorium award represents the top one percent in Florida as a building of historical significance,” said Laura Wittenbauer, City of Sarasota Grants Coordinator.  “The funding will rehabilitate and restore this unique and celebrated gem of Sarasota.”

The required grant application was lengthy — at 21 pages.  An additional 100 pages of supporting documents were compiled and submitted. “Applying for a grant of this magnitude is a major undertaking,” said City Manager Tom Barwin.  “The City Commission supported the creation of a grants coordinator staff position just over a year ago, so the City could be competitive with these kinds of grant applications. That foresight is paying off. Securing a $500,000 grant is significant and we’re very pleased with this successful grant writing effort.”

Renovation to the Municipal Auditorium is expected to begin as soon as July 2016.

Built in 1938 as part of President Franklin D. Roosevelt’s Work Progress Administration, the Municipal Auditorium is listed on the U.S. National Register of Historic Places.

City of Sarasota staff continue to draft new regulations concerning tree protection. The effort is expected to culminate in the creation of new code provisions pertaining to tree protection.

Some city residents say there has been a rash of trees removed without a permit and proper protections were not in place before demolition or construction. On Feb. 18, city staff met with residents to discuss these issues and assured residents their concerns were being taken into consideration.

The 19th annual Sarasota Film Festival screened more than 180 films, including features, documentaries, shorts, and child friendly picks. The festival was held April 1 to 10 in the heart of downtown Sarasota.

In addition, a major focus of the festival this year was mental health issues, a follow-up to last year’s emphasis on homelessness.

From January to February, prices rose 1.2 percent in Sarasota-Manatee and 4.6 percent in Charlotte.

Rental rates for single-family homes have risen, as well. Single-family rental rates have outpaced wage growth in Sarasota County so far this year, according to a new study by real estate research firm RealtyTrac.

The chief operating officer of the nonprofit that runs Nathan Benderson Park has taken a job with Sarasota County.

Nicole Rissler, the chief operating officer for the Suncoast Aquatic Nature Center Associates and a former director of sports for Visit Sarasota County, has been hired by Sarasota County as deputy director of operations for Parks, Recreation and Natural Resources.

In her new role at the county, Rissler will overseeing several departments, including sports development and athletics; recreation and special events; natural area parks, preserves and trails; beaches and water access; and neighborhood parks and maintenance services. Rissler will report to Parks and Recreation and Natural Resources Director Carolyn Brown and is expected to start May 2.

“Nicole already has a great working relationship with the county and is very knowledgeable about how we operate from her experience with SANCA and Visit Sarasota County,” Sarasota County Administrator Tom Harmer said in a statement. “We look forward to her joining the county’s team and serving the community in this role.”

Rissler has a bachelor’s degree in sports and exercise science from Gettysburg College and earned her master’s of business administration from Lynn University. She lives in Sarasota with her husband, Bob, a member of the Sarasota County Fire Department, and has two daughters, Taylor and Skylar. She has also worked for the Sarasota Family YMCA and the American Red Cross.

AccuWeather is predicting that this year will be slightly busier than normal for tropical storms and hurricanes.

AccuWeather is predicting that there will be 14 named storms during 2016, two more than average.

But a large area of cold water in the North Atlantic Ocean could play a key role in the season's activity, the forecaster said. AccuWeather said that how ocean currents interact with colder sea-surface temperatures could affect storm formation during the six-month hurricane season that starts June 1.

A U.S. Coast Guard crew stationed in Cortez assisted in the rescue of four people after a 75-foot boat sank and the 32-foot boat it was towing started taking on water.

At 7:20 am. On Saturday, April 9, the Coast Guard received a mayday call from the smaller boat. A helicopter crew from the Clearwater station and a boat crew from the Cortez station found the vessel about 19 miles west of Egmont Key.

The air crew deployed a rescue swimmer with a dewatering pump. The crew from Cortez towed the smaller boat and took the people who had been aboard it to the marina in Bradenton Beach. No one was injured.