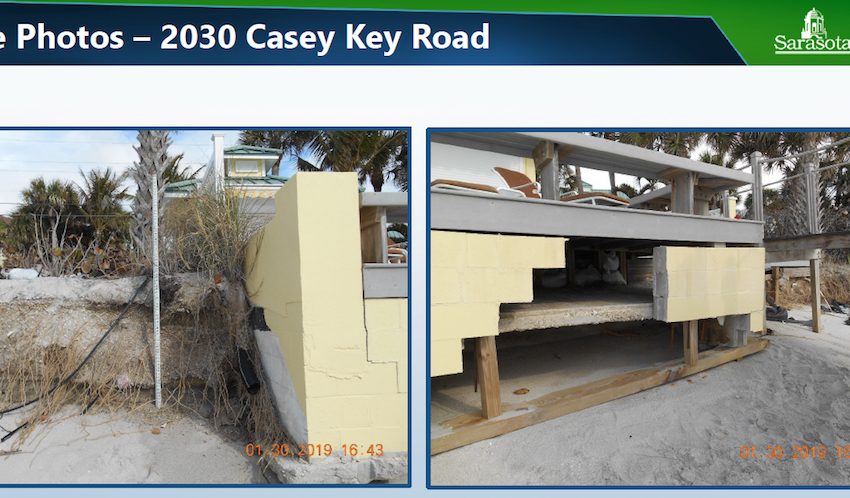 For the third time in less than a year, the Sarasota County Commission has agreed to issue a Coastal Setback Class II Emergency Variance to property owners on Casey Key dealing with severe erosion.

With no indications that anyone opposed this latest petition, the commission voted unanimously on March 12 to approve the request. The item was listed on the agenda as “Presentation Upon Request,” and no board member asked for a staff report. Chair Charles Hines did not have any cards, either, from people wanting to address the commission.

“We discussed this previously, regarding the problems on Casey Key,” Commissioner Nancy Detert said, “so I’m comfortable going forward.”

Commissioner Alan Maio made the motion to approve the petition for the variance, and Detert seconded it.

In this case, the owner of the property at 2030 Casey Key Road in Nokomis — Denise L. Cronin — sought the variance to install a total of 11 underpinnings to try to prevent the collapse of a structure with a cabana, a staff memo explained.

On June 12, 2018, the owners of the neighboring property to the north — 2100 Casey Key Road — also obtained a Class II Emergency Variance “to install underpinnings to support their undermined cabana structure,” a county staff memo noted.

The cabana at 2030 Casey Key Road dates to the 1970s, the March 12 staff memo said. It is entirely seaward of the road and the Gulf Beach Setback Line (GBSL), the memo added. At the time it was constructed, the memo explained, the county’s Coastal Setback Code had not been implemented.

The GBSL is what county environmental staff calls the figurative “line in the sand” to preserve coastal vegetation and dunes, which serve as a barrier to protect structures landward of them in the event of storms. The County Commission in recent years has been reluctant to approve any new residential structures seaward of the GBSL, except in uncommon circumstances. However, it has approved work on accessory structures west of the line, such as pools and cabanas.

In the case of 2030 Casey Key Road, the staff memo pointed out, the variance “will protect the Petitioner’s property value and allow the continued enjoyment of their cabana and deck amenities for an unknown period. However, maintaining such structures on a critically eroded beach will eventually lead to adverse impacts to sea turtle nesting habitat and limit the general public’s lateral pedestrian access along the beach.”

The memo also noted that the resolution the County Commission approved on March 12 included a stipulation requiring the property owner “to remove failed structures from the beach should a storm event cause significant damage.”

Dune restoration has been undertaken on the shoreline twice in recent years in the vicinity of the property, the memo said.

Cronin has owned the property since July 2016, Sarasota County Property Appraiser Office records show. She purchased it for $6 million, the records note.

A history of undermining events

“In March 2018,” the March 12 county staff memo said, “a strong cold front caused more than 10 [feet] of dune erosion in the 2000 block of Casey Key.” At 2030 Casey Key Road, the memo continued, “waves exposed the concrete block retaining wall and washed out sand from underneath the deck of the existing cabana structure.”

On March 26, 2018, county staff issued a Written Conditioned Exception to allow the owner to add 100 cubic yards of sand as fill, as a temporary measure to protect the shoreline from further erosion, the memo pointed out. Then, on Oct. 11, 2018, Hurricane Michael wreaked more damage on the concrete block retaining wall that is part of the cabana structure, the memo added.

A cold front in December 2018 undermined the structure even more, the memo said. As a result, on Feb. 4, county staff acted upon its authority to issue Cronin a Coastal Setback Class I Emergency Variance for the installation of sandbags along the shoreline, in an effort to protect the structure.

On Sept. 21, 2018, the staff memo said, Cronin applied for a Class II Emergency Variance “to install underpinnings to reinforce the concrete block retaining wall associated with the deck and cabana structure.” Then, on Feb. 13, she submitted revised plans, seeking to pursue the project with almost three times as many underpinnings, the memo continued.

The underpinnings consist of steel piles with a diameter of 3 inches, the memo explained. Their working load capacity, the memo noted, is 10 “kips.” The memo pointed out that a kip is a unit equal to 1,000 pounds of force. “The underpinnings will be installed at a minimum depth of 15 feet below the existing grade,” the memo added.

The block retaining wall is a maximum of 43.7 feet seaward of the Gulf Beach Setback Line (GBSL), the memo said. The proposed underpinnings will extend up to 1.5 feet further seaward of the existing foundation, to accommodate the pins and brackets, the memo pointed out. Therefore, the maximum distance seaward of the GBSL will be 45.2 feet.

Additionally, the memo said, the underpinnings will be about 51 feet landward of the Mean High Water Line (MHWL). As a result of the proximity to the MHWL, the memo continued, and “the recent erosion trends along this shoreline,” further undermining of the cabana structure is likely.

When county staff undertook a site inspection in January, the memo explained, staff “observed that the eroded bluff line north of the deck and cabana was approximately 4 ft. landward of the damaged concrete block retaining wall. Wave washup was observed reaching the seaward extent [of a dune walkover on the property, which was built with staff approval in 2009].”