The Spawning of Mote SEA 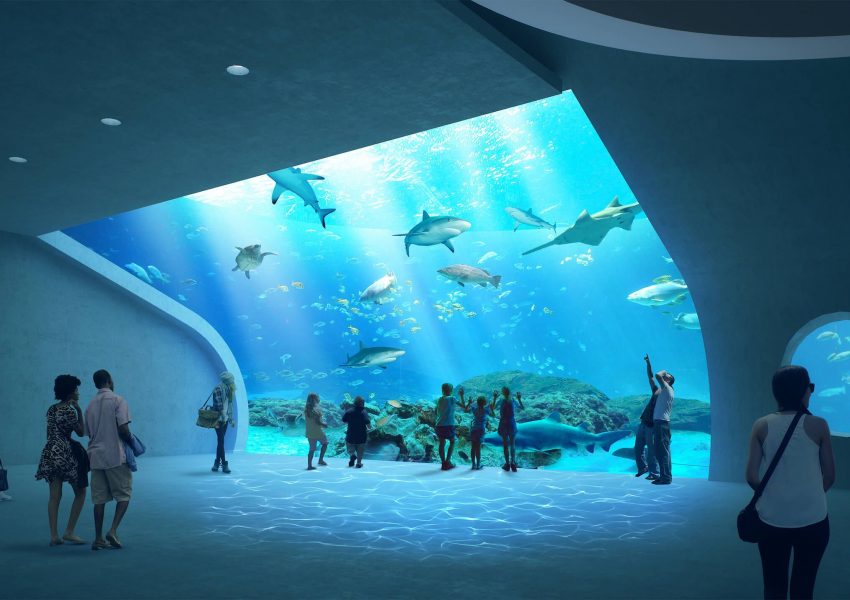 The reborn Mote Aquarium will be a traffic stopper. Literally. Due to its carefully considered perch at Sarasota County’s Nathan Benderson Park, just west of Interstate 75 near the Mall at University Town Center in Sarasota, an average of 43 million drivers will have the facility in clear view.

To realize their sea-inspired vision, Mote contracted the architectural firm of tvsdesign Architecture & Design, with offices in Tampa, Atlanta and Shanghai. “Drivers will easily spot the iconic building, whose diaphanous skin will form smooth ellipses rising into the sky like ripples on a calm sea,” states the moteoceansforall.org website. Termed “a nexus site” for Sarasota and Manatee counties and the southwest Florida region, three million residents will be able to drive there in less than 60 minutes. For the first year, Mote anticipates 700,000 visitors to its new home, twice the organization’s current annual attendance.

Known as Mote Science Education Aquarium (SEA), a facility dedicated to education and outreach, the striking edifice will house an 110,000-square-foot-hub of marine science on 12 sprawling acres. Inside the four-story space, exhibits containing more than one million gallons of water will feature an array of sharks, Atlantic and Pacific coral reef species, manatees, sea turtles, otters, and myriad other wildlife. Visitors will be treated to glimpses of the deep sea and other remote habitats, including Mote research sites from across the globe. For a special fee, intrepid adults will be able to gear up, dive in, and plunge into an enormous shark tank where they will have the opportunity to safely swim with these enormous fish. The tank will hold a half-million gallons of saltwater that replicates the sharks’ Gulf of Mexico habitat.

A state-of-the-art teaching facility, Mote SEA will include hands-on interactive STEM (science, technology, engineering, and math) teaching labs. Educational programming will be available, free-of-charge, to approximately 70,000 students from Sarasota and Manatee County schools. “Mote SEA will expand formal STEM education to each and every K-12 student in Sarasota and Manatee County Public Schools and transform our ability or provide informal science education and enhanced levels of ocean literacy to much larger and more diverse populations in our community,” said Mote Marine President and CEO, Dr. Michael P. Crosby.

Crosby also noted that “Mote SEA will generate a significant boost for our regional economy and further support innovative research for the sustainable use and conservation of our oceans.”

As of July 2020, according to MOTE, supporters had provided or pledged approximately $75 million of the total goal of $130 million for the Oceans for All capital campaign in support of Mote SEA. Sarasota County committed $20 million, and Manatee County committed $5 million.

“Groundbreaking for Mote SEA will occur by the end of the year,” Stephanie Kettle, Public Relations Manager, told the Siesta Sand. “We are continuing to wrap up the permitting and construction planning process to ensure site work begins shortly following the groundbreaking ceremony.” Additional information on the new facility can be found at Mote.org and MoteOceansforAll.org.

Caption #1 – Mote SEA will be on the grounds of Nathan Benderson Park, Sarasota.

Caption #2  – The new exhibits at Mote SEA will showcase a stunning array of marine life.