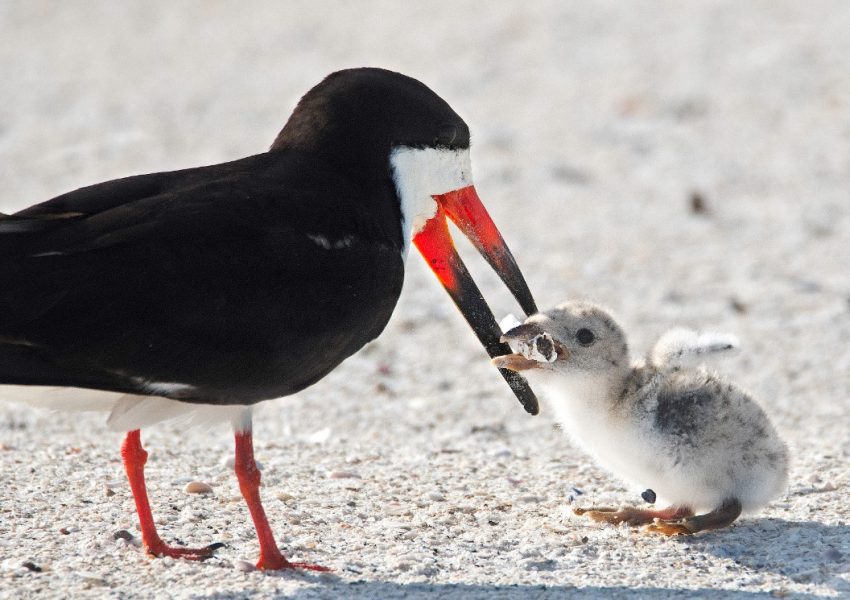 “Following the Covid 19 lockdown, so many more people brought their dogs to beach this year,” said the Audubon Society’s Kylie Wilson, speaking of early spring days when Siesta Key Beach re-opened. “We are not anti-dog,” she said noting that the rush of residents and visitors to the beach coincided with birds nesting season. For birds such as the Snowy Plover, Wilson said, “the only protected birds that nest on Siesta Key,” spring is a critical time. Audubon monitors the Snowy Plovers carefully, Wilson noted, said that the group has posted signs at Siesta Key Beach Access 10, near the small white birds nesting sites. “Unfortunately, there have been many human and dog tracks in the area,” she said.

“We want to educate people about the impact that dogs and humans can have on a nest,” she stated. When people visit a beach and let their dog off their leashes to roam free, she explained, man’s best friend can unknowingly do great damage. When humans or dogs approach the Snowy Plover nests, said Wilson, the birds “see them as predators and they flee, leaving the nest.” Unwatched, crows often fly in and snatch the eggs. Although the birds have nested on Siesta Key Beach for more than 10 years, Wilson said that “during the last three years, no eggs have hatched.” Until a few years ago, Black Skimmers and Least Terns could also be found at Siesta Key Beach, but now they are on Lido Beach. Our message, she said, is that “it’s important that we all do our part to safeguard our Siesta Key Beach.”

The Siesta Key Association’s (SKA) president Catherine Luckner agrees that communicating the message that everyone who visits the beach has a role to play in preservation is key. “We have increased our efforts in recent weeks,” Luckner said. “Dogs are not permitted on the beach. It’s a health safety issue for humans,” she said. “Sandy soil poses a risk for dog waste pollution. We are in contact with the Sarasota County Sheriff’s office to develop a public education effort about the issue of dogs on the beach. If people are repeat offenders, officers will give out tickets.”

“Siesta Key Beach is a unique environment for people and for animals and we need to protect this place,” said the Siesta Key Association president.

Encouraging Siesta Key residents, visitors and neighbors to become better advocates for the welfare of Siesta Key Beach is a message that the SKA, Audubon, and Professor Dr. Stephen Leatherman, Director of the Laboratory for Coastal Research at Florida International University, all agree upon. “We go to the beach to enjoy nature and the beautiful sand. How do we dare mess that up and why?” said the man known as Dr. Beach.

The need for greater public awareness is a common issue raised by advocates. When people bring their dog to the beach, experts say, they don’t do it to harm the beach. The same, Leatherman says comes when people smoke on the beach.

Cigarette smoking on the beach, Dr. Beach believes, is another often overlooked cause of damage to wildlife and humans as well. Young children, birds, fish, turtles and even dogs who are on a beach, he reports, may ingest discarded cigarette butts that contain high levels of toxins. To illustrate the danger, Audubon.com featured a photo of a protected Black Skimmer bird on a Florida beach unwittingly feeding a cigarette butt to her baby chick. “The chemical-laden butts are made of a plastic called cellulose acetate and consistently rank number one in trash removed during environmental cleanups,” Audubon reported.

Supporting efforts to stop smoking on the beach is another issue that advocacy groups say is vital to the future of all of Siesta Key.

In January 2020, Sarasota State Senator Joe Gruters proposed a state-wide bill that would have given Florida counties the ability to ban smoking at parks and public beaches, had it passed. The bill did not clear the Senate’s Innovation, Industry and Technology Committee, and it was not enacted.

Gruters, Chair of the Republican Party in Florida, has been a longtime proponent of smoking on public beaches. His current Senate term ends on November 3, 2020, and he is running for re-election. A member of Gruter’s staff told the Siesta Sand that should he win re-election in November, he is expected to re-introduce anti-beach smoking legislation when the Florida State Senate returns to session in March 2021.

“Beaches are our greatest natural playground and they need to be respected,” said Leatherman.