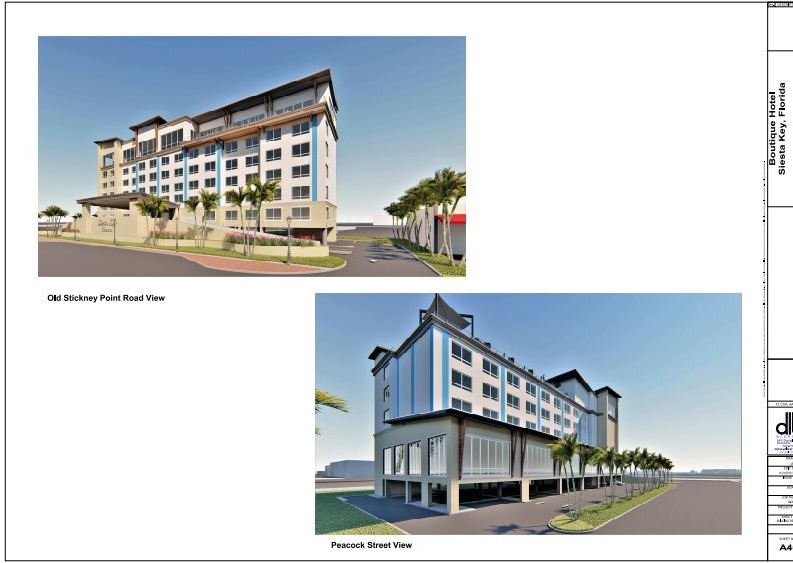 The November demolition of the Bank of America building located next to CB’s Saltwater Outfitters is the next step in creating the vision of Siesta Key’s resident, Dr. Gary Kompothecras of “1-800-Ask Gary,” in transforming what he calls the “South of the Bridge District.”

The demolition makes room for a proposed 35’ mixed use commercial and parking structure. The parking structure will have approximately 180 spaces within current height and setback limits, and 5000 sq. ft. of commercial space. A portion of the garage will be dedicated to serving the proposed hotel across the street on Old Stickney Point Road; the previous location of the old Fandango building and the current vacant Siesta Key Storage building, awaiting demolition.

“The recent purchase of the Bank of America building was to create a parking garage with a retail component on the ground floor.  This is to benefit the design of the hotel as well as make the whole area more attractive to visitors and accessible to the public. The area which I like to call ‘South of the Bridge District’ should be an upscale walkable area, with lots of restaurants, shops and parking for all the residents and patrons to enjoy,” said Kompothecras.

As for the parking structure site, Kompothecras went on to say, “The site is narrow which makes ingress and egress planning for a building of this type a challenge.  The concept currently shows ingress and egress off of Old Stickney Point Rd., but I prefer to have the egress be on Stickney Point Rd.  This creates some design challenges and is one of the issues that we have spoken with County Public Works transportation planners about.  As you know the county and state are currently negotiating to transfer ownership of Midnight Pass and Stickney Point to the county.  Until that transfer is complete, it will be difficult for the county to be the sole decision maker on this matter.”

About the proposed hotel

There is a fear about the hotel being built 2’ from the sidewalk on Old Stickney Point Road by many area residents.

In addressing the many fears, Kompothecras said, “We met with many local residents who voiced concerns about the design of the hotel and when the Bank of America building became available, I acquired it as I thought it would be good to alleviate most residents’ concerns.” Kompothecras went on to say, “I think we’ve tried to be good neighbors and design a fun place that will attract a good clientele both in season and off-season for the European travelers. A flag hotel will be named shortly that has a big European presence and will bring back people from Europe as they like to stay together and there are no other flagged hotels on Siesta Key.”

According to Kompothecras, the building height will fall below the maximum height of 85 feet established for CG/SKOD zoning, and will be indistinguishable from adjacent buildings.  The boutique hotel with less than 125 rooms is being designed with meeting rooms for community events and functions which is absent at present. The rooms will be programmed in a resort mix of Queen/ Queen and King rooms (generally three times more Queen/Queens than Kings), with a few suites available as part of the mix. The design aesthetics will reflect Sarasota’s contemporary modernistic architecture heritage.

“There will be no kitchens in the rooms.  Like almost all hotels built today, there will be a limited breakfast service with a workout facility and pool with cabana rentals,” said Kompothecras.  “There will be no restaurant in the hotel but have a small lobby bar.  There are plenty of local restaurants within walking distance and I don’t want to compete with them.  I want the entire South Bridge Village to benefit. All and all, I envision a wonderful, positive, economic and enjoyable area for both locals and visitors.”