Spring Break Begins with the Amish 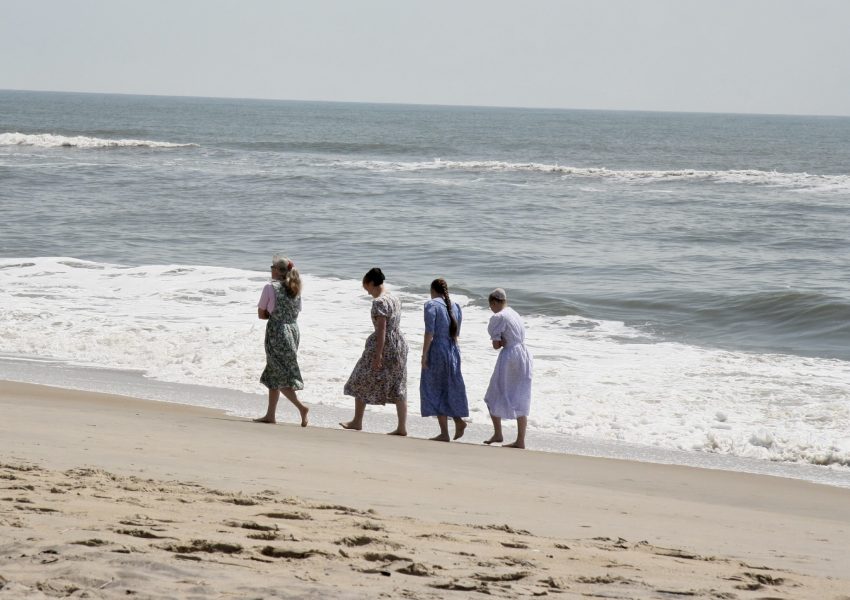 Incredible as it seems, spring break trips to Siesta Key did not begin with college students but started during the 1930s with excursions by devout groups of Anabaptists— both Amish and Mennonites.

During December to April, one of the most impressive sights on Siesta/Crescent Beach is the daily appearance of the Amish with their distinctive garb.  They begin arriving by bicycle or on the SCAT #33 bus; Sarasota County’s busiest during those four months. It picks them up in Pinecraft at the corner of Hines and Clarinda Streets, next to the unique Amish church. They speak German while riding and may stop off at the Village, but more likely go right to the beach for a day of fun in the sun— just like their ancestors.

The Mennonite people are Christians who trace their origin to 1525 when the Anabaptist (another baptism) concept originated. Wherever they live, the Mennonites form distinct ethno-religious groups but generally are not outwardly recognizable.

The Amish, in contrast, wear distinctive garments and always display a unique lifestyle— tracing their origin to Jakob Ammann who led a schism in 1693 within German-speaking Switzerland. The Amish way of life emphasizes orderly community activities with behaviors governed set of rules known as the Ordnung (German for order) that prohibits modern technologies. The Ordnung also includes expectations for lifestyle, recommending certain behaviors such as wearing proper clothes. The clothing and other identifiers are somewhat similar for the Amish irrespective of their residence.  All of the women wear single color dresses of cotton or other fabrics that are often pastel but never white.  The men use suspenders and if married maintain a plain beard.

The Ordnung applies both locally and while traveling. Yet some modern conveniences such as air conditioning are allowed, and less surveillance occurs at times such as on excursions to Siesta/Crescent Beach. As Amanda and Alva Yoder stated in the New York Times (15 April 2012), When you come down here, you can pitch religion a little bit and let loose… You’ll never find another place in the world that’s like this one. Longtime resident Katie Troyer adds: All of these groups can mingle down here in a way they wouldn’t at home.

When and why they came: discovery of Sarasota County

When brutal persecutions of Anabaptists in Europe became intolerable during the early 18th century, they migrated to Colonial America, especially Pennsylvania. Their next diaspora extended to other regions of North America wherever a combination of good farmland and tolerant communities could be found, and that combination brought them to Florida. The first Anabaptist Floridians came to Tampa in 1925, but the good agricultural land was expensive there, so they traveled to Venice where they were similarly disappointed. Next, thanks to the abundant Palmer properties, their odyssey ended when they found plenty of farmland at $600 per acre along Phillipi Creek. There, these enterprising, skilled farmers drained the marshland and soon grew celery, lettuce, radishes, and the highly prized Bibb lettuce.

Others visited for relaxation from the hard labor up north and for the fabulous fishing. During the 1930s and beyond, the entire community thrived despite the Great Depression and other economic busts.

Development of Pinecraft— the world’s only Anabaptist village

The Anabaptists settled in a new community of Sarasota County near the celery fields that was named Pinecraft. They took advantage of available land in the Sarasota National Tourist Camp with its 466 campsites providing about 40-by-40 feet of land for each family. The transition from camps to residential areas occurred gradually, with housing construction starting in the early 1940s. Eventually, a community developed with successful farms and other businesses such as produce markets and restaurants that thrive along Bahia Vista today.

Socializing around Pinecraft has always been rich.  Communication utilizes every means but modern technology.  There is an active word-of-mouth network, a type of non-electronic Craigslist at the Old Post Office, and most importantly the Anabaptists’ version of Facebook— The Budget newspaper that has been published weekly in Sugarcreek, Ohio since 1890. The news section of the newspaper is actually the minor component because the Facebook-like letters dominate with more than five-hundred letters weekly describing weather, events, recipes, obituaries, family, etc.

How they come: a long bus ride

By the 1960s, when the Florida tourist boom and Spring Breaks were becoming established, about 5,000 Anabaptists had already been visiting annually by train for a few decades.  Now there are closer to 10,000 annually.  They no longer can be accommodated in Pinecraft, so the “overflow” visitors stay on Siesta Key or in other communities close to the Gulf beaches. They come as early as November but more likely arrive from mid-December to April by busloads on Pioneer Trails or other bus lines. Pioneer Trails shuttles Amish from Ohio and Indiana, as well as fewer from Michigan, to the southbound start-point in Cincinnati where a caravan assembles for the eighteen hour ride to Sarasota. Up to six Pioneer Trails buses can arrive at Pinecraft’s famous Tourist Mennonite Church parking lot on Tuesdays, Thursdays, and Saturdays. The parking lot is always full of excitement, especially on Thursdays, when one of the buses brings The Budget.

Back to the beach

From the beginning, the Amish and Mennonite visitors loved Siesta/Crescent Beach.  It has always a great attraction for young Anabaptists to socialize with each other away from the scrutiny of their elders. Many a romance has been sparked on the white sand of Siesta/Crescent Beach. Later, it can become the perfect setting for a honeymoon. Just like everyone else, Amish and Mennonite beachcombers search the Gulf shores for sand dollars and shells.  Some also go swimming.

Unquestionably, the most distinctive and eye-catching feature of the Amish on Siesta/Crescent Beach is their distinctive clothing as they stroll along at any time during the day. Although Amish women do not wear the multi-colored clothes forbidden in every Ordnung, a cluster of Amish women enjoying themselves on the beach, each wearing a different pastel colored dress, is an attractive, multi-colored scene.

The Anabaptists’ social life is enriched all over Siesta Key and throughout Pinecraft. They enjoy themselves and their extended families wherever they go while leading peaceful, productive lives. The Amish and Mennonites have indeed been an important community asset in Sarasota County by being themselves.