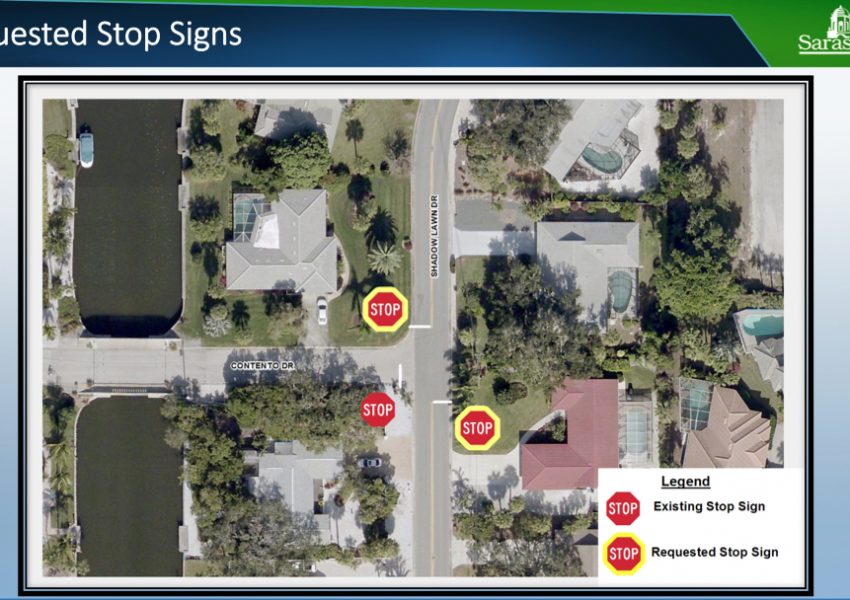 Different board, quite a different outcome.

Representing the Siesta Isles Association Board of Directors, he figuratively was shot down on each item. The lone petition on which the TAC offered some assistance involved Glebe Lane. Instead of lowering the speed limit from 30 mph to 20 mph, as requested, however, the TAC agreed to 25 mph, based on the staff recommendation.

During the Dec. 11 County Commission meeting — before Romanus ever even stepped to the podium — Commissioner Alan Maio began peppering Amjid Hussain, an engineer on staff of the county’s Traffic Engineering & Operations Division, with questions about staff’s objections to the Siesta Isles petitions.

“You and I are going to talk a lot this afternoon,” Maio told Hussain, “because I’ve had to listen to the thoughts of those residents on Siesta for five years.”

“The board has discretion to grant or deny these,” Elbrecht replied.

Approximately an hour and 2 minutes later, the County Commission unanimously had approved the speed limit change the Siesta Isles Association had requested on Glebe Lane; it had reduced the speed limit throughout Siesta Isles from 25 mph to 20 mph; and it had approved multi-way stop signs at two of the four intersections: Contento Drive at Shadow Law Drive; and Beach Way Drive at Cape Leyte Drive.

Maio made the motion for each one, and Commissioner Christian Ziegler seconded them.

County Media Relations Officer Drew Winchester told SNL in a Dec. 18 email that the speed limit signs would be installed Dec. 19, while the new stop signs possibly could be put up the following week.

Although the Siesta Isles Association had sought multi-way stop signs at two other intersections, Maio indicated wariness that he had full board support for all four requests. At one point, Commissioner Nancy Detert voiced her reservation about having “this many all in one neighborhood.” Nonetheless, she pointed out, “Nobody knows [a] neighborhood like the people who live in the neighborhood.”

Thus, Maio sought approval of the two the Siesta Isles Association had deemed its top priorities.

Prior to that vote, Ziegler said, “Let’s try it out and see how it works.” In the future, Ziegler continued, if the association board still feels the other two intersections need the signage, “We can always revisit it.”

Asked for comments on the Dec. 11 votes, Romanus responded in an email to SNL: “My overall feeling is how attentive and responsive the commissioners were. Commissioner Maio, as our representative, was very supportive. It seemed like the other commissioners took his lead. Keep in mind, as we navigated the process, County Staff and the Traffic Advisory Council recommended denial for every one of these requests. All five commissioners were engaged in discussion on our agenda items. I believe it was Commissioner Detert who commented that the residents are the experts since we know the issues best. Commission Chair [Charles] Hines asked for our prioritization of the stop sign requests and the BCC approved our top two. Amazing!”

Romanus added, “We’re hopeful that these changes contribute to the goal of improving pedestrian and bicyclist safety in our fine neighborhood. Our lack of sidewalks or bike lanes creates unique challenges. Time will tell!”

In his opening presentation to the commission — regarding the Glebe Lane petition — traffic engineer Hussain explained that Glebe Lane is only 600 feet long. Six single-family homes are on one side of the street, he continued; on the other, St. Michael the Archangel Church. The road is 22 feet wide, with 11-foot-wide travel lanes, he added. “There are not sidewalks or bike lanes on Glebe Lane.”

A traffic study county staff conducted showed that the speed for the 85th percentile of traffic — a standard used in such studies — is 27 mph, Hussain noted. The average speed is 23 mph.

Staff disagreed with the request to lower the speed to 20 mph, Hussain said. That would be “difficult to enforce,” he told the commissioners.

Maio added, “There’s a groundswell out there for these type of traffic reductions. … Do I break some sort of rulebook? Do I create a safety hazard?”

Hussain referenced the standards provided in the Manual on Uniform Traffic Control Devices (MUTCD), which staff uses as a guide for its recommendations.

During his first trip to the podium, Romanus explained the efforts the Siesta Isles Association’s Traffic Safety Committee put into exploring options for improved safety in the neighborhood. Residents held multiple meetings with county staff, he said, and the committee polled residents. The Sarasota County Sheriff’s Office assisted by conducting a traffic study in March 2018, he added. Because that was undertaken during the height of tourist season, Romanus said, its results varied considerably from those produced by the county study conducted out of season.

Additionally, noting Siesta Isles’ location on the Key, Romanus said the neighborhood has become a cut-through for drivers from Midnight Pass Road to Siesta Village and Siesta Public Beach.

“We could have come here and asked for a million bucks for a sidewalk from Midnight Pass Road to Siesta Village and the beach,” he continued. Instead, he told the board, “These are simple, low-cost requests that we are making on the agenda today.”