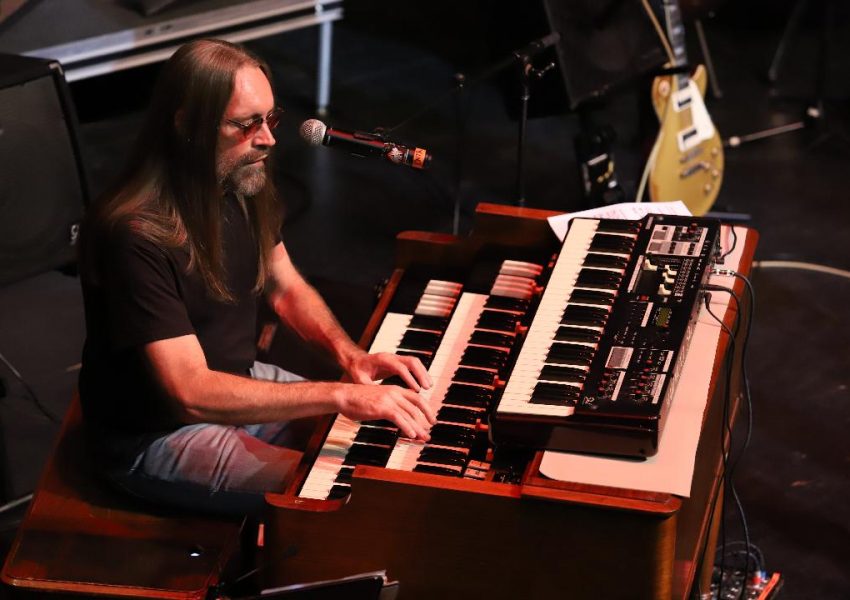 Mike Kach playing more than ever this fall

One look at Mike Kach might bring Gregg Allman to mind, and as soon as you hear Mike perform there’s no doubt: he is a longtime Allman Brothers admirer who not only does a great job of covering their music, but does it with such a sense of joy that even non-ABB fans get caught up in it.

Which is exactly what he strives to do with his band, The Mike Kach Group. Featuring the best of the best players, the regular configuration of the group is Mike on keyboards and vocals joined by Steve Camilleri on drums, Burt Engelsman on bass and Mark Serio on guitar. When players have conflicting dates you may occasionally see Frankie Lombardi or Pat McDonald behind the drums and R. Howson or “Howlin’ Bob” Fieberts taking guitar duties. No matter which configuration is assembled, it’s all good … really good … and you’ll have a great time.

“That’s really our job,” Mike reflects. “Not only to play music, but to distract you from all the worries and problems of the day and just let you feel good for a while.”

While Mike’s spent years as keyboardist and co-vocalist for Dickey Betts and Great Southern, he was long before that considered something of a fixture in the Southern Rock scene, he’s also an accomplished player of many other genres; happily, that keeps him in demand and he usually has several projects going simultaneously, which is fine with him. He loves being part of a music community that is like a large, extended, very talented family.

“It’s really a matter of survival,” he notes. “I love playing with a variety of people and we have a wealth of talent in this area, but you also need to make a living. Still, when the money is good or when it isn’t so good, that’s always what you’ll find us doing. It’s who we are.”

Mike might be considered something of an “old soul” when it comes to his affinity for music. He clearly remembers when music first became the big thing in his life: he was only about four years old when he heard Jerry Lee Lewis playing on TV.

“That’s when my lightbulb went on,” he laughs. “That was what I wanted to do from that moment on.”

Of course at that age he couldn’t have had a clue about music becoming his career, but he heard something there that he immediately bonded with on a very deep level and knew that music would be an important part of his life. And that wasn’t even his first “ah-ha” moment.

“There are old black-and-white photos of me playing my grandma’s accordion,” he laughs. “Before I could even walk, they’d set it down open on the floor, and I’d crawl over to it to try to play.”

After many years playing all over the country with different bands, one thing Mike has learned is that southwest Florida has the best of the best all clustered together in a relatively small area.

“We may be a little spoiled,” he admits. “When you’ve had such a great group of musicians all around town for so long, we may not even realize how lucky we are.”

But it is, he adds, nice to work with people that you yourself like to listen to.

He’ll be working with guitar player/vocalist Billy Seward on a couple of projects, performing and recording. Seward’s recording project is in the very early stages but will be, Mike says, an EP length of five or six songs. The recording will include longtime friends and fellow players like Richy Kicklighter, Burt Engelsman, Frankie Lombardi and more.

“Billy is a great vocalist, more of a ‘soul guy’,” Mike explains, “and he is just brilliant at it. When it comes to smooth vocals, he totally nails it.” (“It” includes covers of Al Green, Tyrone Davis, Jimmy Cliff, Freddie King and other “best of the best” soul guys.)

Also exciting is the Allman Brothers music celebration “A Brothers Revival.” The project was put together by David Goldflies and Johnny Neel (two former members of ABB). Mike has joined the group in touring various cities to share the 50th Anniversary of the Allman Brothers Band.

Closer to home, Mike’s happy to be back on Siesta Key in the heart of the Village, playing at Gilligan’s after too long. “I started playing there way back when it was still the old ‘Keyhole’ (the club’s previous incarnation),” Mike remembers. “It’s good to be back!”

Next Gilligan’s gig for Mike is with Billy Seward, Burt Engelsman and Frankie Lombardi, on Sunday, October 27; come on out to be “distracted and entertained” by some great music.