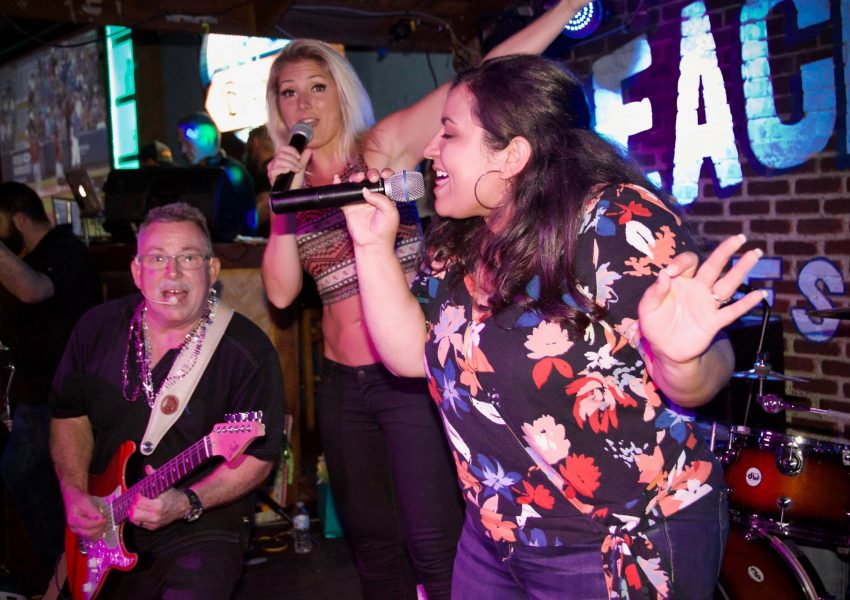 Tropical Avenue Band
When did all this start?

Was it when the hugely successful Miami Vice TV show spent a decade making everyone who got hooked on it wish they lived in south Florida? Or was it just the opposite; was that show a reflection of this movement? Well, whatever happened, all of a sudden … from the shoes to the shades to the suits to the sound … South Beach was hot, hot, hot with its unmistakable signature sound of energetic dance and Latin music and la vida loca spirit. Maybe it’s just the tropical allure, but once discovered, that pumping sound was here to stay and has continued to grow in popularity ever since, spreading all over South Florida, filling the clubs and energizing dancers up and down both Florida coasts.

One band that’s always had a handle on it is Tropical Avenue, a group of five multi-talented folks who can keep an entire room on its feet … or even a whole beach; you have probably enjoyed them at least once at the great Siesta Key Sand Sculpture extravaganza that is a favorite of locals and visitors alike, from bouncing toddlers to polished senior salsa dancers.  They have become a fixture of this celebration, one of Siesta Key’s biggest and best. But between festivals, you can occasionally catch them at one of the clubs where they perform; their lead vocalist, guitarist, and trumpet player, Jeff Hughes, enthuses that the Key’s Beach Club (on the main drag in the heart of the Village) is without question one of their favorite venues to play.

“We feel that the Beach Club is absolutely the best dance club in all of Sarasota,” Jeff says, speaking for the band. “The staff is superb, the crowd is the best … it’s just so much fun every time we play there, we feel like we’re partying with friends instead of playing for fans.“

Which isn’t too hard to understand once you go to the band’s site and check out even a few of the estimated 75,000 pictures they’ve taken of their audiences during the gigs. Whether audience members are listening, dancing, or up on stage with the group to join in on selected songs (bongo solo, anyone?), it’s pretty obvious that that silly saying “a splendid time is guaranteed for all” is spot-on in this situation.

A big contributing factor of Tropical Avenue’s endless energy may lie in the fact that in addition to Jeff’s vocals, Jessica Pignotti contributes her versatile voice as female lead singer, while Jon Cuna (who also plays Spanish guitar and keyboards) adds male lead vocals. Add rhythm section Mark Matson on drums and founding member Rhonda Brown-Hughes’ solid bass, and you have the makings of a great dance band that’s unlikely to run out of steam before the dancers do.

Together since 2007, Tropical Avenue has built a solid fan base and continues to earn new followers with every gig. Their friends-fans are varied because of the bands versatility. In addition to wowing club goers with Latin and Top 40 dance music, they are favorites for corporate parties, charitable events, festivals and celebrations, weddings, and of course any bachelorette gatherings. Jeff laughs that their on stage fan participation got a little crowded at the Beach Club in mid-April when members of not one but TWO bachelorette parties all piled on to “help” the band! (Can’t wait to see those pics!)

If you’ve not yet heard Tropical Avenue you can check them out online, either on their band site, YouTube, or Facebook. The videos give a you a bit of the feeling they bring to a room and the people in it. From Bruno Mars and Mark Ronson’s Uptown Funk through Aretha’s Chain of Fools and AC/DCs You Shook Me All Night Long… well, you can get a real good idea of what you’ll be rockin’ to at the Beach Club on Friday, May 10th in Siesta Village.

And while you’re there, remember to smile for their camera!