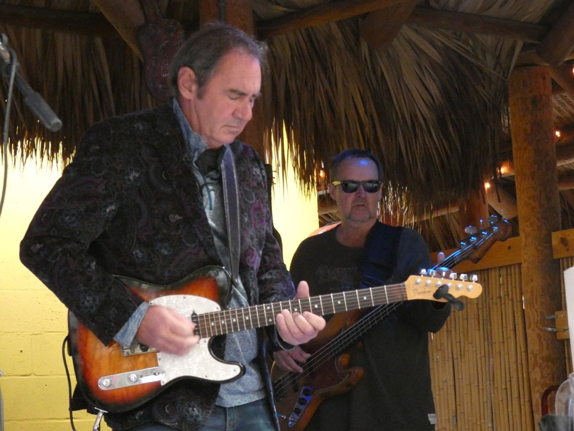 Native Sarasotan Greg Poulos loves playing the Key and beyond

Some things just never get old … and the varied styles offered by guitar player Greg Poulos is one of those things. Born and raised right in Sarasota, Greg’s musical career has been a wonder to behold as music lovers have watched it expand. In Greg’s case, only the very beginning of his playing … when he was a Sarasota High School teenager beginning his career … was a period of obvious improvement. He was so good that the noticeable changes were more in his constantly surprising versatility … the ability and talent were there and obvious all along.

Now freelancing with a few groups rather than working with just one, this becomes even more obvious as he slides easily from one music genre to another; this multi-talented guy can pretty much play anything with anybody and do it extremely well.

Tracing the beginning of Greg’s musical interest, he says his Mom was a pretty fine piano player who performed at the numerous fraternal organization halls when they had parties or meetings. She was the Elks’ president of the Does (the wives-of-members group). Every Sunday afternoon, she’d play in the living room for the family, a variety of familiar songs that she and her husband listened to fairly constantly in their home. Perhaps even more influential was Greg’s dad’s constant whistling; he had a love of old standards and jazz that Greg picked up on and still loves.

The influence of the music his parents brought into the home, coupled with the typical teenager love of Cream, Hendrix, and other icons of the day, led a 15 year old Greg to perform at the teenage entertainment venues of the times … school sock hops, the Municipal Auditorium, Robarts Sports Arena and other non-liquor-serving venues of the day where teens celebrated. Additional influences common to the Sarasota music scene included national name bands like The Moody Blues and Moby Grape at the armory on a fairly regular basis. Southern rockers the Allman Brothers played there the night of Greg’s graduation from high school.

It was during this time that Crystal Pain, the band Greg was in with Richard Price, Ed Carver and Monty Young, got a huge stroke of luck that they may not even have been seasoned enough to recognize as such: Monty’s brother worked for A.J. Perry, who brought in most of the name bands during that time. Crystal Pain often got to do the honors as the opening act, an opportunity most high school bands couldn’t dream of, let alone pull off.

“I think that was the most fun time of my career,” Greg remembers, “and the money wasn’t bad.”

Speaking of money, Greg says pretty much the same thing we hear from every area musician: you can’t do this for the money because it is and has been pretty bad for the last 20 years or so. If you’re seriously going to make a living as a musician, you better truly love what you’re doing because you aren’t going to get rich.

“Oh, I make it O.K.,” he clarifies. “I pay my bills and eat decently and all, but if I were in it for the money it would never work. For me … I don’t know, I can be kind of down or in a bad mood when I’m heading to work, but after five minutes on stage, I’m smiling again.”

Definitely something money can’t buy and that few people are lucky enough to know as a perk of their jobs, and as a freelancer, Greg finds this in a variety of styles and venues. From Siesta Key to downtown Sarasota to nearby towns, as he plays everything from those jazz standards to “music I’ve never even heard before…” it all makes him smile.

Another happiness-inducer is having a girlfriend who not only gets the business but is always willing to step up and help with the non-musical aspects of it like keeping fans posted via web site of the latest bookings and news. In his case, Greg says he’s lucky to have Cindy to come home to. She’s a wizard at all the promotional/technical aspects Greg says he doesn’t enjoy.

“Yeah, I really like what I do,” Greg muses. “I don’t have any ‘rock-star-dreams’ or anything like that, but I enjoy playing for new people all the time and seeing faces in the audience that I recognize from going to school together for 12 years.”

He muses “It amazes me sometimes… how much we move people in the audience.”

He thinks about that for a minute, then concludes “I’m living the life now,” he says, mentioning that he and Cindy live on some quiet acreage with horses, and thoroughly enjoy it. “It’s all good. I play for the love of it.”

Hear Greg Poulos with these bands at these gigs and watch Facebook for additions or changes.

• Friday, March 20 – Realize Bradenton on the Bradenton Riverwalk with Kettle of Fish, 6 – 8 p.m.

• Every Wednesday at Mattison’s Riverwalk with the Billy Rice Band, 7 – 10 p.m.