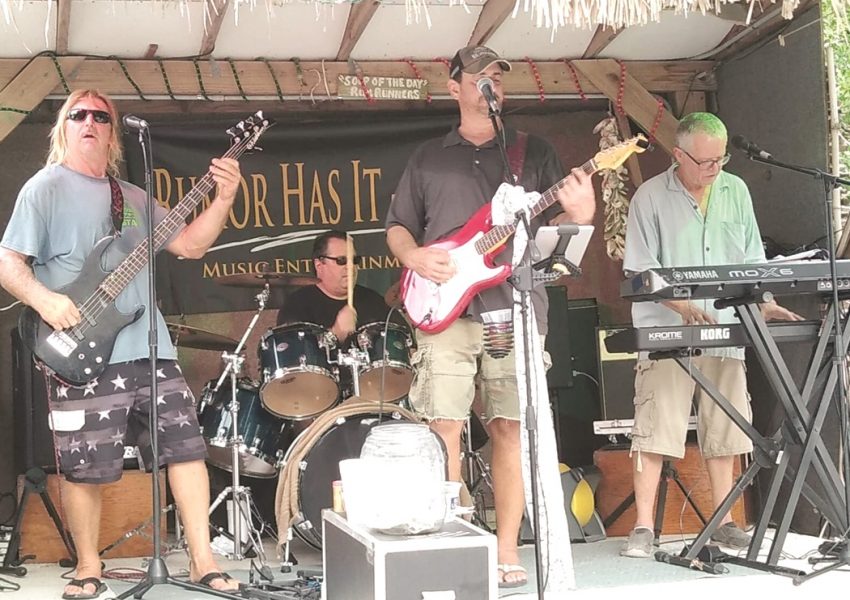 It isn’t often that someone sounds convincing when they say, “Money isn’t everything,” but in the case of Rumor Has It bass player Brian King, it rings true.

“It’s hard to make a living playing music here,” Brian notes. “What they’re actually paying you for is setting everything up and then breaking it all down again, that’s the work part. In between, you better be having fun.”

Which he is. His laid-back attitude serves as proof that the music really is what’s important to him… that and reaching an appreciative audience that enjoys band banter and interaction as much as their music and singing. The foursome has been together since 2016 with Joe Lawhorne on lead guitar and vocals, George Miller playing drums, Brain playing bass and contributing background vocals, and newest member Dave Toombs contributing keyboards and vocals. The band presents audiences with a wide repertoire mix of classic rock, blues, and funk/dance music, catering to whoever is in that club that night.

“The thing about this area is that different rooms have different kinds of audiences,” explains Brian. “You might have a 70-year-old sitting next to a 20-year-old, and you want to play for both of them.”

Fortunately, southwest Florida music lovers are pretty sophisticated and enjoy a wide range of musical styles, as long as they’re all played well. Brian started playing trombone in elementary school and what was then called “junior high” (now known as middle school). From there he went on the road to help out his older brother’s band, observing how it was done while running sound, etc. Which led to his playing bass in bands of his own since about 1978. Part of the year he’d live and work in Florida, filling in his non-playing hours with his love of wind surfing and water skiing. Unlike Florida’s traditional “snowbirds” annual routine, Brian’s winters were spent in Colorado where he loved snow-skiing. This changed to a year-round Florida residency in Nokomis when he met the woman who would become his wife; they have a daughter together and now, much to Brian’s delight, a five-year-old granddaughter.

Rumor Has It is a good-time group that enjoys playing in a casual atmosphere, like their gigs at the Casey Key Fish House where folks can dance along the waterfront at the tiki bar (i.e. it’s very Florida).

If you’d like to check out some Rumor Has It videos, you can do that on their Facebook page, web site, or You Tube; just be certain you search for “Rumor Has It SRQ” as there are some other groups with similar names.

To hear them live this month, dates already booked at press time included Pop’s Tropigrille on Friday, February 6, from 6:30 to 10 p.m.; Casey Key Fish House on Saturday afternoon/sunset, February 7, 3 to 7 p.m. (Be sure to check Facebook and the band web site for gig changes and/or additions.) When you’re there, don’t hesitate to say hello to the guys; they enjoy audience input. “

We like to bop around on stage and interact with the crowd,” says Brian. “It’s all good energy when we play, and a good time.”