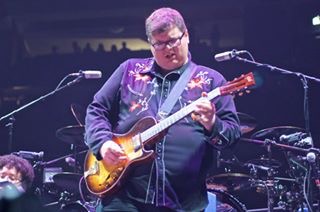 By Charmaine Engelsman-Robins
Photos courtesy of the artist

“People don’t think they know me, but they do,” claims James Albritton.

The reasoning behind that, he explains, is that he plays guitar and sings at clubs and in concerts in lots of different configurations, from solo gigs to backing up others (and just to add to the confusion, that may be on guitar or drums), to regularly playing with Andrew Glasgow,  Damon Jeffrey Owens and John Hetherington as The Hydramatic (his regular full-band home) and in various duo or trio configurations. So you may have seen him and not realized it was him, he reasons… but offers this helpful hint: “I’m the giant, nerdy-lookin’ dude who sings weird.”

(Shaking my head.) No he isn’t. He’s this cute, football-player-size guy who, okay, does wear nerd glasses but hey, they’re very Buddy Holly, so that’s instant cache … and he definitely does not sing “weird:” he sings well. Make that very well.

With the Hydramatic, he’s recently played some fantastic outdoor holiday gigs at the Marie Selby Botanical Garden (one of their frequent venues) and he cites that as one of many high points. Instead of vacationing, when he wants to get away James books out of town tours and gigs. Sort of a working holiday. But you know what they say: “Do what you love and you never ‘work’ a day in your life.” James has found this to be true and, as a result, has a faithful fan base and fairly large following in Massachusetts … specifically the Boston area … and throughout Wisconsin, all great fun. Opening for Bon Jovi in front of 20,000 people didn’t suck either.

But the heart of the regular business is, of course, the clubs. Because so many are somewhat awkwardly set-up in bars that weren’t originally laid out for live music, or even thrown together in what had been a retail storefront, you often hear the music on your way in, well before you actually see the players. Don’t be surprised if your ears and eyes aren’t in agreement when you wander into a James Albritton gig. It can be a little jarring when your ears prepare you for what sounds like an older black guy killin’ some 70’s R&B or soul tunes, and then your eyes find that the singer is this young white guy who wasn’t even born yet when that song charted. He does come across younger than his 34 years and, in fact, says he still gets carded “if I shave.” (If you haven’t already guessed, James also has a wicked wry sense of humor, which comes out a lot on stage.) That’s James Albritton.

He’s a definite throwback with his love of and affinity for such big contributors to the big 1970’s FM radio album R&B and Soul music scene: Al Green, Little River Band, Bobby Caldwell, Earth Wind & Fire, Wilson Pickett and “any band that had Paul Carrack on vocals” (which could include Warm Dust, Ace, Mike and the Mechanics, Roxy Music and Squeeze) as well as other random, lesser known artists of the genre.

The Hydramatic has no problem packing a room; their mixed bag repertoire of funk, jazz, blues, soul, R&B, and all out rock has a little bit of something for anybody and puts folks in a great mood. James is proud of the fact that their gigs draw “real music lovers” rather than just typical bar patrons who can drink to anything being played. The overall chill vibe and solid atmosphere is definitely different than some of the rooms where patrons are often “treated” to some drunken disturbance that isn’t so much dangerous as it is annoying.

“There has never been a fight at one of our gigs,” James brags, adding for emphasis,”Never.”

In addition to his personal gigs and regular work with The Hydramatic, James notes that there are about 20 bands in the area that share a love of R&B and Soul, and they’re bands that are made up of exceptionally good players. It’s a scene where the sound is more important than the individual identity of any one specific group, and they tend to do a lot of melding, jamming, and sitting in with one another just for the sheer enjoyment of making and sharing the music they most love.

This month, you can hear The Hydramatic and soak up some great weather and sunsets as well when they play on the deck at
Boatyard Waterfront Bar & Grill located at 1500 Stickney Point Road, (by the south bridge to Siesta Key on the mainland side). They’ll be playing there on February 12 and 26, and then again on March 19.

For additional information you can check out the Facebook pages for The Hydramatic and also the personal page of James Albritton. Or just venture out to one of the gigs and get the latest. We trust you’ll now recognize James.