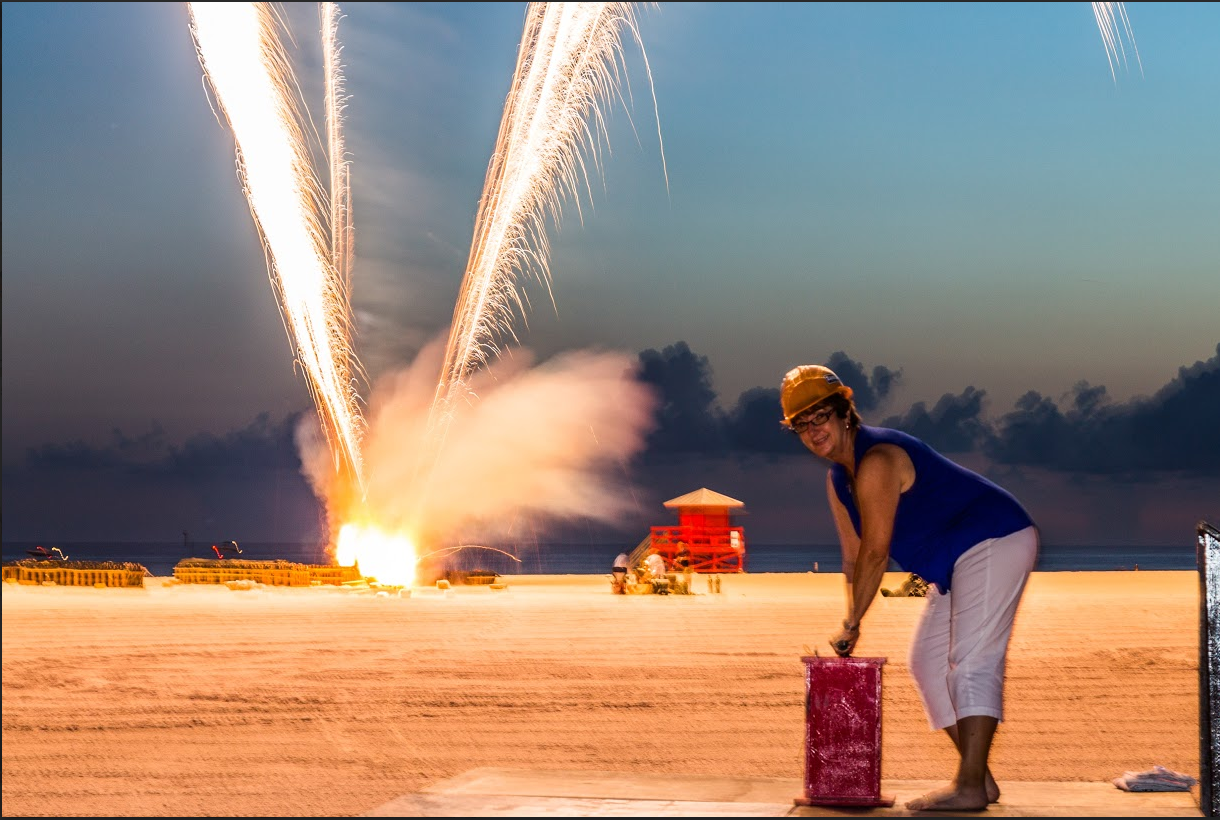 August Siesta Key Round Up
By Bob Stein

Siesta Key Chamber seeking new Boss
As of Tuesday July 7, Debra-Lynn Schmitz, the Executive Director of the Siesta Key Chamber is no longer employed at the Chamber. Schmitz was hired in March 2014 when the position was vacated by Kevin Cooper as he accepted a position with the Sarasota Chamber of Commerce. Schmitz was the manager for the Medina Chamber of Commerce in rural Ohio for 25 years before applying for the open position. The Board of Directors will start the search for a new Executive Director.

donations, time investment and purchasing VIP tickets for the 25th Anniversary 4th of July Celebration.  It was another successful year as the Chamber again exceeded their set goal. The special celebration added 15 minutes to the fireworks show satisfying the crowd with an over the top display and could be seen as far away as downtown Sarasota. Based on feedback, many described it as the best around town. Unfortunately the parking for the event was a bit challenging with the ongoing work being done on the Siesta Key Beach Improvements Project, but everyone took it all in stride.

The day after
After the festivities on the beach July 4, there was work to do. Members of the Siesta Key Association and other community volunteers, along with county workers, spent the morning of July 5 cleaning the parking lot, picnic areas and the beach at Siesta Public Beach. The litter they picked up included remnants from illegal fireworks launched from the beach. The rogue fireworks were not connected with the Siesta Key Fourth of July Fireworks display, organized by the Siesta Key Chamber of Commerce, says Michael Shay, president of the Siesta Key Association (SKA). The illegal fireworks are a problem every year, says Shay. Roman candles and rockets were left in the sand, along with heaps of garbage that some event-goers opted not to throw in nearby trash cans, Shay said. “As the beach gets more and more crowded, the problem is going to get worse,” Shay said. Twenty six, 20# bags of garbage was collected.

Construction project of SR 72 at the Stickney Point drawbridge continues
Crews continue making repairs to the bridge including concrete repairs throughout the bridge, seawall repairs, Tender/Control House improvements, painting, and repairs to the mechanical and electrical components of the bridge. Motorists should expect nighttime/overnight traffic shifts to one bridge while crews work on the other between the hours of 9 p.m. and 6 a.m. extended bridge openings of up to 15 minutes may also occur during this time. Expected completion is late 2015/early 2016. Coastal Marine Construction, Inc. is the contractor.

Looking for a barber?
With the closing of the Village Barber on the Key, residents may be looking for a barber close to the island. See the cover article “The Village Barber moves off the Key”. Another barber shop for those close to the north bridge is South Gate Barber Shop at 2081 Siesta Drive, across from Westfield Southgate Plaza. They finish every cut with “Hot Lather”.  Call for appointment or stop by.  941-312-6001.

New restaurant on the Key
Extensive renovation has been taking place in the former Javier’s Peruvian Restaurant location where the Toasted Mango Café is set to open another location early August.  Owners Kimberly Duffy and Sandi Wagner opened their original café near downtown in 2011 and it has proven to be popular with the locals and visitors as evidenced by an award they received in January from MSN naming it one of the best diners.  The restaurant will be serving breakfast and lunch daily from 7 a.m. to 3 p.m.

The building on Siesta Key was purchased from the Aranas, so it appears Kimberly and Sandi will be here for the long haul. (Javier and Mary Arana, owners of Javier’s Restaurant decided to retire after 27 years.)

The Toasted Mango Café is located south of the Stickney Point Bridge, in the Crescent Plaza.

Studio Rubylake’s August schedule
Studio Rubylake is offering a vacation package: $25 for unlimited group classes for 7 days. Classes offered are Siesta Pilates, Sunset Fusion, Zumba, Erotica Fitness, and Siesta Key Beach Classes. Because of the outdoor locations of classes, it’s important that instructor can reach you to confirm if class will be held on given day.  Signing up online or calling to reserve a spot in a class is always required. Please sign up online or call to book your appointments for classes at www.StudioRubyLake.com or call 941-312-0700. Studio Rubylake is located in Siesta Key Village at 5219 Avenida Navarra.

August beach events
As the kids go back to school the events on the beach wrap up in early August. The popular Kids Summer Beach Runs are August 4 and 11 from 5:30 – 7:30PM, $1 registration. The last event is the MultiRace Triathlon, Sprint and Olympic distance on August 1st from 7 – 11AM, 400 participants, running on the beach, cycling on the open course. Both events are at the Siesta Key Public Beach sponsored by the Sarasota County Government.

Sarasota County settles case of jogger killed by DUI driver
Three years following the death of Donna Chen, a 53-year-old Siesta Key resident who was fatally struck by a drunk driver as she was jogging with her dog, Sarasota County commissioners unanimously approved a $200,000 settlement.

The DUI manslaughter tragedy occurred back in 2012.  At that time the Chen family filed a suit against Sarasota County and the Sheriff’s office alleging the accident could have been prevented if two deputies had done their job properly.  The Sheriff’s Office has maintained that although the deputies knew Blake Talman likely was intoxicated, they had no legal reason to arrest him at the time.  According to a sheriff’s spokesperson, the 22-year-old was drunk but not being disorderly, and he told deputies that he was walking into Siesta Village or back onto the beach.