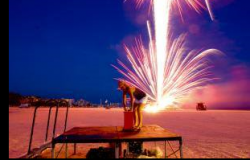 The Easter Egg Hunt on Siesta Key this March was a big hit, says Ann Frescura, Executive Director of the Siesta Key Chamber of Commerce, which organized the event. “We had 150 children registered, and everyone really enjoyed it,” Frescura says.

During the behind-the-scenes preparation leading up to the event, Frescura’s office was filled with Easter eggs. “It was wall to wall, we had 1,100 plastic eggs and 150 goodie bags,” Frescura says. Before the Mach 31 event, Chamber staff and volunteers worked to ensure that each age group would have unique trinkets and prizes.

The Easter Egg Hunt is just one of the events that the Siesta Key Chamber took over after the Siesta Key Village Association (SKVA) dissolved at the end of 2016 and merged with the Chamber.

This was the second Easter Egg Hunt organized by the Chamber, and for the second time, the event was held at Turtle Beach — spurred by the Chamber’s recent effort to increase promotion and coordinate more events on the South end of the Key.  New events the chamber took over from SKVA, include: the Valentine Stroll, annual Village Craft Fair, Siesta Fiesta, Safe Treats for Halloween, and the annual Light up the Village Holiday Parade (now called the “Light up Siesta Key Holiday Parade”).

In about two decades, the Siesta Key Chamber has gone from financial straights and struggling to retain business members to a successful and extremely-busy nonprofit operation.

It has approximately 450 members; in 2017, 70 new members joined. The chamber now runs a total of about 40 events a year. In addition, the chamber is also home to a very active visitor’s center at its office, 5114 Ocean Blvd.

At the visitor’s center, last year the chamber went through the Visitor’s Guides (30,000 copies) and visitor maps (47,000 copies). “We ran out before the end of the year,” Frescura says. “We used everything we had. It’s an example of the volume of printed material that is picked up by tourists or mailed out to people who have requested packets.”

The Siesta Key Chamber runs events such as the 9th annual Crystal Classic Sand Sculpting Festival — an event that brought together 200 volunteers in 2017. The chamber partners with the Siesta Beach Festival, Inc. to produce the annual event. As well as smaller events — such as the Easter egg hunt. These help bring the community together, but they also help promote businesses who are members of the chamber. “Serve Pro showed up to help with face painting” at the egg hunt, says Mark Smith, immediate past chair and a longtime board member of the Chamber. “They had a tent set up, and had a chance to get their name out there.”

The Siesta Key Chamber is always a busy place, but it has been even busier lately. There’s all the attention from the No. 1 Beach rankings, and a shrinking “season.”

“Each year I have been here and from what I understand from others who have been here longer, there used to be a better defined high season and an off-season,” says Frescura, who started in her role as executive director in January, 2016. “Season is stretching out. Siesta is not only a popular spring break and snowbird destination. It is more popular into the summer and into the fall.”

The significant changes influencing the chamber came from within, during the mid 2000s.

Mark Smith notes that when he first got on the chamber’s board, in around 2006, its financial health was improving after some earlier financial struggles. “It was just stating to turn around,” Smith says. “The dark times were earlier.”

In the 2000s, a generous Key business leader made a contribution to help keep the chamber afloat, notes board members from the time.

In addition, around the same time, active board members became more involved in organizing and volunteering for events and other duties. There were about 250 business members in 2006, but that was growing. “The more active your board, more people want to join the organization,” Smith says. “There is that ripple effect.” Events such as the annual golf tournament were generating some income for the organization.

As the operating entity, the Chamber also held its inaugural Crystal Classic eight years ago. The event is such an undertaking that volunteers are already planning for the 9th annual event to take place Nov, 9-12, 2018. “As far as exposure, it brought 60,000 visitors to the beach,” Smith says. “It brought $9.1 million in economic impact to Sarasota County over four or five days. The event generates money for the chamber.”

“That event, to me, has really helped with exposure,” Smith adds.

Aledia Tush, co-owner of CB’s Outfitters, and a longtime previous board member, says recent active boards of directors as well as the tenure of several recent executive directors helped steer the chamber into more solid financial footing. “We had several very good directors over the past few years, and that has helped,” she says.

Tush believes the merging of the SKVA and the chamber was a positive change for the business community on the Key.

“Everybody is working together, and that is one of the best things I’ve seen happen,” Tush says. Many representatives of the SKVA were already members of the chamber, but now those leaders from the Village have “joined hands” with other chamber members and everyone is working collaboratively and more effectively. For example, Tush noted, some former SKVA representatives are working on an event planning committee for events that will be held in all corners of the island in the upcoming year.

Although Tush is no longer a sitting board member of the chamber, her son, Mason Tush, co-owner at CB’s, will carry on the tradition of being involved, as he now serves on the chamber board.

The upcoming year will also be busy for staff at the chamber as they go through some transitions. A new promotion and events coordinator, Rachel Dixon, joined the chamber in March and has already “hit the ground running,” Frescura says.

Frescura is currently reviewing applicants for the open position of membership director, an important position at the organization. Frescura has conducted several initial phone and in-person interviews and, as of press time, was in the process of narrowing down the list of candidates to a list of finalists.