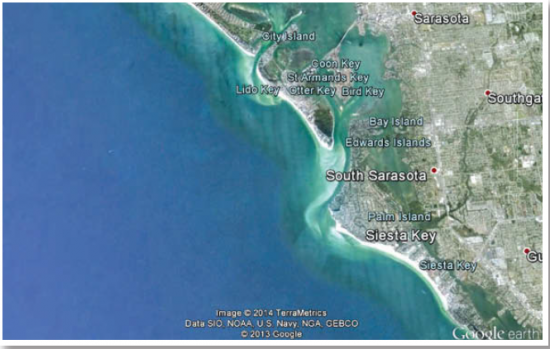 In preparation for a day-long Circuit Court hearing set to begin at 10:30 a.m. on Friday, July 19, the Siesta Key Association (SKA) has sent a letter and a legal notice to the City of Sarasota, seeking an abundance of materials.

The evidentiary hearing this summer will provide the SKA an opportunity make its case that the City of Sarasota has failed to adhere to applicable city and county regulations as the city seeks to remove sand from Big Sarasota Pass to renourish 1.56 miles of South Lido Key Beach.

The July hearing date was chosen as a result of an April 23 status conference, which followed 12th Judicial Circuit Court Judge Andrea McHugh’s April 18 denial of the City of Sarasota’s motion to dismiss the case the SKA originally filed in March 2017.

The court appearance record for the April 23 status conference noted, “Parties to work together to conduct limited discovery on the issues outlined in the [judge’s April 18] order for evidentiary hearing and to stipulate to as many facts and exhibits as possible prior to hearing.”

The SKA has contended from the outset of the case that, as the City of Sarasota has pursued the dredging of up to 1.3 million cubic yards of sand from Big Pass, the city has not adhered to a policy in its own comprehensive plan or — as also required by city regulations — to a policy in the Sarasota County Comprehensive Plan. The city was a co-applicant with the U.S. Army Corps of Engineers (USACE) in seeking — and receiving — a Florida Department of Environmental Protection (FDEP) permit for the Lido Renourishment Project.

SKA leaders have argued that the USACE’s modeling of the planned initiative was inadequate, as the federal agency uses proprietary software that is not the most up-to-date for making determinations about potential effects. A number of Siesta residents contend that the dredging of the pass and its ebb shoal will lead to property damage on Siesta. However, USACE and City of Sarasota representatives have remained steadfast in their assertion that no harm will come to Siesta Key.

As a result of the direction Judge McHugh provided during the status hearing, the SKA sent a letter to City Manager Tom Barwin on April 23 to begin the discovery process.

The letter pointed out, “At present the issue in the lawsuit is whether the City has ever evaluated and issued a written determination that the [Lido Renourishment] Project is consistent with the City’s Comprehensive Plan, the County’s Comprehensive Plan, and all other applicable local, regional, state, and federal plans and regulations regarding the project. “In addition,” the letter continued, “the City’s attorneys have argued that SKA has not made an ‘express and distinct demand’ that the City make a determination (in compliance with Chapter 163, Florida Statutes) whether the Project in its current design is consistent with the [city and county comprehensive plans and all other applicable regulations].”

The SKA has argued that because the city never issued any public determination about the proposal’s compliance with local regulations, the city has failed to “trigger” a 30-day period Chapter 163 allows to contest such a finding.

In an amended complaint filed in January, the SKA’s attorney, Kent Safriet of the Tallahassee firm Hopping, Green & Sams, also pointed to a May 2017 meeting between SKA representatives and senior city staff to show that the nonprofit had asked city leaders to make the necessary determinations about the Lido project. After the city’s outside counsel in the case — John R. Herin Jr. of the Fox Rothschild firm in Miami — impugned the validity of that information, the SKA produced an email exchange as evidence supporting its assertion about the May 2017 discussions.

In a separate action, the SKA filed a formal request with the Circuit Court on April 23, seeking specific materials from the city. Among those it has requested are “[a]ll documents relating in any way to a meeting with any City official and Bob and Catherine Luckner on May 23, 2017.”

Robert Luckner, who is Catherine Luckner’s husband, is on the SKA’s Environmental Committee. Both Luckners have undertaken extensive research over the past years in an effort to stop the removal of sand from Big Pass.

The city documents are due by 9 a.m. on May 23 at the Hopping Green & Sams offices in Tallahassee, the court document says, though it provides the city an opportunity to have its counsel work with Safriet on an alternative schedule.

Details of the demands

The April 23 letter to the city points out that city counsel Herin “has indicated a need to call 2-4 witnesses and take numerous depositions before the [July] hearing. This futile exercise will most likely cost the City taxpayers tens of thousands of dollars.”

Therefore, the letter continues, “in an effort to avoid such a needless waste of money and resources,” the SKA demands that the city “make a written determination” that the Lido project “is or is not” consistent with the following, at a minimum:

Then, on May 14, the SKA filed notice with the court that it planned to take a deposition, by telephone, of City Engineer Alexandrea DavisShaw. That is set for June 27.

“The deposition will be taken under oath before a certified court reporter or some other Notary Public for the State of Florida,” the document said.