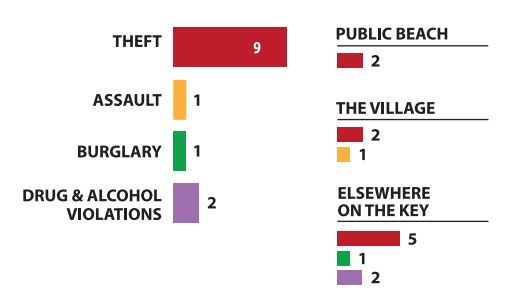 A man reported an unknown person entered his locked residence and removed a $24,000 check from his wallet and $4,000 US and $1,000 Swiss Francs from his safe. The complainant believes he knows the suspect who possibly committed the crime but admitted that several other people had been in his residence. He believes the suspect learned the safe code by watching him open it. No fingerprints were discovered on the safe. A stop payment was issued for the check and a new one was issued to the complainant. The officer noted that the wallet that contained the check had $2,400 cash in it that was not taken. No surveillance cameras were in use at the time.

A woman investigating a noise coming from outside her house saw three or four unknown suspects walking Southbound on Midnight Pass. They were crossing the road several times as if going from house to house. She reported they all looked less than 20 years old. She noted that the center console, glove box and center ashtray in her unlocked car had been opened. The driver door of her vehicle was open and the dome light was illuminated when she arrived. No items were discovered missing at the time. The vehicle was successfully processed for fingerprints. Another officer detained one of the suspects, a juvenile, as the responding officer was en route to the scene.

The juvenile from the above referenced incident was detained and arrested after being caught with stolen items. An officer was responding in reference to a nearby vehicle burglary in progress. He observed the defendant walking across Midnight Pass with visible items in his pockets.  The suspect immediately threw a Michael Kors wallet on the ground and admitted to burglarizing the vehicle. He also pulled ear buds and an Orange Theory heart monitor out of his pocket and threw them on the ground. The officer also found the victim’s purse in a nearby parking lot. The victim stated she wished to press charges and the juvenile was arrested and taken to jail.

A woman reported her IPhone 8 Plus was stolen from a Village bar. The woman and her daughter were sitting at the bar listening to the band. Around midnight the woman left her phone on the bar while she went to the restroom but forgot to tell her daughter to keep an eye on it. When she returned her phone was gone. It was valued at $1100.

A woman reported she and an acquaintance were arguing the night before when the acquaintance left the residence. He returned early the next morning, gathered his belongings and left. He also took the victim’s cell phone and house key. She was not able to locate the phone with the location feature. She did not wish to press charges at the time and signed a waiver of prosecution.

Two women were the victims of theft. They stated they were at the beach and left their purse and wallet with their belongings on the beach. Upon returning, they found it all gone. The missing items included credit cards, social security cards and drivers licenses. There were no suspects.

An officer on patrol noticed a car stopped halfway in the middle of the road and halfway in a parking space (prohibited 9:00 pm-6:00 am) facing Eastbound on North Shell Rd. The officer smelled marijuana immediately upon walking up to the car, as the window was open. He observed in plain view a marijuana blunt sitting in an ashtray. The driver explained he was trying to relax while smoking marijuana and talking to his baby’s mom (passenger). After handing the officer the blunt, he was asked to step outside the vehicle. The subject spontaneously stated that he also had meth and mushrooms inside his pocket. He was placed under arrest after turning over the drugs.

The passenger in the above mentioned vehicle was arrested for possession. A deputy had noticed a Taco Bell paper bag sitting on her lap. On top of the bag was a clear glass smoking device with white residue. The passenger also made spontaneous statements prior to the vehicle search that she had a couple more pipes, a marijuana grinder and meth inside a pouch inside the car. The passenger was asked to step out of the car and officers found the bag containing methamphetamine, a scale, glass smoking device with marijuana residue and THC oil. A plastic container was found that contained another grinder, a metal container with marijuana residue and a pack of rolling papers.