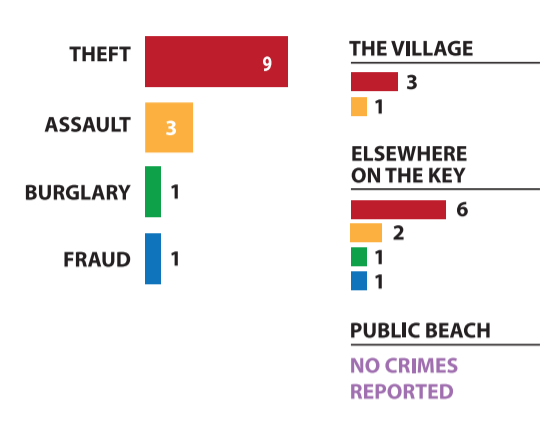 An employee of a village shoe store found a shoebox in the wrong location. The box contained an old pair of tennis shoes instead of the Sperry Billfish boat shoes that belonged in the box. A review of the in store video showed a man in his early 20s switching out the shoes and leaving without paying for them. A screen shot of the suspect was submitted as evidence.

A woman reported an unknown person had rummaged through the compartments of her car, although nothing was stolen. She found the car with the door ajar. DNA swabs were collected from the glove box and submitted to forensics.

A woman reported her IPhone 7+ was stolen from a village bar. She had placed her phone down to get a drink from the bar and an unknown subject stole it. Her friend tracked the phone to an address in Sarasota. That address was an apartment building with 8 different units. An officer checked the exterior of the building and vehicles in the parking lot with negative results. The victim has a pass code set up to access the phone. She will have the phone shut off.

A man recovered an electric bicycle in the bushes between his house and next-door. The bike matched the description of an electric model reported stolen the day before.  The owner was contacted and responded to the scene. The bike, valued at $7000, was identified and returned.

A homeowner who was out of town called his neighbor stating he could see on surveillance video that someone was on his property and took his Yeti cooler. The neighbor explained that when he arrived, the suspect was gone and that nothing else appeared to have been taken. The cooler, valued at $1000, was taken from the side of the house.  The homeowner believes the suspect parked his vehicle on Midnight Pass, walked through the bushes and exited the same way. The video was not clear enough to make out a facial description of the suspect.

A local news agency employee was working on a story at a village establishment when her car was burglarized.  The woman had parked her unlocked car near the kitchen area where employees were entering and exiting.  When she returned she found her wallet was no longer in her car.  Unsure if she had mistakenly left her wallet at home, she drove home to check. After finding it was not in her home or car, she reported it stolen. The wallet contained her driver’s license.

An anonymous caller reported numerous people were fighting near the intersection of Higel and Treasure Boat. Officers met with the victims who explained several friends were hanging out at the address listed when they decided to go out to dinner. Three female friends made it out to the driveway ahead of the males. At this time, a red SUV containing six males pulled up to the driveway and started flirting with the females. The male friends exchanged words with the males in the truck, who began to drive away before pulling off the road, getting out and approaching the victims in an aggressive manner. When the victims argued with the males, they were “jumped “and beat up. The two males sustained minor injuries and the female friends who tried to break up the fighting were pushed and shoved during the altercation. One female was punched in the stomach and pushed to the ground. None of the victims recognized any of the six males, although one victim thought several looked familiar and might have attended or recently graduated from Riverview. One case number was provided for all victims since they are close friends or dating. Photos were taken of the injuries and the victims were told to report back if they have any other information about the suspects. Deputies checked the Key and no vehicles matching the description were located.

A Roll bike valued at $650 was stolen from a bike rack located on condominium property. The lock was cut by unknown means. The owner stated he would look for the serial number and report back. There were no cameras in the area.