Series of hurricanes in 2017 has resulted in new state admonition that people should be able to take care of themselves for a week, not 72 hours, after hurricane hits 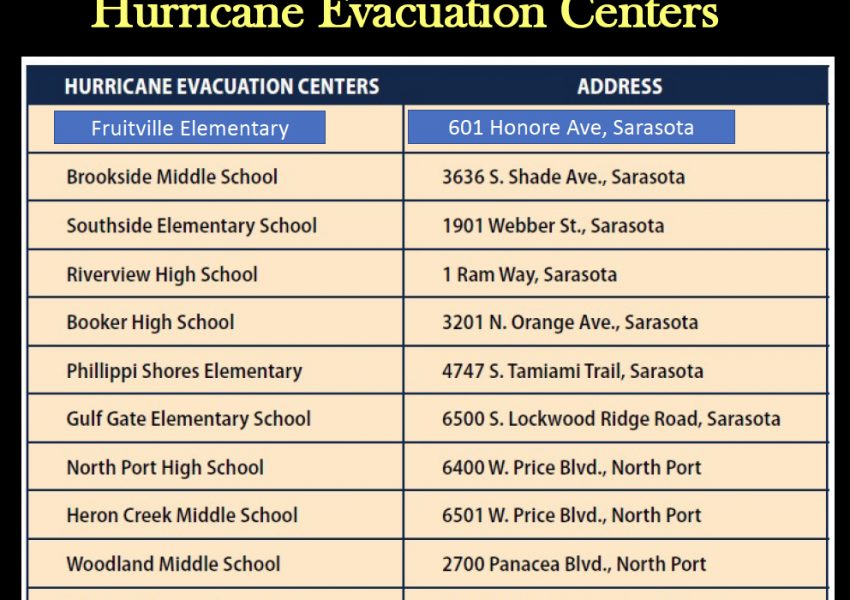 In the past, Sarasota County’s emergency management chief told Siesta Key Association (SKA) members on May 2, he used to advise people to be prepared to be on their own for the first 72 hours after a natural disaster occurs, such as a hurricane strike.

However, Ed McCrane continued, 2017’s series of storms has led to the necessity of changing that guideline. With Hurricanes Harvey and then Irma and then Maria devastating so many different areas — and other natural disasters, such as California’s wildfires, having become more frequent — Florida Emergency Management leaders have made it known, McCrane said, that people should have enough supplies set aside to manage on their own for a full week.

“FEMA is only so big,” he added, referring to the Federal Emergency Management Agency.

McCrane also had new slides in his presentation to underscore the need for people to evacuate if a hurricane is coming and they live in an area vulnerable to storm surge.

Early this year, he said, he took what he called the “scenic route” as he traveled through the Panhandle to get a firsthand look at the devastation Hurricane Michael wrought last fall.

The storm was a Category 5 when it made landfall near Mexico Beach, new data show. Michael’s storm surge was 18 feet, McCrane pointed out. Hurricane Katrina of 2005 holds the record, he added: 34 feet.

Michael started out as a tropical depression, he explained. In 12 hours, it strengthened from a Category 1 to a Category 3, he said; then, within 72 hours, it was a Category 5 — the highest level for a hurricane.

Because of the width of the Continental Shelf in proximity to Florida, he continued, 18 to 20 feet probably would be the maximum storm surge, or storm tide, that any part of the Sarasota County shoreline ever would see. “We expected 6 to 10 feet of storm tide [with Irma],” he pointed out. Yet, after that storm came ashore at Marco Island in September 2017, McCrane noted, it headed east. “We only got Category 1 winds, at that.”

As he drove through the affected area in February, he said, he saw “no gas stations, no restaurants, no ‘Mom and Pop’ stores” that remained open. “Everything was destroyed.”

All of Siesta Key is in what county staff has designated Level A, McCrane explained. That comprises the areas most vulnerable to storm surge.

In the aftermath of Irma, he continued, an in-depth review of county procedures led to 93 recommendations for changes. Staff has completed about 85% of those, McCrane said. One of the most important, he indicated, was a switch to the use of “flood levels” instead of “flood zones.”

He and his staff found out after Irma, McCrane noted, that even though all mobile home park residents should evacuate in advance of a potential hurricane strike, some county residents learned that even though they lived in such housing, they were in zones considered far less likely to flood. Thus, they did not leave their homes.

If a person is uncertain about the evacuation level in which that person lives, McCrane explained, the person can go to the county website — www.scgov.net — and click on the part of the bar at the top of the page that says, “I want to …” The screen that comes up, he noted, has another list of headings. One of those is “Find.” By scrolling down, the person will see “My Evacuation Level.” After clicking on that link, the person can enter his or her address and then find out the level.

One audience member pointed out to McCrane that many newer condominium buildings on the Key appear to be strong enough to withstand a major hurricane. Why, then, the man asked, should residents in such buildings evacuate?

If a person lives on an upper floor, McCrane responded, the person will experience higher winds at that altitude than if the person wee closer to the ground, and those winds could break windows.

Additionally, McCrane said, “Storm surge has a way of eroding and undermining structures. Your building will be surrounded by water.”

If the person were to suffer a medical emergency, McCrane added, no one would be able to respond.

Furthermore, he said, the building likely would not have air conditioning after the storm or even water to flush the toilets, based on the design of water systems in most high-rise structures. The elevators also would not work.

“It’s not a safe place to be,” McCrane summed up the situation. “You put first responders in harm’s way when you stay.”

The bridges to Siesta also could be damaged, McCrane pointed out. One of his slides illustrated major damage to the ramp leading to a bridge on the Gulf Coast in the aftermath of a hurricane this century.

McCrane also noted that he had talked with people who did not evacuate in advance of storms, after they had been advised to do so. Following their experiences with the hurricanes, they told him they never again would stay in place, he added.

In fact, McCrane said, as he was driving along the beach in Pensacola in February, a man ran out of a crumbling building toward McCrane’s four-wheel-drive SUV. “He rode out [Michael] with his two dogs,” McCrane noted. “He said he’d never do that again.”

Still, McCrane continued, if someone feels it absolutely necessary to shelter at home after being urged to evacuate, the person should let Sarasota County Emergency Management know.

(In past presentations to SKA members about hurricane season, McCrane has indicated that such information assists first responders as they search for survivors in heavily damaged areas.)