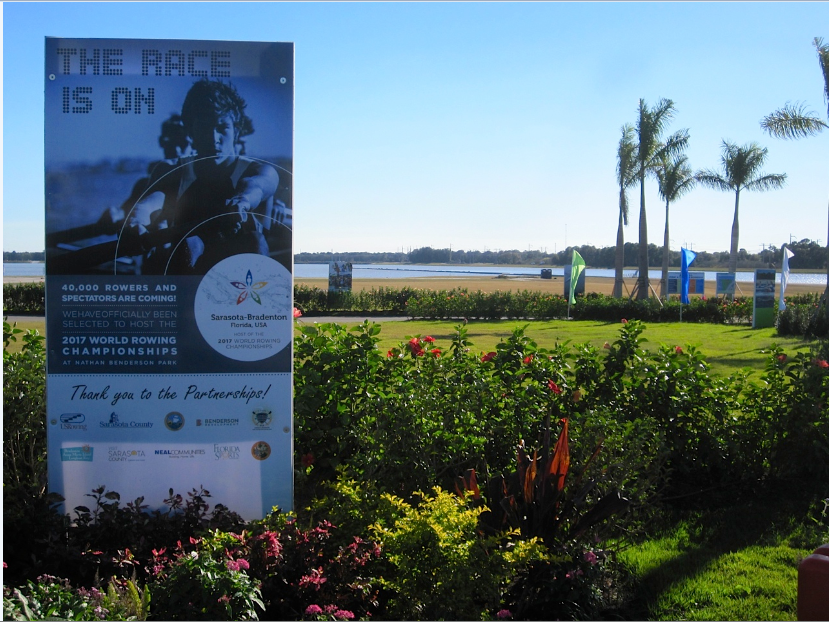 “If you build it, they will come…”

That line from the 1989 film “Field of Dreams” starring Kevin Costner about a Midwestern farmer compelled by mysterious forces to build a baseball diamond in the middle of his corn field, could also be the story line for Sarasota County’s recent success leveraging under utilized, essentially forgotten and unproductive public properties into engines of economic success that have helped draw large numbers of affluent visitors to the area.

The list includes Nathan Benderson Park just west of I-75 off the University Parkway exit, the Celery Fields just east of I-75 near the Fruitville Road exit and Rothenbach Park, three miles east of I-75 along Bee Ridge Road.

Unlike the crown jewel of Sarasota County’s Park system, Siesta Key Beach, none of these properties were initially coveted for their breathtaking natural beauty or unique environmental features. Indeed, all three were downright pedestrian in terms of their features and former use. 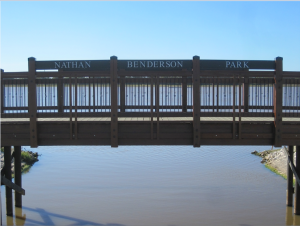 Southwest Florida, most notably the construction of Interstate 75 in the late 1970s and early 80’s. It languished for years as a relatively obscure, little used parcel of land popular with nearby residents of The Meadows. It was known as a place to take a morning or evening stroll or jog or as a place to run the dog. After the former rock pit gradually became a lake, filled by the accumulation of summer rains over several years, area fisherman eager to wet a line were drawn to it as well. But as a destination worthy of national, much less international attention? Hardly.

But amazingly, that is the position the park now finds itself in, with recent announcements that it will host the World Championships for rowing in 2017 and also a series of Olympic Pentathlon qualifying trials starting next year and continuing through 2016. The economic impact for the area will be measured in the tens of millions as teams and visitors descend on the area to train, compete and view the many trials and practice sessions leading up to the finals.

In the meantime, the park continues to host scores of other local and regional rowing events that have already bolstered the local economy in ways few could have imagined back when the property was first added to the county’s park system in the 1990s, when it was first named North Metro Park.

No one can say for sure who had the original idea to utilize the lake as a rowing venue. In an article written by this reporter for The Pelican Press in 2009 covering the Florida Scholastic Rowing Association State Championships, one of the first large scale events hosted there, Jessica Ritter, then a planner with Sarasota County’s Parks and Recreation department recalled her first memory of such discussions dating to 2006 with community input during hearings held to review Benderson Development’s original site plan for the University Town Center Mall project, which finally broke ground just this year after several long delays due to economic conditions related to the Great Recession.

Others point to the early efforts of Sarasota Scullers Coach Dragos Alexandru. 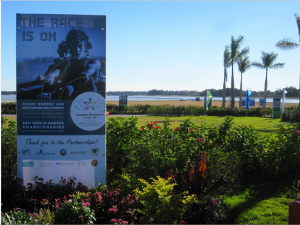 John Leming, president of the Sarasota Crew, in an earlier interview praised the contribution of Randy Benderson, son of the park’s namesake, Nathan Benderson. “Randy was one of the first to really see the potential. He played a key role in the germination of the whole idea,” Leming said at the time.

In any case, suffice to say, it was a grass roots effort. And community involvement remains strong to this day, with the development of the rowing complex and efforts to bring high profile events like the world championships and pentathlon event coordinated by the nonprofit Suncoast Aquatic Nature Center Association, with assists from other members of the community as well, including former congresswoman Katherine Harris who played a key role in landing the pentathlon events.

The rags-to-riches story is much the same one exit south at the Celery Fields, so named because of the area’s long history as an agricultural center where winter vegetables and of course “celery” were grown for consumption locally and for shipment nationwide. Area roads, with names such as “Packinghouse” and “Albritton Avenue” attest to the neighborhood’s long-standing agricultural heritage.

Owen Comora, a naturalist and avid bird watcher who conducts regular interpretive talks for bird lovers who now flock to the area to pursue their hobby recalls a story told by Hall of Fame Negro League baseball player and Sarasota native Buck O’Neil in Ken Burns award-winning PBS documentary “Baseball.” O’Neill worked as a young man in the fields and remembered those days when asked about the tough conditions black ballplayers often faced on the road back when he played. He told the story of how he and his teammates had to sometimes take 30 minute turns standing on the running boards of the car as they traveled – through rain, heat and cold – because there wasn’t enough room for everyone inside the vehicle. But when asked how he dealt with such harsh conditions he replied “that was nothing…working in the celery fields in Sarasota, now that was hard.”

Later, the fields became part of a massive flood control project the county participated in to help quickly move storm water from the Phillipi Creek basin after severe flooding damaged scores of homes in the area in the aftermath of several heavy rain events in the early 1990s.

With the added water diverted to the fields came more fish and with more fish, more wading birds, especially avian hunters like Osprey’s and Kingfishers. With input from local naturalists like Comora and other members of the local chapter of the Audubon Society, shore vegetation like elderberry, saltbush and cord grass was planted.

In addition to drawing more wildlife to the celery fields, especially wintering varieties, the efforts also slowly began to draw the human variety of snowbirds. This species is especially well known for the passion with which it pursues its hobby and has been known to range far-afield in its natural pursuits; it is also well regarded throughout most of its range for its free-spending habits.

At one of Comora’s recent informal Thursday morning interpretive gatherings at the end of the boardwalk that runs south just off Palmer Road between Apex and Raymond Roads, several examples of the bird-watching species, hailing from as far away as Vancouver, British Columbia in one case and the Philippines in another, were observed. The visitors raptly watched the morning flurry of feeding underway in the nearby waters and reeds while Comora excitedly pointed out any new arrivals swooping in. “Look: there’s an Osprey, he exclaims at one point. “Can you see him?”

Indeed, Comora clearly shares the passion of those who have gathered around him this day, freely passing along his knowledge of the birds he spots. “See how he turns the fish around as he flies so the head faces forward? That’s because it’s more aerodynamic that way…it makes it easier to fly.”

The growing flock of visitors to the Celery Fields has resulted in a rush of activity recently. The county has recently coordinated a project to plant thousands of trees in the area, including hundreds of mature specimens in the median of Palmer Road and on top of the spoil hill, some have affectionately dubbed Mount Sarasota (though perhaps Mount O’Neil should be considered to honor the former baseball great who toiled there)? When the area was dredged for the aforementioned drainage project, the county created the hill using the dredged material. The result is yet another example of the credo “If you build it they will come.”

While not a mountain by any standard other than that offered by Florida’s flat topography, it has become a draw all its own, challenging joggers and mountain bikers alike with an ascent that is rare to find in these parts.

Sarasota resident Kathryn Dooher tries to ride her bike at the Celery Fields at least once a week. She has traveled to such mountain biking mecas as Moab Utah and Crested Butte Colorado, but enjoys the convenience of having a hill – even a modest one like the one here  – in her backyard.

Area fitness instructors have organized boot camps at the hill, advertised on Craig’s List, to challenge participants with repeated sprints to the top.

The increased traffic at the park, from locals and visitors alike, has prompted the county to begin work on adding permanent restroom facilities, a welcome replacement for the port-o-potties that now dot the preserve. Also coming, a welcome center sponsored by the local Audubon Society that will add to the experience of the growing number of birders visiting the site. All of the funding for the center is the result of the local group’s fundraising efforts.

Next, stop, one exit south on I-75 and then east along Bee Ridge to Rothenbach Park. Here the trend continues, with perhaps the most fitting use of the phrase “diamond in the rough.” This place was literally a dump, serving as Sarasota’s primary landfill for several generations.

Now it includes a world class children’s playground that is usually alive with the sights and sounds of gleeful young ones, especially on weekends when the nearby covered patio area, complete with fireplaces, grills and environmentally conscious restrooms usually hosts one of the many children’s birthday parties held at the park.

There is also a 3.8 mile trail circling the former landfill, much of it shaded by magnificent, mature live oaks, especially along the eastern portion. Bird watching opportunities can be found here as well along with other wildlife. A family of perhaps a dozen deer is regularly spotted grazing in the more remote parts of the park.

On top of the former landfill, there’s a landing strip/runway, but it’s not for conventional aircraft. Rather, it’s used by the Sarasota Radio Control Squadron, a club of radio controlled model airplane enthusiasts who use the park’s high vantage point and lack of obstructions to enjoy their exhilarating hobby. The models flown are scaled down versions of popular military and general aviation models that are finished with meticulous detail. And they are not small. Some have wingspans of eight feet or more. From a distance their high-speed acrobatic maneuvers look like they are being performed by full-size aircraft.

While the hobby doesn’t draw as many visitors to the area as the rowing events held at Benderson or as bird-watching at the Celery Fields, the squadron does host several “fly-ins” throughout the year that draw many out-of-town hobby enthusiasts to the area, both to participate and as spectators. And to see the aircraft flown at these events is to understand that like the rowing and birder sets, these folks also have a good bit of disposable income to spend while they’re in the area.

So there you have it, three parks, each with humble beginnings that have grown to serve dual purposes: places for locals to gather and enjoy the amenities offered, and drivers of the region’s economic success.

Parks and Recreation Director Carolyn Brown is humble enough to know that the county can’t take all the credit for the economic impact. Still, she’s not one to look a gift horse in the mouth. In a phone conversation shortly before Christmas she expressed gratitude for the community involvement that has brought so much attention to the area.

…All focused on what was once an abandoned rock pit, a flood control project and a former landfill. It just goes to show what can be accomplished when citizens get involved and government listens.