Liberation began on the beach–women’s swimwear evolved despite regulations 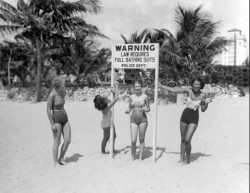 As beach vacations became routine, the women’s apparel industry capitalized on the demand for innovative, attractive swimwear. Colorful, impactful swimsuits have become especially popular during spring breaks and the summer season. Stimulated in part by the avant-garde swimwear fashions displayed on supermodels in the annual swimsuit issue published Sports Illustrated since 1964, the feminine swimwear industry has developed into a $3 billion per year business in the USA alone and $20 billion worldwide.  Because of the lack of any prohibitions on beachwear in Sarasota County, Siesta Key is one place where its evolution occurred naturally without any restrictions.

A century of progress despite beach regulations elsewhere

Women’s swimwear evolved during the past century to reflect changes in the social climate. During the late 19th century, women typically wore wool bathing dresses— a beach frock over a slip buttoned up to the neck and covering the length of the legs. Some women also wore stockings to emphasize their modesty. As the Victorian era was ending, liberation began as the billowy, heavy layers of the earlier swimsuits were reduced to a lighter version. Although these swimsuits still resembled dresses right down to the buttons and were made from heavy flannel or wool fabrics so as not to outline the female figure, a smaller silhouette signaled that the culture was progressing. Changing into them, however, was difficult, especially when done in the backseat of a car parked on Siesta/Crescent Beach— at least until I.G. Archibald built the first bath house there in 1919.

The heroine of swimwear liberation

The first major advance in women’s swimwear can be attributed to one remarkable woman, Annette Kellermann, a polio survivor, internationally acclaimed Australian swimmer, diver, and ultimately a popular actress. Born in Australia in 1887, her story illustrates how women’s swimwear mirrors social changes. Female athletes in the early 20th century showed a special interest in swim competitions, especially in Australia, but were hampered by the required wool dresses. At the age of six, severe weakness in Kellermann’s legs due to polio required her to use steel braces for walking support. When the acute phase her polio infection subsided, Annette was left with the weak, bowed legs. To help her overcome this disability, her parents wisely enrolled Annette in swimming classes. Soon, she was walking without leg braces and by age ten became a competitive swimmer. At age fifteen, she had mastered all strokes and her leg strength had improved to the extent she was winning races.

To improve her swimming performance and help overcome leg weakness, Annette wore a form-fitting one-piece suit. This allowed her to cut through water without being impeded, and it also started a fashion and cultural revolution. Beginning in Australia, and while traveling later in England and performing in the USA, Annette became famous for advocating the right of women to wear a “modern” one-piece bathing suit. She also became well known as a spectacular high-diver and the pioneer of synchronized swimming which she helped popularize after her 1907 performance of the first water ballet in a glass tank at the New York Hippodrome. That same year, however, Kellermann was arrested on Revere Beach, Massachusetts, by two policemen for “indecency” as she was wearing one of her fitted one-piece swimsuits. After a well-publicized public outcry, the charges were dropped as Bostonians decided that if England and New York accepted Annette’s attire, their planned court case was going nowhere.  This dramatic event only served to make Annette even more famous and impactful. The popularity of Annette’s one-piece swimsuits soared and resulted in her developing the first line of women’s swimwear that became known as the “Annette Kellermans.”

Advances in women’s swimwear developed during the 1920s when reckless, pleasure-seeking behaviors naturally stimulated swimwear expressions of the new culture with sleeves eliminated, hemlines up, and the form-fitting upper section tighter. This led to the Bathing Suit Regulations of the American Association of Park Superintendents being enforced in the USA— if a bathing suit was too short, it could result in receiving a warrant from the police. Some beaches even had “bathing suit patrolmen” with tape measures to determine if a woman’s beach attire met the proper length standards and not be more than six inches above her knees. But in the 1930s, knee-length bathing dresses were discarded, legs and shoulders were bared, and tighter fitting swimwear became popular. During the 1940s, hems rose further and one-piece bathing suits appeared with spaghetti-strap tops. Two-piece swimsuits also existed then, but they were high-waisted, covering up the belly button and resembling a miniskirt, while the top was usually a modest halter/bra hybrid that became fashionable on Siesta/Crescent Beach and was featured in tourism and real estate advertisements.

The fashion and fabric revolution after World War II

After World War II and into the 1950s, the next revolution occurred with introduction of the triangle bikini in Paris as worn by French model and dancer Micheline Bernardini and named for the Bikini Atoll, where post-war testing of the atomic bomb was underway. Soon thereafter, the bikini was seen on beaches everywhere, despite the objections of religious organizations. Next, Hollywood became very influential. Bridgette Bardot popularized the bikini in 1953. Then, the “First Bond Girl,” Ursula Andress, made an everlasting impact and skyrocketed bikini sales when she appeared wearing the iconic two-piece she designed for the 1962 James Bond movie Dr. No. The Andress influence was augmented by the 1960s Feminist Movement as swimwear became even tighter with the continued development of stretchy synthetic fabrics of rayon, nylon, and then lycra.

Most recently, as body sculpturing in fitness centers has become popular, a new bathing suit style has emerged with high bikini lines and more skin exposure. The 21st century has become the “anything goes” era with thongs, fishnet, and laced-siding styles, as well as high-cut “extra cheeky” design innovations prominent on Siesta/Crescent Beach. A bolder innovation, the monokini (topless) style, has been featured in Sports Illustrated and seen on European beaches. Undoubtedly, this evolution will continue, and we can expect Millennials in particular to appear on Siesta Key in even more risqué swimwear.

You can read more about swimwear evolution in An Illustrated History of Siesta Key: The Story of America’s Best Beach, which is sold at both Davidson Drugs stores, Captain Curt’s gift shop, and Crescent Beach Grocery.

Click http://siestasand.net/floridita-swimwear-07-18/ to read about a Sarasota swimsuit designer and how she sees the future of women’s swimwear.