What Ever Happened to the Fishing Around Siesta Key? 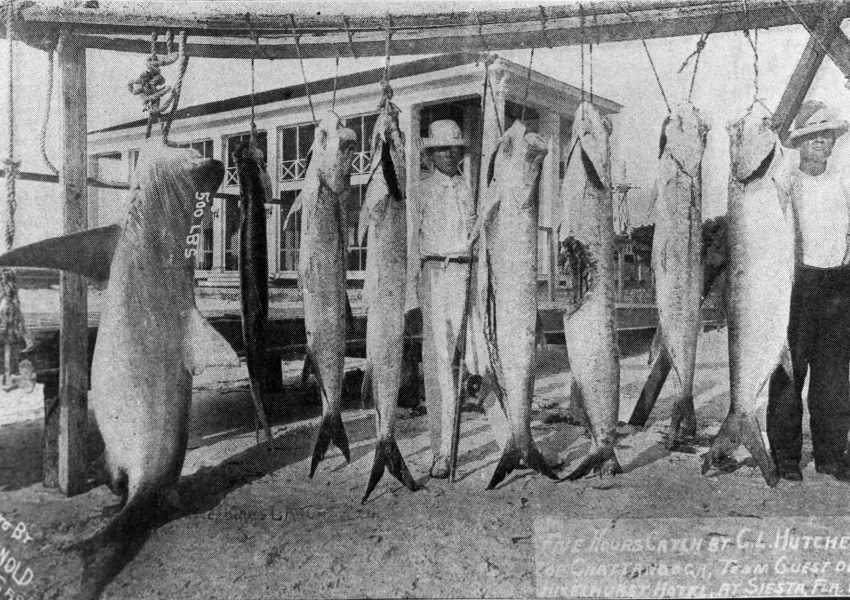 Prior to the 21st Century, Sarasota Bay and the Gulf waters around Siesta Key were incredibly productive fishing grounds for hundreds, if not thousands, of years. As an estuary where fresh river/stream water mixed well with Gulf saltwater in an ideal habitat, Sarasota Bay was abundant in every species of fish and shellfish hungry people would want to eat.

The mangroves were an important part of the ecology as were the tidal inlets when the barrier islands like Siesta Key began to form about 3000 years ago. Thus, the area became a destination for commercial and sport fisherman as the hotels advertised with enticing photographs. All of this has changed during the past quarter-century— primarily as result of destructive human behavior.

The first Floridians, the native Americans arriving 14,500 years ago, were hunter-gatherers who learned how to fish with bone hooks, spears, and nets woven with palm leaf fibers. By the time they migrated to the southwest Gulf coast, the tribes thrived on saltwater and freshwater food supplies.

Fishing Sarasota Bay, the Manasota culture of Amerindians lived on sites spread parallel with the shoreline and feasted on whatever fish was abundant. Shellfish were another easy source of nutritious food and resulted in large piles of shells called middens. Barrier islands like Siesta Key were great sources of clams, oysters, and other shellfish.

After the Manasota tribes were decimated by viral diseases brought by the Spanish invaders, the Sarasota area was sparsely inhabited.  The only attraction was excellent fishing, but it was productive enough to draw fishermen from Cuba and satisfy the descendants of Spanish explorers.

In particular, the plentiful mullet easily caught in nets was an ideal commercial fish when salted for preservation. But much more than mullet could be caught in the estuary between the mainland and the barrier islands of Sarasota County.  There was abundant pompano, trout, red snapper, kingfish and numerous other species. Moreover, the shellfish supply seemed limitless, and all species were delicious and nutritious.

Stepping into history and taking advantage of the Armed Occupation Act, 21-year-old Bill Whitaker, Sarasota’s first white settler, arrived in 1842 after sailing a sloop south from Tampa.  He quickly learned from several Cuban fishermen that Sarasota Bay was teaming with fish, so he established himself in commercial fishing. He caught enormous numbers of mullet when the schools were running in the winter.

Bill observed that these panicked fish would leap in a frenzy out of the water to signal their presence in schools as wide as a hundred yards. The running mullet schools, in fact, were so noisy churning the water that that they actually announced their arrival.

A fisherman as skilled as Bill could fill his boat in a matter of minutes.  The hard labor was actually the cleaning, salting, drying, and packing the fish.  Fortunately, he had a pre-existing, reliable customer base – the Cuban visitors who were happy to buy and offload much of their hard work to return home quicker for the lucrative Lenten sales to Catholics obliged to abstain from meat for 40 days.

Sarasota Bay and the Gulf waters continued to be productive fishing grounds for most of the 20th century. Until recent decades, the estuary around Sarasota provided more than enough seafood for the inhabitants and commercial fishermen. Consequently, there was no need for soup lines here during the Great Depression. In fact, the new settlement of south Siesta Key featured numerous fishing shacks.

The 500-foot-wide, 13 feet deep tidal inlet that became known as Midnight Pass was crucial in promoting estuary water flow/mixing and ensuring a passageway for fishing boats. Even more important, the mangrove forests along the shorelines ensured an ecosystem that maintained water quality and clarity, filtering pollutants and trapping sediments originating from land, while providing essential habitat for fish.

However, disruptions by dredging began as early as 1895 to fulfill the vision of an Intracoastal Waterway for commercial transportation that soon became obsolete when railway transport took over. Although the ICW clearly enhanced economic development, the first dredging destroyed the most prominent mangrove area (“The Mangroves”) near Phillippi Creek. Unfortunately, the last stage of dredging operations during 1962-67 was more destructive, culminating in migration and later closure of Midnight Pass. It is likely that the Bay’s shellfish habitat was destroyed then as well.

The Demise of Siesta Key Fishing in Recent Years

To learn about the more recent problems with fishing around Siesta Key, I interviewed two experienced commercial fishermen— Woody Thames (AKA “Triple Tail”) and Chuck Vanness (“Kingfish”). Both had been quite successful.

Triple Tail has been fishing the area for about 50 years and could catch a “cooler full” of tasty fish within an hour from the Ringling Bridge during the 1960s. Others comment on catching “more than 100 fish” from the Bay bridges during an action-packed morning. Both Triple Tail and Kingfish did very well until 1996, selling their gillnet-caught fish to the Siesta Fish Market.

They commented on the exciting mullet runs that previously fed the Amerindians, Cubans, and first white settler. Mullet schools as long as a mile were fished from approximately Thanksgiving to January, and nets of appropriate mesh size were needed to catch them efficiently. Larger mesh size nets were used for pompano and other fish.

In 1996, however, gillnets were outlawed— a damaging regulatory decision. Its impact was mitigated by crabbing opportunities and charter boat operations. Triple Tail and Kingfish at one time used as many as 1600 crab traps baited with pigs’ feet to catch delicious Gulf crabs and found reliable markets at Walt’s, Captain Curt’s, and several restaurants.

In addition to the overregulation beginning in 1996, Triple Tail and Kingfish attribute the destruction of fishing around Siesta Key to several mistakes related to the impact of overdevelopment, human misbehavior, and huge boats with devastating wakes.

Not surprisingly, the most significant blow has come from red tide, particularly during 2018 when the combination of intensity and duration was greater than ever before. It was shocking for them to see dead dolphins, sharks, and even manatees while fishing between August and November. Even during a strong red tide period in 2003, there was much less impact as the large species were spared.

Its destructive effect last year was significant enough not only to eliminate opportunities for commercial and sport fishing, but also it’s clear that at least 2-3 years will be needed for the fish to return to the nearby Gulf waters. Unfortunately, it will take longer— probably much longer— for great fishing in the Bay to return.

Some self-proclaimed experts minimize the governmental/human impact, emphasizing that “red tide has always been around” and its initiation phase occurs 10-40 miles offshore. There is no question, however, that the 2018 red tide scourge is largely attributable to a cluster of mistakes such as mismanagement of Lake Okeechobee and dumping thousands of gallons of raw sewage and wastewater in Sarasota County. Sadly, fishing appears to be an unappreciated casualty.