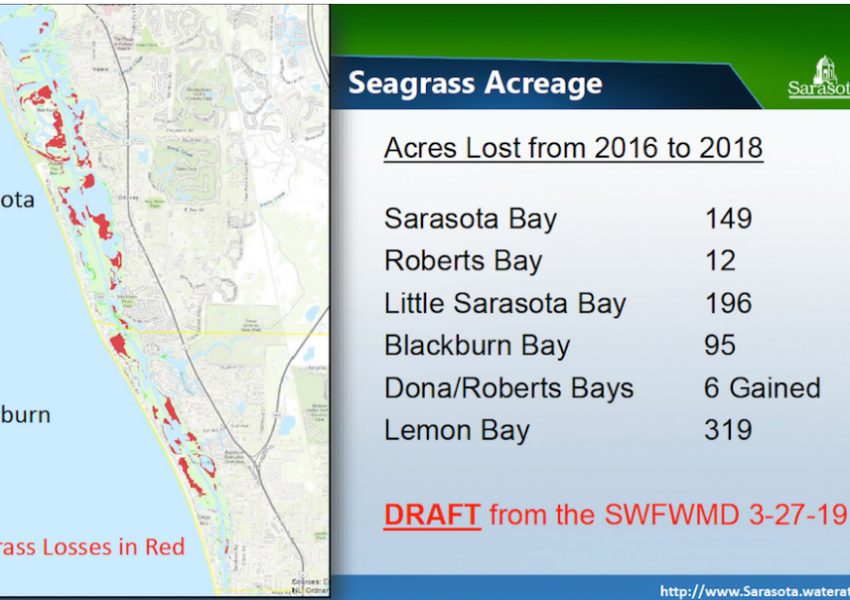 Given the strong fiscal health of Sarasota County, the majority of the county commissioners expressed a willingness to borrow money to put the county’s water quality programs on equally firm footing.

After a comprehensive staff presentation on what has been done and what could be done to reduce the nutrient load going into the county’s waterways — and, ultimately, the Gulf of Mexico — Commissioners Michael Moran and Christian Ziegler indicated a preference for upgrading the county’s three wastewater treatment plants to advanced treatment facilities (AWWTF) at an expense estimated between $70 million and $90 million. The goal would be to reduce the total nitrogen discharge to 3 milligrams (mg) per liter, or less, from the Bee Ridge, Central County and Venice Gardens facilities, Mike Mylett, interim director of the county’s Public Utilities Department, told the board members on May 8.

The total nitrogen load for the Bee Ridge facility is 14 mg per liter; for the Central County plant, 9; and for Venice Gardens, 14, according to a slide Mylett showed the commissioners. A note on that slide said that 2 mg per day is removed from the overall nitrogen load produced by each facility, thanks to deep well injections.

Altogether, the three county wastewater treatment plants, along with facilities in the City of Sarasota, Venice, North Port and Englewood — plus 35 private operations — produce about 624,000 pounds of nitrogen a year, Mylett pointed out, although not all of that goes directly to the bays. (Only the City of Sarasota facility is an AWWTF, according to a chart Mylett showed the board. That initiative cost the city $80 million, he said.)

With the improvements to the county’s three wastewater treatment plants, the slide noted, the total nitrogen load could be reduced to about 298,000 pounds a year.

Red tide research has shown that nitrogen is the primary feeder for the algae that produces the blooms, Karenia brevis.

All of the commissioners talked of the fact that this would be an opportune time for them to pursue the borrowing of money for major projects.

Altogether, staff said on May 8, a variety of proposals — including the elimination of more septic tanks and improvements to stormwater systems — would cost about $310 million. Extra annual operating expenses — an estimated $20 million — would be necessary, as well.

“To me, after hearing all this,” Commissioner Moran began, “I feel that all roads lead back to us moving our community to [advanced wastewater treatment].” That conversion, he continued, would lead to the biggest return on investment for the taxpayers.

Referencing the Comprehensive Annual Financial Report presentation the board heard on May 7 — provided by the Office of the Sarasota County Clerk of the Circuit Court and County Comptroller — Moran added, “Our debt ratios are incredibly fiscally conservative, [and the county’s bond ratings] are excellent. … Our interest rates are at historic lows. … I want the true solution to this,” he told Chuck Walter, manager of the county’s Stormwater Division, “and then we make the difficult decisions.”

“I think Commissioner Moran is right,” Commissioner Ziegler said, adding that he would like for staff to come back to the board with funding options that would lead to the greatest positive results.

Commissioner Alan Maio further pointed to the community pressure on the board to try to prevent a recurrence of the economic devastation of red tide last year, noting “the bludgeoning” businesses took.

As Spencer Anderson, director of the county’s Public Works Department, put it at the outset of the presentation, the red tide bloom that worsened in early August 2018 and persisted for several more months “was crippling, to say the least,” to the county’s economy.

Commissioner Nancy Detert asked staff members for detailed cost estimates — including the potential expenses to homeowners of specific proposals — and information about sources of revenue. “I think we need to put our plan into effect while we can still borrow really cheap.”

In response to a question from Detert, Walter said that over the past six or seven years, the county has received about $50 million from various sources for water quality initiatives.

The board members further concurred that they will need to make decisions about exactly how they want to proceed as they hold discussions in June during their workshops on the 2020 fiscal year budget.

On May 8, Chair Charles Hines emphasized that the commissioners must make sure the members of the public understand that they can expect higher costs pegged to new county initiatives.

One funding option that Walter, manager of the Stormwater Division, proposed is a county assessment on property owners, with the revenue dedicated to improved water quality. Staff would like to explore that, Walter said. If the county had funds from such an assessment, he explained, “Then we would have a significant bonding component right upfront.”

Walter meant that the county could pledge the revenue from the assessments to debt service for bonds.

During his part of the presentation, Walter also cautioned the board members that if they do not pursue measures to improve the quality of water in the bays — in the face of demonstrated seagrass loss — then it is likely they will have to contend with state and federal regulatory action dictating the steps they must take to achieve specific goals.

A slide Walter showed the board said that from 2016 to 2018, Lemon Bay lost 319 acres of seagrass; Little Sarasota Bay, 196 acres; Sarasota Bay, 149; Blackburn Bay, 95; and Roberts Bay, 12 acres. Those estimates came from the Southwest Florida Water Management District on March 27, the slide noted.

Only Dona Bay has seen an increase in seagrass acreage, thanks to county initiatives over the past years to improve its water quality, staff has explained.

Commissioner Detert talked of her desire for the commission to act on its own before such regulatory oversight might become necessary.