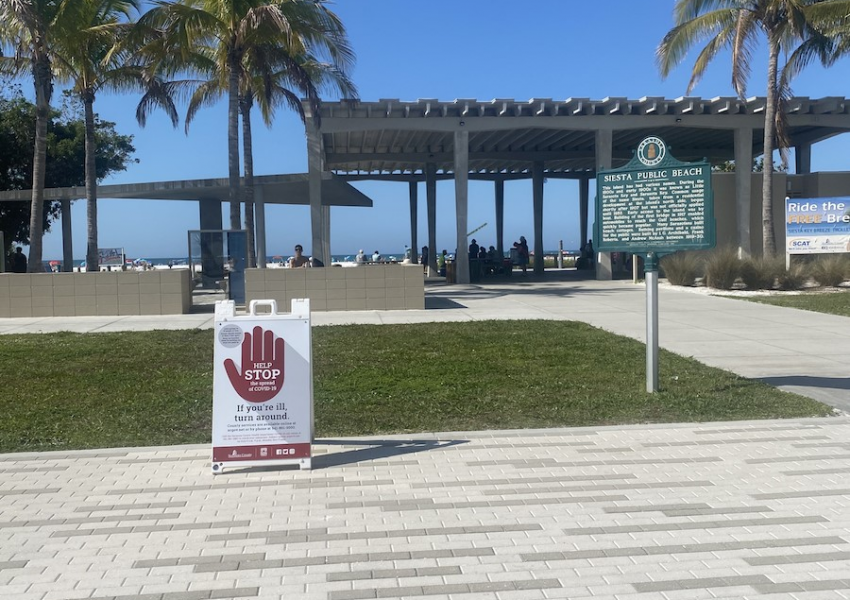 As of 6 a.m. on Saturday, March 21, all Sarasota County public beaches will be closed indefinitely, County Administrator Jonathan Lewis announced during a March 19 press conference.

County leaders’ concern, he said, has been that closings of beaches in other communities — especially in South Florida — would drive more visitors to the shoreline on the west coast of the state, including Sarasota County beaches.

“I traversed the beach from our southernmost point to our northernmost point today,” Lewis said. People have been doing “exactly what we’ve asked of them,” he added, which is gathering in groups of no more than 10 people and sitting at least 6 feet from other groups. People have been listening to the direction Gov. Ron DeSantis and health officials offered earlier in the week, Lewis emphasized.

“Unfortunately,” he continued, “we’ve been very worried [about the potential impact of beach closures in other parts of Florida]. … We’re worried about the gridlock that might come into play.”

“Our residents have been fantastic,” Lewis said, “and we will keep that in mind. … We will do our best to keep this closure as short as possible.”

“Sarasota County is known as a wonderful place to visit,” Lewis pointed out. “We don’t want to change that.”

“We will work on securing those facilities,” he added of the county’s beaches. County staff has been collaborating with the

Sarasota County Sheriff’s Office and other law enforcement agencies, he noted, as well as municipal leaders in the county.

Parking lots at the beaches will be closed, he pointed out, and signage will be set up on U.S. 41 to alert residents and visitors headed to Siesta Key that they will not be allowed in the beach parking lot.

Further, “We will continue to have staff out there to keep an eye on things,” Lewis added.

Rich Collins, director of the county’s Emergency Services Department, pointed out, “Lifeguards continue to work diligently to keep our beachgoers safe.” They will remain on the beaches after the Saturday closure, he said, working from 10 a.m. to 4:45 p.m., “specifically to … keep people safe” and to tell anyone who shows up on the beaches that they are closed.

Collins also noted that large signs will be erected at Siesta, Lido and Turtle beaches, as well as the multiple beach accesses on Siesta Key, to alert people to the situation.