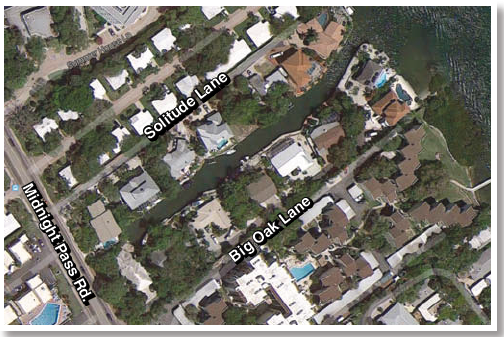 A mix of old and new canal homes
By Roger Drouin 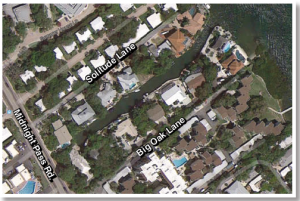 subdivision, and they share a canal that runs between the two streets.

The neighborhood has a mix of new and classic homes. There are just fourteen homes that range from just-built construction and 1990s construction to older built in the 1960s and 70s. Some of the older homes have been remodeled or 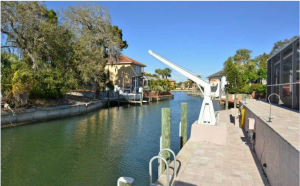 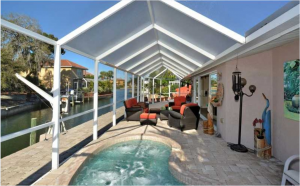 All of the homes are waterfront and many feature pools.

The single-family neighborhood is nestled among lush landscaping and nearby condos. To the north it is close to the new Summer Cove Condos on Siesta, completed in 2007, and Peppertree Bay; to the south it neighbors Moonmist Circle villas, Siesta Harbor, and Midnight Cove.

The typical buyer looking at a home here is one who is seeking the “whole Siesta Key lifestyle,” said Karen Greco, a realtor with Michael Saunders & Company who listed a home that sold in February, 2014. The location allows owners to ride their bikes to the beach and have quick access to the bay.

One of the homes in Secluded Harbor was built in 1969 by developer Ruth Richmond, on Big Oak Lane. Richmond became known for quality, concrete-block construction and for introducing home elements that have become essential aspects of a Florida home — such as screened lanais and sliding doors that disappear behind the walls, letting in open light. The developer was one of the first to feature “greenhouse windows” above the kitchen sink.

The 1969-built home, located canal-front and three houses from the Intracoastal, sold in February, 2014 for $680,000, or $334 a square foot. It features three bedrooms and two baths, and of course a greenhouse window and large sliding doors. As with many Ruth Richmond homes, the home has an open floor plan, and plenty of outdoor space.

“It was completely redone,” said Greco, the listing agent. “The kitchen had granite countertops and the master bathroom had a walk-in shower and double vanity. The entire backyard is pavers and has an outdoor fireplace. It is a beautiful outdoor area.”

The buyers were from Minnesota. “They absolutely love it here,” Greco said.

The home also had a new metal roof installed in 2010, and in 2002 a new air conditioning system and duct work was upgraded.

Other Ruth Richmond classic homes are sprinkled all over the key, both waterfront and non-waterfront, Greco said. “It is a great classic house,” the Realtor said of this style of home. Many of these homes are being torn down to make way for new construction, or are being upgraded as was the case with the home on Big Oak Lane.

Over on Solitude Lane, a two-floor home offers a contrasting style of waterfront living.

This brand-new concrete-block home was completed in May. The home features an elevator, outdoor shower, heated pool, separate kitchen pantry, thermal windows, and high efficiency appliances. It has five bedrooms and four baths at 2,894 square-feet. The home has a second-floor balcony overlooking the pool and canal.

The home is four houses away from the Intracoastal.

half bathrooms at 2,819 square feet. It was built in 1991. The home has an open floor plan with a dramatic 2-story great room and a two-sided fireplace that is shared by great room and family room. The home faces the Intracoastal.